The Maw is a game that I have been looking forward to for some time now. One of the PAX 10, ten independent games selected for showing at last year’s Penny Arcade Expo, it won the hearts of those in attendance and was given the Audience Choice award. The developer, Twisted Pixel, is trying to fill a niche on Xbox Live Arcade by delivering a platformer with high production values to a service which frequently lacks both.

Now that it has been released on XBLA, there’s only one question worth asking: Is The Maw a satisfying meal or will it leave gamers with heartburn?

Hit the jump for our review. 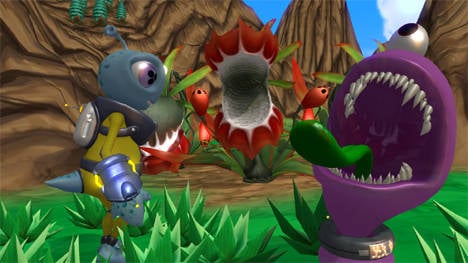 The Maw (XBLA)
Developed by Twisted Pixel
Released on January 22, 2009

The Maw is the story of Frank and Maw, two creatures who have been placed in captivity by an advanced race for what appears to be some kind of interstellar zoo. There is very little time for exposition, however, as the alien craft they are being held in begins to crash shortly after the pair meet face-to-face in the opening sequence. Trapped on the surface of an unknown world, the duo must work together to escape their captors.

The first thing one notices about The Maw is how beautiful it looks and sounds. The planet’s surface is vibrant and full of life. Plants rustle in the breeze and shudder as the characters move over them. The assorted creatures are all distinct and charming, with their own mannerisms.

Frank and Maw are very expressive characters who have no need for dialogue, as it’s apparent throughout exactly what they are thinking. Maw, in particular, has some of the best body language I have ever seen in a game. The range of emotion Twisted Pixel have managed to instill in a one-eyed, purple blob is nothing short of astounding. He’s like a Katamari with personality. 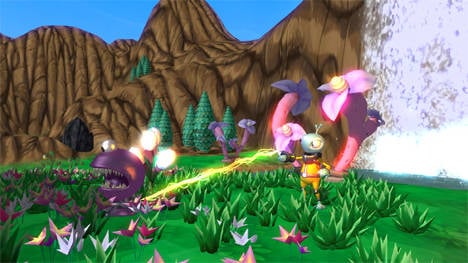 The player controls Frank, as Maw is a force that no man could truly contain. Early on, Frank acquires a sort of electronic leash with a multitude of uses. While you will spend most of the time using it to guide Maw around, it can also grab creatures and objects and then throw them or pound them into the ground. The leash is very easy to use, with one button for interacting with Maw, another for grabbing things which are not Maw and two buttons for interacting with things which are not Maw once you’ve grabbed them.

Levels have one real goal: Feed Maw creatures until he’s large enough to proceed through the exit. Most of the levels also feature some sort of obstruction at the exit which must be overcome by making use of an ability Maw has acquired in the course of his feeding frenzy.

The most basic animals are puffballs that can simply be consumed. Others require intervention from Frank to make them palatable to the ravenous blob. This could mean pounding creatures into pavement to remove a shell, baiting beasts into injuring themselves or other means of removing their natural defenses. 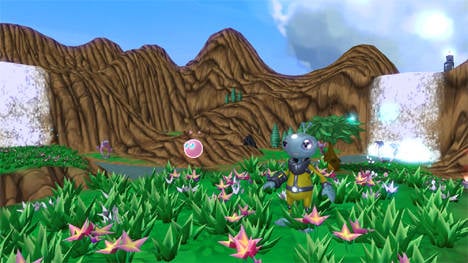 With the additional effort required to eat most enemies comes rewards. The much-lauded, core gameplay element revolves around Maw acquiring traits and abilities belonging to creatures he has consumed. As he eats, he gains the ability to breathe fire, can become lighter than air and give an electric charge to certain animals. These provide a bit of a puzzle element, as you must figure out how to get powers for Maw and then how to apply them to exit the level.

New abilities will drastically change Maw. He will take a form which resembles the animal he has consumed. What is interesting to note is that his personality seems to shift as well. One of the most notable moments I had playing the game was after he ate a peacock-like beastie. Along with his new form, I was delighted to see that his movement changed to that of a proud strut. It’s all part of the charm imbued into every aspect of this game.

The game is very straightforward and highly entertaining. Most levels include platforming bits that only Frank can accomplish, which usually result in acquiring a new power for Maw. The blob can only have one power at a time, but it’s never really an issue as the game is completely linear in nature and there is rarely an instance where you use two powers in the same level. 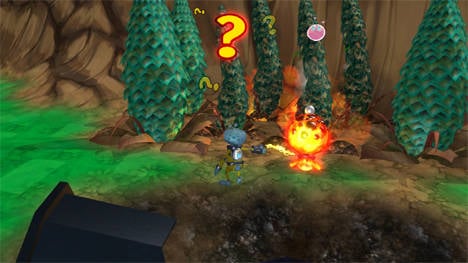 While The Maw is billed as a game, the amount of interactivity is not great. Much of it feels like a series of quick-time events, with button prompts appearing near your character for just about every action that requires even the slightest amount of timing. Part of the reason for this has to do with the number of ideas Twisted Pixel tried to cram in, requiring new prompts to tell you how to utilize them. Up through the last level of the game, new elements continue to be introduced. Most of these concepts are used in a single level, never to be revisited.

This relates to the largest issue with The Maw. There simply is not a whole lot of content here and it fails to really explore its depth. The entire game can be completed in roughly two hours, with an extra half hour or so if you want to revisit levels to snag the few achievements you didn’t get the frist time around. It’s an amazing two hours, make no mistake, and will make even the most cynical gamer smile. If they are willing to invest the cash on such a brief experience, that is. 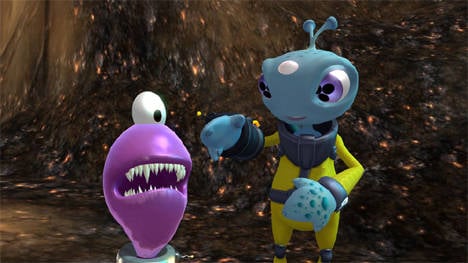 What Twisted Pixel has really accomplished here is creating the equivalent of a Pixar movie with interactive elements. And, at roughly the same cost as (or, in many cases, less than) a DVD, fans of that style of animation and storytelling should be more than satisfied. It’s disappointing that more levels are not available, as it would be great to have complex sequences which require Maw to change powers more than once in a level. Still, it is one of the most unique gaming experiences in recent memory and one that I would recommend in spite of its shortcomings.