I must confess that I am terrible at watching movies and never got into comic books as much as I’d have liked, so when The Incredible Hulk: The Official Videogame was found sitting on my doormat, I wondered whether or not I’d be able to eke some fun out of it or if I’d end up suffering License Hell in order to give you your review.

The results are in, and actually refreshingly pleasant. Hit the jump as we take Ed Norton and his wacky pals out on a destructive daytrip around New York City, fighting Tim Roth, some supervillains with stupid names, and scientists that think dressing up like Master Chief makes them look less geeky. 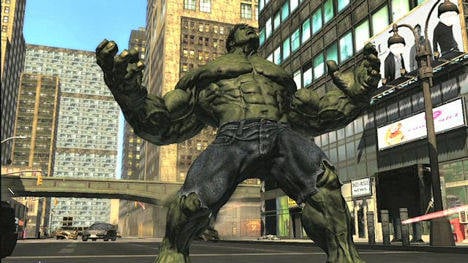 I’m told the main plot of the videogame pretty much follows that of the movie which I haven’t yet seen, and probably won’t until I accidentally stumble across the video on DailyMo … I mean, legally purchase it from a respectable supplier of disc-based cinematic products. Ed Norton plays the lovable gamma-radiated Bruce Banner who turns into his green-skinned, car throwing alter ego, The Hulk, whenever he’s angry.

Norton must complete tasks around New York City in his race to find a cure, as well as outwit the US Army and Tim Roth who want to use him as a weapon. Meanwhile, a shadowy entity known as The Enclave is using Manhattan as a test site and a group of similarly irradiated evildoers, The U-Foes, are causing perpetual havoc. Also, Hulk smash. 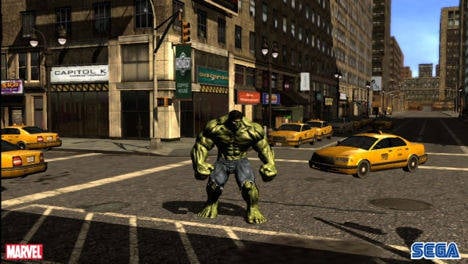 The Incredible Hulk takes a cue from other Marvel film licenses, which has the same plot as the movie but throws in extra baddies from the comic books to keep fans well serviced. Of course, this means little to me, but The Enclave are pretty cool guys who doesn’t afraid of anything (this sentence is deliberate and is based on a meme. I should have realized I’d have to explain it and ruin everything because otherwise people would think I don’t understand words. Wankers.)

Sega’s offering will seem familiar to those who enjoyed the last Hulk game or were fans of the sublime Crackdown, and while it’s not quite as open or fun as Crackdown was, once The Hulk is let loose in New York, it becomes an instant joy to start smashing up buildings, throwing cars around and jumping from really high places to smash everything below.

To aid him in his quest, The Incredible Hulk is armed with pretty much nothing save his own body — but that’s more than enough when you’re a giant green bastard with a questionable haircut. Using simple button combos, Hulk smashes, punches and grabs anything he can get his hands on, from enemies to the scenery. He can use bits of broken buildings as a shield, smack people hundreds of yards into the distance with cars, or even throw foes into their allies. The more destruction Hulk causes, the more his “rage” meter fills, which allows him to pull of special moves such as a handy healing factor or a smash attack which pounds the ground and damages all around him.

As Dr. Banner creates havoc, he’ll attract attention from the army, and if you choose not to lay low, you’ll soon find yourself assaulted by tanks, helicopters and soldiers in a variety of annoying mechanical suits. Enclave and U-Foe members also periodically show up to cause trouble in the city.

The Incredible Hulk employs an enjoyable feat system, an internal set of achievements which may confer in-game rewards on Dr. Banner, such as improved jumping, or the ability to smash a car into two giant metal gauntlets. Many of these are standard (“kill X amount of enemies”) but some are rather fun, such as jumping great distances or finding and climbing the highest buildings of New York. 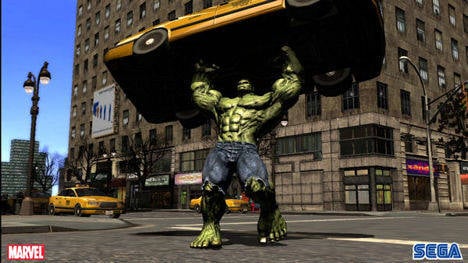 As much enjoyment as Hulk can deliver, however, it can grow rather tedious after a while. The various missions and minigames dotted around the city are entertaining, but this is not a game many people will stick with for hours on end and feel like it’s completely fresh. Throwing enemies into each other loses its luster once you realize there’s very little else to do with them. Combat can grow simplistic, even with the extra benefits and moves that appear, and trickier enemies usually require repetitive tactics to dispatch.

The Hulk also doesn’t feel all that Hulkish when you control him. He’s certainly big, but he doesn’t quite come across as a heavy musclebound powerhouse. His controlling is very loose and there’s no sense of weight when he’s running. He also looks ridiculous when he jumps, but that’s simple nitpicking.

Graphically, the game is pretty standard for this current generation (which isn’t a bad thing). The likenesses of the movie’s stars such as Roth and Norton are rather well realized and they also, naturally, provide the voice acting. The game suffers from some pretty brutal framerate issues and pop-up, however. Action can become a chugging, stuttering mess for several seconds at a time, especially if you do a lot of leaping about, which can really break the flow of the things. 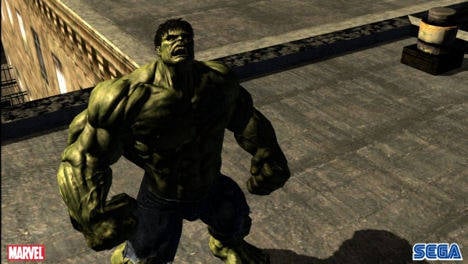 If you’re a fan of The Incredible Hulk or have enjoyed previous Marvel-based games, you could certainly do worse than picking up The Official Game. Even as a non-fan, I’ve been finding my time as the jolly green git rather enjoyable and have found plenty to like about it. It’s definitely worth a weekend’s smashing and bashing, at the very least.

Score: 7.0 (Good. Replayable, fun, but nothing innovative or amazing. The game potentially has large flaws that, while they don’t make the game bad, prevent it from being as good as it could be.)