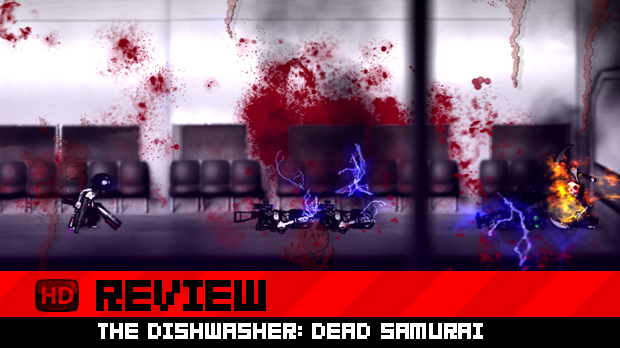 It has been over a year since gamers were given the opportunity to check out the XNA Community Games demo and I think it’s safe to say that one game clearly outshined all of the competition. The Dishwasher: Dead Samurai was far and away the most complex, challenging and fun title demonstrated there, let alone the most polished.

And then things went dark. With little to no word about the status of The Dishwasher from when the demonstration period ended until the game’s release, I was starting to worry that it had disappeared off the landscape altogether. Week after week of waiting to see this game again gave way to despair and, eventually, acceptance that its time may never come.

But its time has come indeed. Jordan and I have put the game through its paces and we’re ready to tell you if it has lived up to the promise of being one of the finest offerings XNA developers have brought to the table yet.

The Dishwasher: Dead Samurai is a fast-paced, frenetic brawler the likes of which we rarely see in 2D. The titular character’s story revolves around… actually, I have absolutely no idea what the story really is. The Dishwasher was an actual dishwasher in a restaurant but he was also a samurai and was killed by the robotic underlings of the controlling global power. Mysteriously resurrected, he has sworn vengeance against his killers and seeks to topple the evil world overlords. At least, I think that’s how it goes.

It could be the most brilliant tale of revenge ever written and I’m just not seeing it, but the occasional comic strips that break up the action are vague and kinda pointless. The writing is overwrought and needlessly dramatic but I will give credit to the art style used throughout these panels and the game as a whole. It is dark, striking and more effectively conveys the smoldering rage of The Dishwasher than the laughable text which accompanies it.

It doesn’t really matter anyway, outside of having something to skip before you go and kill more robots, because the combat is quite clearly where a lot of James Silva’s energies went in developing the game. Starting only with a purloined set of cleavers from his former place of employment, The Dishwasher slices, dices and makes Julienne fries out of everything which comes into his path. New weapons arrive early and often with four additional implements of destruction becoming unlocked during the story mode’s fourteen levels, including a katana, a chainsaw and guns.

Also unlocked early in the story mode is the ability for a second player to drop in locally for some co-op action. The second player doesn’t have to deal with the same sort of pressure as the first player, as their death only takes them out of the action for a brief period of time before they can hop back in (albeit with less than full health). It’s great for when you have a friend show up unexpectedly or if you need a little help getting through a section and, like all unlocks in The Dishwasher, it carries over into any new game you start after gaining the capability.

The Dishwasher also has some potent magical attacks at his disposal. Earning four “Dish Magic” spells through the course of gameplay with varying effects, these generally boil down to being smart bomb attacks which deal a significant amount of damage to enemies in their wide area of effect. Sure, one spell might explode outward in multiple directions while another only fires forward along the ground, but it’s difficult to tell the difference between one spell and another as they all seem to do much the same job.

As you progress, you’ll collect spirals from enemies. Achieving certain challenges, such as defeating a group of baddies within a time limit or completing a rhythm-matching minigame. These can be spent at one of the game’s many computer terminals for a boost in your maximum health or Dish Magic meters. They can also be traded in for upgrades to your weapons which unlock new combos and increase damage.

The Guitar Hero-like minigame is a nice little diversion that breaks up the action and gives a little breathing room. As has been reported previously, you can even use a guitar controller to play these sequences, which seems like a nice touch but winds up being a bit impractical and most players won’t even bother with it. Of course, if a guitar controller is connected to the Xbox when you start one of these, it defaults to the mode which uses it, which might annoy unaware folks (like this reviewer) who tend to just leave their peripherals plugged in all the time.

In addition to the story, there’s a considerable amount of content to play. The arcade mode, which can be played alone or in multiplayer (online or local), has fifty scenarios available. And, for the really hardcore, a survival mode with leaderboards is available.

The combo system for attacks is deep and satisfying. Each of the five weapons available to you have around a dozen combo moves you can achieve with them and moves can be chained to other moves or even other weapons with a quick press of a button. Interestingly, the game encourages you to stay your hand a bit when pummeling foes. Once an enemy has been weakened near the point of death, a prompt appears giving the player an opportunity to perform a killing blow. Using the correct attack is important, as properly killed baddies drop much-needed health.

The system places an emphasis on skillfully dispatching enemies instead of merely laying waste to them and it works great. You have to train yourself to stop at the right time or you’ll kill the vast majority of enemies without gaining the benefits of doing so.

With six difficulty levels for the story, the scenarios and survival modes, The Dishwasher: Dead Samurai is a game you could be playing for a very long time indeed. It’s a good thing that it’s so much fun. Killing robots is consistently entertaining with the game’s tight controls and higher difficulty levels are quite hard indeed. If you’re in the mood for a little wholesale slaughter, you could certainly do much worse than this one.

The Dishwasher: Dead Samurai has been a relatively strange experience for me. Initially, when a slice of the game was released as a playable demo for the XNA initiative around a year ago, I was ecstatic to take it for a spin. Flash forward to a few weeks ago when the title finally debuted on the Xbox LIVE Arcade, where I was anxious to spend my 800 Microsoft Points, but came out somewhat dissatisfied at my first hour or so of play time.

I had opted to go with normal difficulty my first time through, which was apparently a horrible move; once The Dishwasher’s gas mask-wearing, grenade-throwing enemies came out to play, they whooped my ass, in a big way. I like to think of them as the equivalent of Castlevania’s flying medusa heads — they aren’t particularly hard to kill alone, but when a few come at you at once, there’s going to be trouble.

Anyway, because I had refused to use the game’s rolling mechanic (this move varies from weapon to weapon) to dodge the aforementioned grenades, and had instead decided that spamming the same three moves repeatedly was nothing short of brilliant, I died. A lot. To the point where I was completely turned off from playing until later on that same evening. No, I’m not just telling you about my misfortune because I enjoy making a fool out of myself — rather, this is a good example of why senseless button mashing does not work very well.

Once the game brings out some of its stranger and more deadly monstrosities, like the undead kamikaze cyborgs, for instance, you have no choice but to A) dodge or teleport to avoid fire, since there technically is no ducking and B) pay attention to visual cues, especially when it comes to pulling off stylized finishing attacks and not getting your ass handed to you by the many bosses that infest The Dishwasher’s twisted world.

Speaking of bosses, I must give props to James Silva for bringing such a variety in character design to the table. Figuring out the best way to take these bad boys down was easily my favorite part of the game, simply because it brought me back to the days when I actively played games like Kirby Super Star, Donkey Kong Country 2, Mega Man X, and Yoshi’s Island. Evoking such a wonderful feeling is not easy for a developer to accomplish, and it’s sadly a rarity these days as most companies have strayed away from making bosses challenging enough for the more skilled gamers out there.

It’s also worth mention that The Dishwasher presents some of the most satisfying moments in recent memory.  Because of the way in which enemies are presented — wave after wave of baddies to the point where you will constantly be eyeing your health bar in absolute fear — the feeling you get upon clearing out almost any given room is absurdly refreshing.

Besides that, there are a few parts where your friend the insane Chef makes a quick appearance (yep, the story makes no sense, but it doesn’t have to), and he quite literally obliterates foes alongside the Dishwasher as you try to figure out what’s transpiring on your television set; if these sequences weren’t as badass as they really are, I wouldn’t even be mentioning them right now. Trust me, when you see it for yourself, you will gush joy too.

While progressing through the main story mode is enjoyable — minus attempting to make sense of the game’s vague story — the arcade mode is definitely where most of your time will be spent.  Being able to quickly load up a level where all you need to do is “kill X amount of enemies” and get the highest score possible is pure, over-the-top gore-filled bliss. The replayability of this game is much greater than the average XBLA release, and for that I am greatly thankful.

While I have been quick to point out all of the positive aspects to The Dishwasher, of which there are many, I feel obligated to reiterate that the game’s learning curve will be borderline maddening for some of you, and for whatever reason, there’s screen tearing in a few of the later levels. It’s not a constant issue or anything, but it is worth bringing up. Lastly, while I agree with Conrad on the guitar minigame being good for a break, it gets extremely old, and if it wasn’t for the fact that I’m a whore for points, I would have flat out skipped the damn things. But now I’m beginning to nitpick, so I’ll shut up already and allow you to resume doing whatever it was you were doing prior to reading this review.

For $10, the amount of content easily justifies the purchase for anyone who wants a solid 2D action game with a gritty yet strangely charming look to it. I would recommend downloading the trial for those who fear The Dishwasher may be too difficult to handle, but please remember that the game shines the brightest when you have all of the weapons unlocked and are tasked with fighting more than two or three starter enemy types — don’t let the demo’s simplistic nature fool you.