[This is just one of the new games available in The Orange Box. Don’t forget to read our reviews of Episode Two and Portal, and keep your eyes peeled for forthcoming console reviews.]

First, we gave you our impressions of the beta. Then, we taught you how to not look like an idiot in it. Now, finally, we’re reviewing the damned thing — it’s Team Fortress 2.

And so, without any further ado, hit the damn jump and read the damn review.

About three weeks ago in our impressions post, I called Team Fortress 2 the best multiplayer game I’d ever played.

Graphically, there’s nothing to complain about. The cartoonish, stylized graphics are absolutely gorgeous, and totally fitting with the game’s over-the-top gameplay style. Whether you’re watching a rogue Spy get gibbed by a stray rocket, or looking at the Heavy Weapons Guy’s facial expression as he shouts insults at his enemies, TF2’s aesthetics are always lighthearted without becoming childish, as well as wonderfully violent without being needlessly gruesome. Aesthetically, there’s really nothing to complain about — the Blue Sky Campaign should be pleased. Team Fortress 2’s commitment is to fun, plain and simple; this can be seen in nearly every aspect of the game’s design, from the graphics on up. 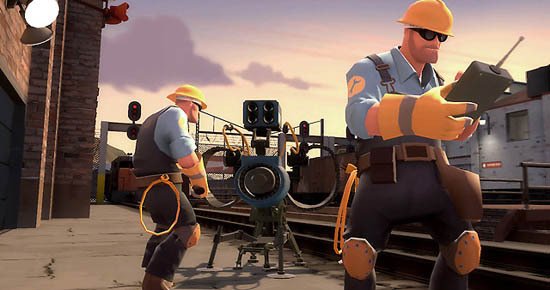 Valve’s commitment to this, how you say, fun, can be seen most immediately in the changes they made to the Team Fortress formula. Gone are the class-specific grenades which were so frequently and uselessly spammed in the first game; gone are the Medic’s irritating poisoning attack and his equally irritating healing pack; essentially, gone is anything which infringes upon the sheer joy of engaging in a competitive, multiplayer gaming experience. I really appreciated little touches like the “nemesis” system (if a person kills you three consecutive times, they become your official Nemesis and you are rewarded more points for killing them), or the way the game constantly keeps track of your statistics. While these little additions and subtractions to the formula might not seem like they make much of a difference, they simply make the game a great deal more interesting and (sorry for repeating myself, but there’s really no other word for it) a great deal more fun.

In terms of actual multiplayer gameplay, Team Fortress 2 doesn’t really include anything you haven’t seen before…but that doesn’t matter. Yeah, the game is mainly comprised of Control Point dominations with a side helping of Capture the Flag — gameplay modes we’ve all played a hundred times — but you’ve never seen these old multiplayer formulas executed so damn efficiently. The character classes are incredibly diverse, and extremely well balanced; with the exception of the Pyro (a character whom the developers can’t seem to decide on a fixed deadliness level for), no single class is truly better than any other, and every single character provides a fun and unique gameplay experience. 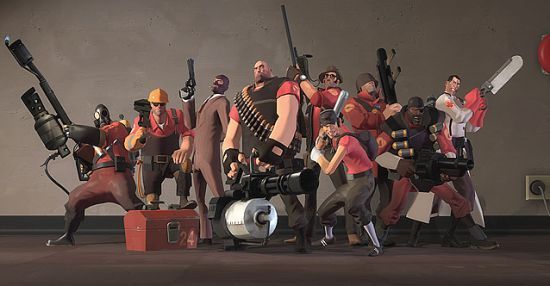 I realize, of course, that a phrase like “every character class provides a fun and unique gameplay experience” has been affixed to every multiplayer combat game since SpaceWar with varying levels of truth behind it, but TF2’s class system is the real deal. Having just completed a ten part series on the intricacies of each class, I can tell you, without the slightest hesitation, that each character is useful in his own special way. One might assume a game with nine —  count ‘em, nine —  different character classes might include a few duds. This isn’t the case, I’m happy to say. I still rely on the Spy more than any other class, but I can switch to Scout or Demoman at the drop of a hat and still enjoy myself.

Because of this wonderful balance in the classes, the game is truly more teamwork-oriented than most you’ll find on the market today. This is not Counter-Strike; a player’s worth is not measured in his ability to pull off headshots or how fast his trigger finger is, but in how well his team benefits from his presence. Team Fortress 2 is a game of strategy: utilizing the strengths and weaknesses of each class is a far more important skill than simply having quick reflexes or a steady hand (not to say that those don’t help, though).

The maps themselves are also a great point of interest. The decreased respawn times for a winning team help prevent stalemates; if you listen to the commentary, the Valve team seems frigging disgusted at the idea of stalemates. Every single map includes class-specific structures or geographic landmarks which can only be used by certain classes, giving every different character a specific locational advantage in any given map — Scouts can double-jump across wide open areas, Soldiers can rocket-jump to higher areas, etcetera. Yet perhaps most interesting than either of these design choices, and more woefully underused, is the “fluid level” idea found on a map like tc_Hydro. Between rounds on Hydro, certain passageways will open or close and the locations of the control points will change; while remaining within the confines of the Hydro map, the level changes multiple times and provides a different play experience after every single round. Hydro is really four or five maps in one — which makes it all the more irritating that it is the only map in the current version of the game with this mechanic in it. The fluid level system is so fun, and creates such replayability within a single map, that the Control Point maps like Well or Granary can seem downright monotonous by comparison (especially if you play the game frequently for a couple of weeks straight, which I have). 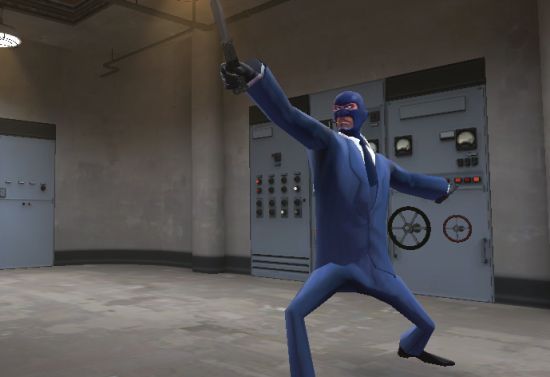 This eventual monotony of the maps, when you come right down to it, is the only thing I can really complain about — but it’s not a negligible one, to my mind. Six maps, while understandable and sufficient for a game which has just been released, can grow old rather quickly in a game like Team Fortress 2. It’s not that the maps are badly designed — they aren’t — but the game’s intensely fast-paced style necessitates very short rounds and, subsequently, reasonably short times on any individual map. The maps are great fun, of course, but within a week or two of first playing the game, you’ll have made it through each make at least twenty times and, sooner or later, they’ll begin to grow noticeably tiresome. Of course, any map in any multiplayer game will eventually get old with enough extended play, but I was rather surprised to find myself getting a little sick of Gravelpit and Well after just two weeks.

Of course, this problem will be remedied eventually; sooner or later, Valve will hopefully release some more maps and the modding community will eventually create some balanced, memorable maps. As it stands right now, though, the map monotony is a point I can’t ignore.

Overall, Team Fortress 2 is a truly great game. It’s fast, it’s fun, and it’s easy to get into but holds a great deal of death within its nine different character classes. Yeah, there aren’t enough varied maps yet, but that shouldn’t stop you from buying this game and playing the living hell out of it. At the end of the day, Team Fortress 2 is still the best, most balanced, most entertaining multiplayer game I’ve ever played on the PC. If you haven’t yet purchased The Orange Box and were curious as to how TF2 affected the package as a whole, don’t hesitate for even a second — even if you ignored how incredibly good the other titles in the Box are (and the immensely satisfying way in which TF2‘s multiplayer-only gameplay counterpoints the singleplayer-only Portal and Episode Two) Team Fortress 2 would still be worth a purchase.