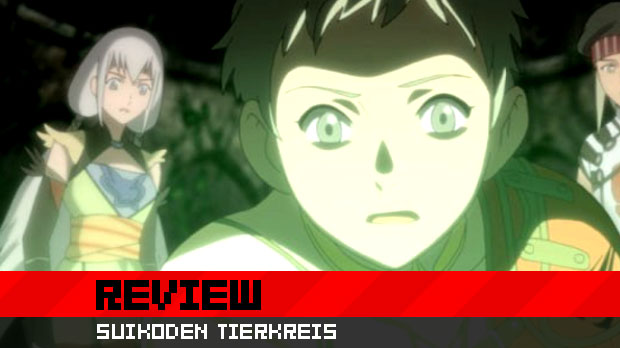 Konami’s Suikoden series is one of the most venerable and respected RPGs of all time, which is quite a feat considering some titles in the series have become such rare and expensive collector’s items that only the lucky and the rich can get hold of them. With the Nintendo DS being one of the last true strongholds for Japanese RPGs, it makes sense that Suikoden would eventually find its way onto the handheld platform.

Suikoden Tierkreis deviates a little from the main games, but it’s definitely got the same spirit. However, with Suikoden purists greeting the game with cynical trepidation, does this DS debut deserve to bear such a respected name, or is this a cheap stain on the franchise’s history?

Read on as we review Suikoden TierKreis. 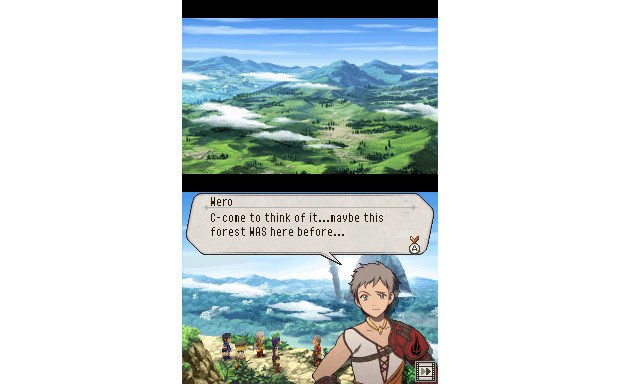 Suikoden Tierkreis tells the story of a young hero and his friends who discover a mysterious book while out hunting. After touching the book, our hero starts to realize strange things about his world, such as the fact that a forest just suddenly appeared out of nowhere, despite claims by others that it’s always been there. As the story progresses, the hero learns that he is a Starbearer, and gets tangled up in a war against a sinister group called The Order, who believes that all things are predetermined and is trying to force the world to believe the same thing.

The story for Tierkreis is surprisingly strong despite its lame opening moments and is certainly one of the most interesting JRPG plots I’ve seen in a long time. There are distinct shades of gray, with allies proving themselves to be not completely heroic, and villains who may be trying to achieve more noble goals than appearances suggest. Unfortunately, the strong story is harmed considerably by some questionable dialog and some of the most unnervingly rushed voice acting I’ve ever seen.

It sounds like dialog was recorded during somebody’s lunch hour, since nearly everybody seems to be in a rush to finish speaking, sometimes even deviating from what the text claims they’re saying. In one scene, the spoken dialog and written dialog were almost completely different, with the voice acting making no sense whatsoever. The high pitched voices and tinny distortion also means that many characters sound like Orko from Masters of the Universe, which makes it difficult to take scenes seriously. 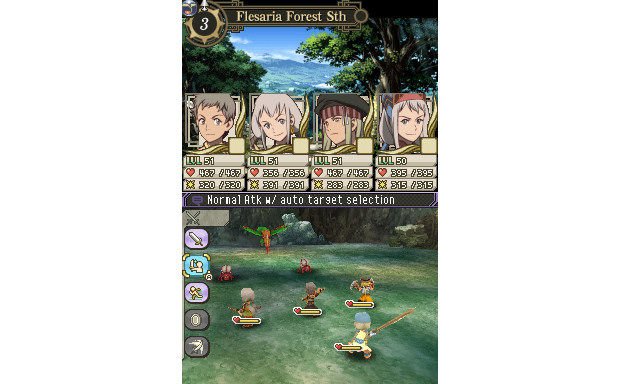 The poor voice acting certainly puts a dent in Tierkreis‘ story, but it’s still quite an enjoyable ride that should suck players into the game world. Some moments are genuinely rousing, and the potential commentary on organized religion gives one pause for thought. The game also remains somewhat lighthearted throughout, never taking itself too seriously and introducing a fair amount of surprisingly likable characters.

As far as the gameplay goes, there are many things that Suikoden players will find familiar. Much of the game takes place within a castle which will slowly grow and get more impressive with time, as the hero forms and leads an army against The Order. As usual, you’ll need to find and recruit 108 allies who will bear the mark of the stars. Many of these allies can join a party and fight in combat, while some stay at the castle and provide equipment or other benefits. Other characters also act as support in battle, able to heal an ally at the end of a round or provide new types of field commands.

Battles are turn based as you’d expect and pretty fun, but long time Suikoden fans will be disappointed that your party can only include four playable characters instead of six. In a game that puts heavy focus on formation and character relationships, it’s a shame to see the numbers restricted. However, had the game allowed six characters, the difficulty would have to have been increased dramatically. Even with four characters, this is a generally easy ride that should prove no resistance to hardened RPG veterans. 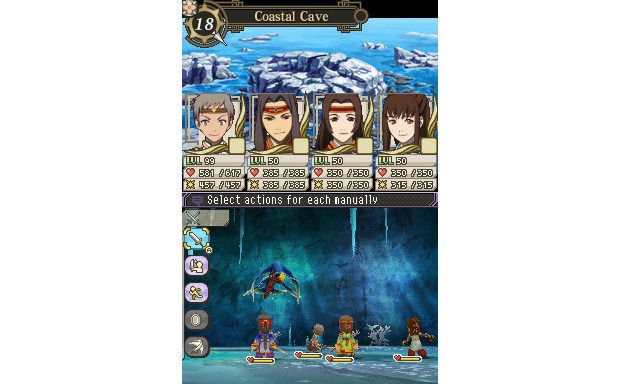 There is plenty to do in the game. As well as the beefy storyline and vast number of characters to recruit, one can also undertake a variety of extra missions which tend to yield high amounts of cash or special equipment. Some of these missions require hands-on performance, while others ask that you choose a number of characters to do it independently. In the case of the latter, the mission will be fulfilled after a set number of in-game days, and the success will depend on whether or not you chose the right people for the job.

These special missions also make use of the DS’ Wi-Fi capabilities. Later in the game, you’ll meet a character who is able to transport characters from “other worlds.” What this means is that other Tierkreis players can essentially “upload” their own characters into the public domain, to be picked up by other players and used for various tasks in their own game world. It’s a very interesting little feature that helps bring a community feel to the experience, but it’s quite badly explained in the game and will take some patience to figure everything out.

Despite the lack of significant challenge, Suikoden is still a consistently fun experience. The game constantly empowers the player, and it’s incredibly satisfying to watch your castle fill with new allies. The game’s many upbeat moments constantly make the player feel like progress is being made and encourages one to keep up the momentum. It’s a rare case of an RPG spurring its players on rather than grinding them down, and it’s to be commended. 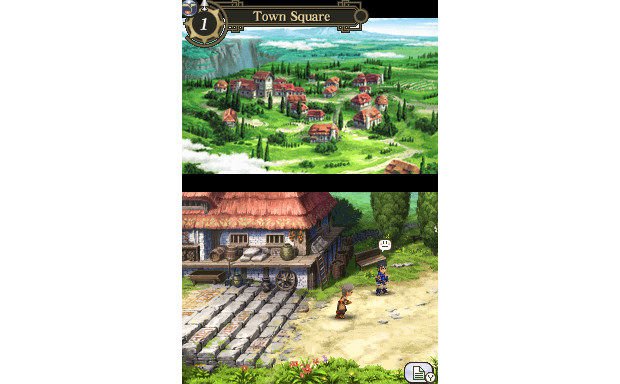 That said, the sense of progress is bogged down by a few annoyances. Most notable is the fact that the game constantly requires you to exit and enter your castle as you go out into the world. While not usually a problem, one has to walk through two quite long screens of nothing in order to get in and out of the castle, and it can get incredibly tedious. The drawn out process or entry and exit is completely unnecessary as well, and it’s confusing as to why one can’t just start inside the castle when entering from the world map.

The game can also be quite vague in its requirements. As already explained, Tierkreis does a bad job of explaining various aspects of the Wi-Fi, and a number of missions are quite poorly laid out. Sometimes in order to progress, one simply has to run into various castle rooms and hope they stumble across the next plot point. While I’m pointing out flaws, I also don’t know why the game forces you to scroll down when choosing between two dialog options. If you like the first choice, you have to scroll down and then up in order to select it. You can’t just select the first one like normal games.

Visually, Konami has chosen to eschew sprite-based graphics in favor of a fully 3D aesthetic. On the DS, this is usually a bad thing, and while Tierkreis does a good job with the polygons, the graphics look far uglier than they would have done with sprites. It’s a shame, because the characters and environments are artistically well designed. The decision to not use the top screen for anything more than pretty pictures and stats is also questionable. A map would have been very useful, especially for the castle once it gets bigger. Luckily, the music is pretty good throughout the game, which takes some of the edge off of the voice acting. 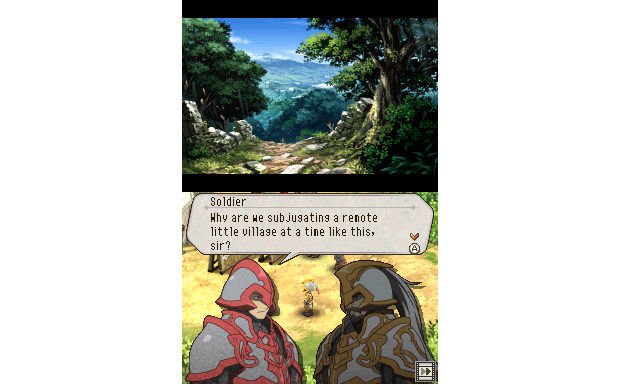 It’s also worth pointing out that, like many RPGs on the DS, Tierkreis makes only optional use of the touch screen controls. You can use the stylus to control the hero and input commands, but considering the fact that buttons are simply better for such tasks, it’s an option you probably won’t use.

The game’s frequent annoyances sometimes threaten to get in the way of a great game, but it’s undeniable that Suikoden Tierkreis is definitely great. If you’ve been feeling a little burned by the recent string of disappointing JRPGs, then Tierkreis is definitely worth picking up. It takes a little time to really get going, but so far it’s the best RPG I’ve played since Lost Odyssey, and while it may not always be true to Suikoden‘s roots, it’s a game that happily deserves to be part of the series, and has made for a wonderful DS debut.

Score: 8.5 — Great (8s are impressive efforts with a few noticeable problems holding them back. Won’t astound everyone, but worth your time and cash.)