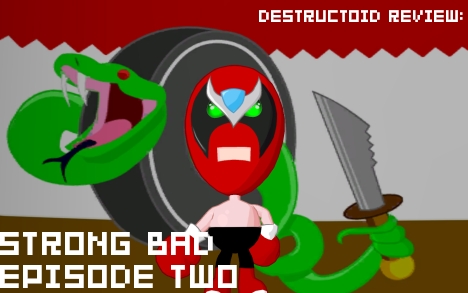 Jon Holmes and I were divided on a few key points when we reviewed Homestar Ruiner, the first episode of Strong Bad’s Cool Game for Attractive People. I thought the puzzles were obscure and unfocused, the humor got old after a little while, and the series in-jokes made for the funniest moments of the episode. Jon thought pretty much the exact opposite.

But what of Strong Badia the Free, the newest episode? Does this episode feel any different than its predecessor? Are the puzzles any better? Are you man enough to join the Homestarmy?

Since the last paragraph was full of questions, this is the part where I’m supposed to say something like “answers will be found after the jump.” But that’s trite and expected, so I won’t say that.

Then episode two came along, and had me laughing out loud even more frequently than many of the Sam and Max episodes (which I really, really love). While I’m almost positive Strong Badia the Free would be confusing at best and irritating at worst to a player unfamiliar with the Homestar universe, the plot will do wonders for anyone who can happily recognize phrases like “Homestarmy” and “Lil’ Brudder.” 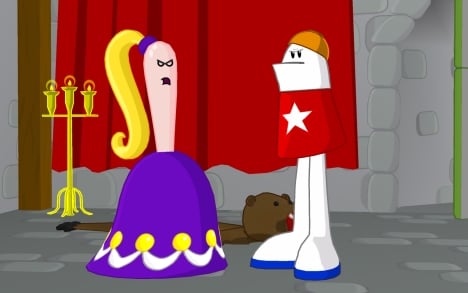 While episode one’s humor eventually got stale due to its generic plot (“Screw over Homestar”), the surprisingly epic story of Strong Badia the Free puts the characters in a brand new context that leads to much more interesting humor than just “Homestar talks weird” (though he frequently does, and it is funny). Strong Bad, revolting against The King of Town’s new email tax, decides to use Strong Badia’s army (consisting of just Strong Bad, The Cheat, and a tire) to overthrow The King in a military coup. As Strong Bad reveals his plans to the other characters, they all decide to create their own sovereign, single-citizen nations (“Pompomerania,” “Marzistar”). It’s up to Strong Bad to unite the divided nations and storm the King of Town’s castle.

This plot works, and works damn well, because it takes the familiar Homestar characters and puts them in a slightly different situation. Though I can’t imagine anyone in their right mind has ever asked, “I wonder what it’d be like if the Homestar characters declared war on each other?,” the result tends to be surprisingly funny.

Bubs, the guy who runs the concession stand, becomes a black market arms dealer. Homestar becomes a Cheney-esque drum beater urging for a pre-emptive strike against the King’s forces (which consists only of the King and the Poopsmith). Strong Sad uses legal channels to draft his own constitution and declaration of independence. Unlike Homestar Ruiner, the characters in Strong Badia the Free actually have something to do apart from just standing around, spouting catchphrases– there’s still a lot of humor to be had from their kooky personalities, but it’s all delivered in the service of the ridiculous story, and is thus way more effective as a result of it. Hell, even Homsar ends up being vitally important to Strong Bad’s campaign. 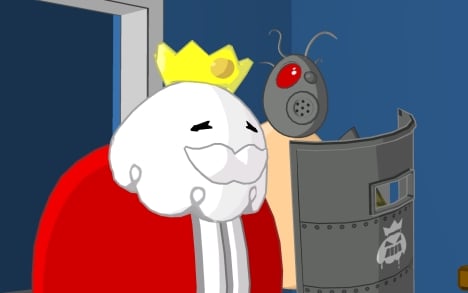 Puzzle-wise, SBCG4AP‘s second episode manages to trade one enormous flaw for another. Where Homestar Ruiner‘s lacked direction, Strong Badia‘s are much more focused: your goals are clearly stated, and the player always understands their overall goals. The new problem, however, is that all the puzzles are really, really easy. The conversational hints are too obvious, the solutions too simple, and you’ll use Strong Bad’s lighter at least three times to solve puzzles that should have been a lot more complicated than just, “set this thing on fire to destroy it.” It’s way less frustrating than the previous episode, but it’s also completely devoid of challenge. Well, until the awesomely genre-bending final puzzle, anyway (which I won’t spoil).

The new Videlectrix game, “Math Kickers, Featuring the AlgeBros,” is almost clever as hell. Almost. Ostensibly a parody of 2D brawlers like Double Dragon, the player controls a pair of brothers as they fight off ninjas using punches, kicks, and algebra. A group of ninjas will appear on screen along with a multi-variable equation: by punching and kicking ninjas on the right or left side of the screen, the constant numbers on either side of the equation will lower. If you manage to make both sides of the equation match up, the equation is solved and all the ninjas disappear.

Though the concept is really funny and the combat is decent enough (the special moves, which you can find scattered throughout the Homestar world, are pretty fun), most of the game just devolves into running into the ninjas and bashing them at random until the equation sorts itself out. Maybe I’m weird for wanting to see the brawler/math idea taken further, but it just feels too damn cool and unusual in concept to be almost entirely discarded by the actual gameplay. Still, though, it’s way better than “Snake Boxer 5.” 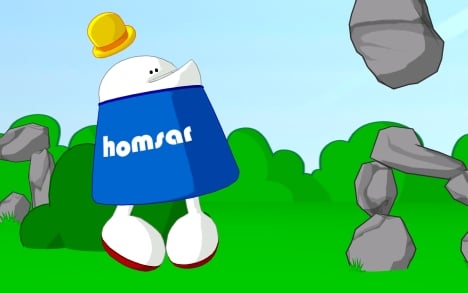 I find it difficult to affix a fair numerical score to Strong Badia the Free. On the one hand, it’s far too easy…yet on the other hand, would anyone really come to a Homestar Runner game solely for head-scratching puzzles? The game is really, really funny, the series references work great, and the plot is epic  enough (you will find out more about Homsar than you ever thought possible) that I’m honestly worried that Telltale has spoiled their most interesting episode less than halfway into the season. I dunno how they will be able to outdo Strong Badia the Free‘s story in future episodes, and it honestly kind of worries me (I previously felt this way about Chariots of the Dogs, and my concerns turned out to be justified). So long as you’re a fan of the series, you’ve got every reason to check out Strong Badia the Free. You just might find yourself wishing there was a lot more meat to the puzzles.

While the game’s parody of military-minded thinking, and of the notion of countries in general, is very well done, it feels like too large a departure from the character driven exploits of Homestar Ruiner. For instance, the first two countries that Strong Bad attempts to woo to his side are run by Pom Pom, a weird yellow man-thing that doesn’t speak in a language humans can understand, and The Cheat, a weird yellow rat-thing that also doesn’t speak in a language humans can understand. Not exactly a recipe for good comedic dialog and characterization.

The game is still funny, even when the only intelligible character on screen is Strong Bad, but these interactions are just not as interesting as the ones found in Homestar Ruiner. It’s not a problem that stays with the game, but it a problem that hits hard and hits fast, really hurting the game’s initial attempt at building momentum. 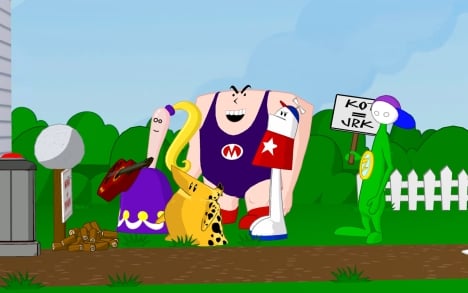 Things do pick up fairly quickly though, because as Anthony said, this episode is easier than the first. It won’t be long before Pom Pom and The Cheat join your front against the King, and you’re moving on to interactions with English speaking characters like Marzipan and Homestar. Sadly though, having two characters that you can understand only helps so much. Again, this episode always stays funny, but the interactions between the characters just aren’t as interesting.

In Homestar Ruiner, I felt like I really got to know the characters of this world for who they were, and I was surprised by how multi-dimensional they could be. In contrast, Strong Badia the Free plays out more like a school play with the Homestar Gang as the actors, all playing the parts of political leaders. You don’t get the Homestar gang that much more than you did, and instead just see them pretend to be people they aren’t. This is probably perfect for those already sick of the Homestar universe, but for someone like me who’s first introduction to this stuff happened a month ago with Homestar Ruiner, it’s kind of a bummer.

All that being said, I did enjoy this episode in terms of the comedy and the puzzles as much as the first one, and it certainly doesn’t feel like the series was getting stale. Strong Badia the Free is mostly made up of all new environments, so it in no way felt like a simple recycling of Homestar Ruiner, and while the game’s structure of “convert a country, to move to the next country” makes it inherently more predictable than Homestar Ruiner was, it’s still full of surprises. The methods one uses to get a country to join with Strong Badia are about as unconventional as one could ask for, and due to the increased focus in the game’s direction, you’ll be moving to the next zany, madcap situation much faster than you did in Homestar Ruiner. 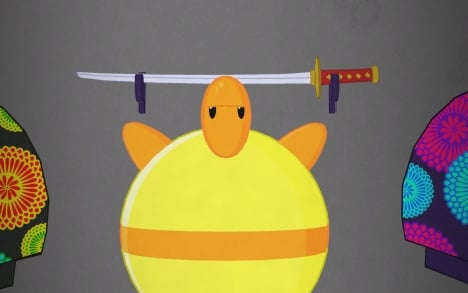 In conclusion, I’m surprised by just how different Strong Bad: Episode 1 is from Episode 2. Also worth noting is that I played Episode 1 on the Wii, fully reclined on the couch with my free hand in a bowl full of pretzels, while I played Episode 2 hunched over my PC with my hands full of nothing but carpal tunnel syndrome. This sad turn of events coupled with the fact that I had such low expectations for Episode 1, and high expectations for Episode 2, may be altering my perception of the game a little bit. With that in mind, I’m going to cut Strong Badia the Free some slack when it comes to scoring. The Strong Bad series is still one of the best modern point and click games out there, and the only one currently dishing out fresh content. With that, I give Strong Badia the Free a…

Score: 7.75 (Good/Almost Great.An impressive effort with a few noticeable problems holding it back. Won’t astound everyone, but is worth your time and cash.)