Up until recently, the Xbox 360 has had very little to offer in the way of role playing games. Eventually titles like Eternal Sonata, Blue Dragon and Lost Odyssey sort of saved the day, but tactical strategy role-playing game fans have been left holding their PS2 controller.

Atlus later chimed in to say that they had a few new titles lined up for the Xbox 360, including a couple of new strategy RPG series. In this bunch, Idea Factory’s Spectral Force series was to make its US debut with Spectral Force 3. Would this be the high-definition, new generation SRPG we’ve been waiting for? Or would it be just as generic as its name.

Hit the jump to read our review of Spectral Force 3.

You start this game as a newbie mercenary named Begina (as in “beginner”) who is suddenly thrust into the role of group leader after the untimely and painfully awkward death of their fearless leader. The dialogue and voice overs were so awkward during this death scene that I was thankful that no one else was in the room to see it. Yes, I was actually embarrassed for a videogame. That’s not to say that the voice acting in Spectral Force 3 is all bad, though it does have its low points. It’s just sad that this important opening this scene did not come together well, and it’s unfortunate that the game kicks off on such a low note.

Thankfully things start to pick up in actual game play. I should say that Spectral Force 3 is a tactical strategy RPG in the plainest sense, but something about the pacing and level design makes it sort of addictive. Engagements are almost bite- sized. You’ll eventually be able to pick your battles, jump in, fight, collect your reward money, and then save. Rinse, lather, repeat. 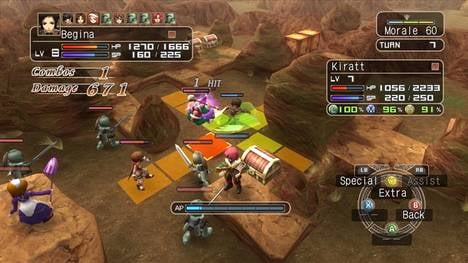 Just like you’d expect, you move your small army across small maps over grids, and then take your turn in battle. If you’ve played any of the countless other strategy RPGs out there, you’ll know what to expect. Other than the scattered super-powered earth magic spots on the map — the Geomancy mechanic — there’s absolutely nothing fresh or new about Spectral Force 3’s game play. In fact, the only thing different I felt during game play was the weight of my Xbox 360 wireless controller.

Fans of the genre may be fine with the standard game play formula that SF3 provides, but they may not be with the storyline… or lack thereof. Although a bit clichéd, it first seemed like a story about new mercenary suddenly taking charge of a group could get interesting. Unfortunately the story goes nowhere. You’re simply a group that is looking for more mercenary work. At first, your team bails on you after your leader dies, and your left with only the helpless healer Diaz as a teammate. You’ll drag him around for a few levels and eventually recruit more fighters. As you rebuild, you might think that an overarching end goal would develop, but it does not. I found myself playing through battles, never really caring about the reasons or story outcome, just as long as I won.

In between story-based “missions,” most of the game play revolves around a menu command called “Find Work.” You’ll select that option, select a country, and then select a job. Seriously, that’s Spectral Force 3 in a nutshell. These jobs have you working to aid various warring countries, and your victory will rewarded with money. Of course, the jobs that pay more are more difficult, so you’ll have to play through the lower paying ones a few times to level up to a point where the higher paying jobs are doable. 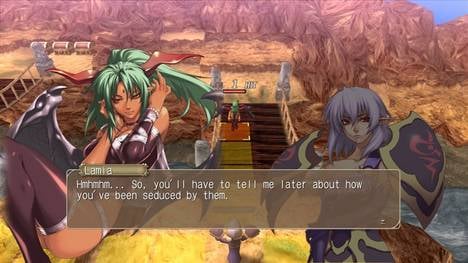 In the end, it felt like the only real goal was to make my squad more powerful and better equipped, and the story seemed like it was tacked on as an afterthought. You’ll be notified about the state of warring countries via a map with flashing colored territories, but the story does such a bad job of drawing you in that I skipped past these screens as fast as I could. Even now, I still don’t understand why I was being notified and how these countries related to the main missions.

Spectral Force 3 also failed to engage visually. While graphical flair may be less important in a strategy RPG title, I couldn’t help but think this looked like a game on the one of the previous generation of consoles. Think of a higher-resolution Gamecube title and you’ll be on the right page. The anime-style drawn character art was mostly nice, though a bit generic. The actual game map screens were about as bland as they come, and the in-game characters looked sad and ugly compared to their drawn versions. The sound and music were equally disappointing. Some sound effects were disproportionally louder than the music, and stuck out like sore thumb. The level controls in the options helped a bit, but never quite fixed things. The in-game tunes ranged from generic to terrible, with the worst sounding like a poor rip-off of the “Beverly Hills 90210” television theme song.

It’s not that Spectral Force 3 is a bad game. The game play is entertaining enough, and battles and missions provide callenges that keep you coming back. It’s just that the lackluster presentation and boring story really hurt the overall package. In the end, you’d really have to love strategy role-playing games to commit to this. Otherwise, there are better options in this genre out there for the PlayStation 2 and the portables.

Score – 6.0  (Decent. Slightly above average, maybe a little niche. But we wouldn’t recommend it to everybody.)