Nippon Ichi continues to provide us with a bevy of tactical RPGs for the PlayStation 2. Each game in their lineup, which includes favorites such as Disgaea, La Pucelle: Tactics, and Phantom Brave, provides a different lineup. Each game, while similar in art style and feeling, focused on a different mechanic, giving players a new experience each time they picked up one of their titles. La Pucelle: Tactics, for example, focused on “purification” of enemies and terrain in order to level up and gain new allies.

Soul Nomad and the World Eaters follows in the previous games’ footsteps, and provides us with combat on an epic level. No longer are characters fighting with single units, but now the combat takes place using squads, akin to Advance Wars. The game’s strategy lies within the ability to create effectives squads that will work on their own, and as part of a larger army.

Sure, the PS2 is “last-gen,” but that doesn’t mean you can’t have fun with the system. Let’s take a look at title, and see how it stacks up against everything else vying for your money.

In a depature from Nippon Ichi games of the past, in Soul Nomad, you are the nameless hero of your creation. The elder of your village intrusts you and your childhood friend, Danette, to go out and destroy the World Eaters (which are dormant at the moment) in order to make sure the world is safe. She gives you an ancient sword, which has the soul of Gig trapped in it. See, the thing is, Gig is the one who controlled the World Eaters some 200 years ago.

Once you hold the sword, Gig inhabits your body — the two souls are now permanantly linked. This is why your character is nameless: Gig repeatedly offers you his power to defeat insurmountable enemies, but at the cost of him taking over your body. Obviously, this wouldn’t be much of a game if you just let Gig take over your body (although you certainly do have that option). So, you progress through the world, building up an army of your own with which to fight. Your enemies are everywhere, as there are several factions looking to protect, destroy, or use the World Eaters.

At the beginning of the game, you’ve got a select few blocks where you can lay out the people in your party into various squads. Gig also acts as a shop for buying items and new recruits. The neat thing is that unlike in games like Final Fantasy Tactics, where your recruits start out at level one, you can actually buy your recruits up to the highest level of someone currently in your army. Training your army isn’t a matter of wandering around the map, looking for random battles. For the most part, the story mode itself takes care of the leveling up that’s needed. It gives the option of leveling up the individual terrain blocks that each squad resides upon.

Like I mentioned earlier, this game really relies on your ability to maximize the squad system. Each terrain offers different layouts for units and different benefits, and which troops are selected (including deciding who the leader of a unit is) help decide your effectiveness in battle. You’ll go through plenty of trial and error trying to get your soldiers into a good fighting position. Each character has a different move for when they’re in front, middle, and back, so you really must consider everyone’s strengths and weaknesses. 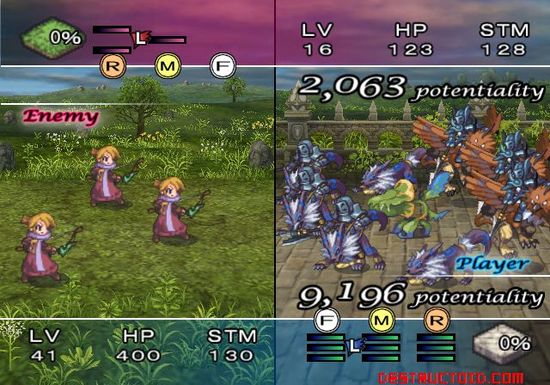 Since the battles are squad-based, combat takes place in a format more like Advance Wars, where you’ll fight squad vs. squad. Once you pit them against each other, one side launches its attacks, followed by the return fire from the other group, provided they aren’t eliminated. You can’t choose which units in particular they attack, but there are some general rules you’ll figure out as you play. Terrain will add certain bonuses, hinder, or flat out restrict your movement, so you’ll have to pick your strategy a little more carefully than just ganging up on an opponent.

One of the other nice things the game throws at you is the ability to pick fights with NPCs using one of the items available at Gig’s shop. You can go into the town and pick a fight with the shopkeeper, for example. If you win, you’ll get a bunch of gold. If not, he’ll just mock you and your abilities. The items available in Gig’s shop have different effects in and out of combat, so experimenting with all of them adds some depth to the game.

By and far, my favorite part about this game is the localization and the dub. Much like Persona 3, every character comes across as natural and has their own unique personality as they talk. The selection for the voice actors was key in this. Gig, for example, speaks in a half-yelling tone, completely full of himself and he hates most of the party. He’ll angrily call your friend, Danette, a “retarded bovine.” The voice actors put their all into this, and created a wonderful feeling for the game — one that’s fundamentally different from Persona 3, though. Most Nippon Ichi games have a relatively light mood, and the voice acting always comes up great. With Soul Nomad, though, it goes a step further thanks to all of the characters’ personalities. My only knock against it is that the dialogue doesn’t auto-advance, forcing the player to anticipate when to press the button to keep the dialogue flowing.

The art style is the same stock we’ve seen from Nippon Ichi over the past several years. The characters all move and act in the same way as before. It’s not surprising as one of the hallmarks of a Nippon Ichi title, but it gets a little old if you’ve played several of their games already. The music, too, is much like the other Nippon Ichi titles, which is to say they’re lighthearted fantasy orchestral music. It fits the game alright, but it could have been better if it deviated from past soundtracks more. 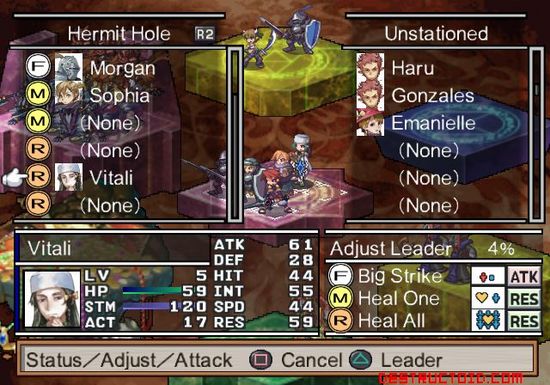 There are some RPGs that are must-owns because they manage to step above and beyond the story arc of being a hero. Persona 3 made the mundane day-to-day activities a vital part of the game, while Final Fantasy Tactics provided a convoluted (but enjoyable) story of intrigue that’s far separated from the traditional fantasy realm. Soul Nomad and the World Eaters provides a new mindset for fighting through the game, and with a fantastic localization and dubbing, the game is a great time-sink for the RPG (or Advance Wars) fan. The game’s flaws lie mostly within aesthetic choices made by Nippon Ichi, and are far from gamebreaking. Be sure to pick this one up.