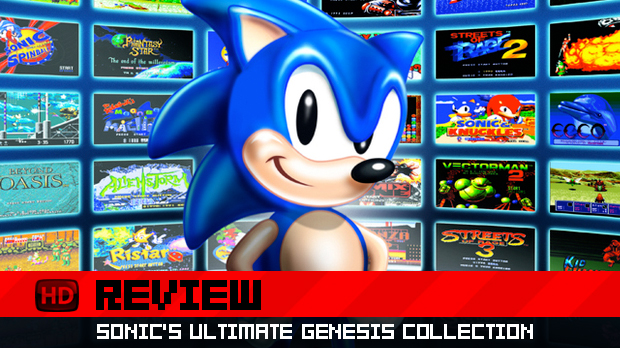 Sega has an amazing legacy and a library of fantastic, cherished franchises that remain among the most memorable experiences in gaming history. Then we get something like Shadow the Hedgehog, and everything turns to brittle rust and dried, blackened blood.

Thankfully, Sega is not above milking its history and reminding us of the good old days with endless compilation discs, the latest of which is Sonic’s Ultimate Genesis Collection. With over forty titles from the days when you could be proud to be a Sega fan, this is arguably the most comprehensive collection yet.

Is it worth your cash, or has Sega milked nostalgia’s teet so hard that only dust is dribbling out of its red, cracked flesh? Join Dale North and myself as we review Sonic’s Ultimate Genesis Collection. Make sure to check out our HD video review too, where we invite a very special guest to share his thoughts.

Sonic’s Ultimate Genesis Collection compiles over forty titles of the Genesis/Mega Drive’s long and healthy career, providing a mixture of famous classics and a few obscure gems. One of the most notable aspects of this collection is the fact that Sega has used a couple of games that it’s never exploited on a disc before, such as the terrific Zelda-lite adventure game Beyond Oasis. Even Sonic the Hedgehog 3 is rarely churned out for these nostalgia fests, but it’s present this time around, which makes the collection feel that much more complete.

As has become standard with the Sega and Backbone ports, these games have been emulated without any change whatsoever, right down to any bugs and glitches that were present in the original releases. As is also the norm, you can “upgrade” the visuals to include widescreen, and select “smoothing” to make the images less pixelated. Many gamers aren’t fans of this, but I tend to personally like the option and routinely upgrade everything I play.

As well as the Genesis titles, players can also unlock a selection of Master System and arcade games through the performance of various in-game tasks. Quite why we need two versions of Altered Beast when one is bad enough confounds me, but if you’re supremely masochistic, it’s there for completion’s sake. Many of the unlockable games are fairly rubbish, but tend to fall under the “interesting” category, justifying their existence by being just curious enough to warrant a mention, even if they’re only played once and swiftly forgotten.

The various extra tasks add a little more incentive to try games and earn Achievements/Trophies, although they tend to either be incredibly asinine and pointless or so difficult as to not be worth the bother. Eating 200 fish in Echo II is just stupid, whereas getting to the fifth level in Fatal Labyrinth simply isn’t worth the pain. That said, some players will doubtless kill themselves trying to get some of the harder ones. By all means attempt to play Super Thunder Blade for more than three seconds and get the required high score … nobody will respect you for such a horrible act of self-deprecation, but you might be proud of yourself for a minute.

One neat feature to SUGN is the fact that you can rate the games and view them in order of your personal favorites. This makes finding the most played titles a lot easier, and allows you to bury Echo the Dolphin right at the bottom where it belongs. Even lower, I dare argue, than Flicky. I do wish the menu presentation didn’t look so cheap and muted, but it does the job and finding the required game is easy enough. I would have also loved more than just the box art and a photo of each game’s cartridge in the “museum” section. Actually having access to reproduced manuals and old advertisements would have been amazing and could have really pushed this product over the edge. The few bones we’re tossed are appreciated, but I’d have loved even more.

Reviewing a title like this is difficult, since you don’t really know how to recommend a compilation of old games that most people wouldn’t want to spend money on these days. That said, there is an incredible amount of content on the disc. Extras aside, the Phantasy Star and Shining Force games alone will provide you with more gameplay than you’ll see in most full-priced retail releases, and some of the classics such as Streets of Rage and Sonic 3D Blast are full of endless replay value. I was joking about Sonic 3D Blast.

At the end of the day, it all comes down to how much of a Sega nerd you are. Those who grew up with a Genesis in the house and remember a world before Shadow the Hedgehog really should do themselves a favor and pick this compilation up, as it will provide them with hours upon hours of entertainment. Even the rubbish games are worth playing for the comedy value, and there are enough high quality games on the disc to make up for the questionable inclusions. Having so many Genesis games conveniently stored on one disc and ready to play in High Definition is perfect for children of the nineties such as myself, but younger gamers will likely be offended by the lack of ragdoll physics and bump mapping.

They just don’t understand the power of Blast Processing.

As a “Sega kid” and a product of the 1980s, I know that I’m precisely the target audience for these seemingly endless releases of game compilation discs. It’s obvious that the sole intent of these releases are to prey on my love of classic gaming and take my money. And I was fine with that for awhile. Now, looking at my game collection, I see a shelf full of collections from various companies that I never play. And now Sega has a new one? Great.

But now that I’ve spent time with Sonic’s Ultimate Genesis Collection, I don’t feel so bad for giving in and adding this one to my collection. In fact, I’d go as far as saying that this is Sega’s best (and best-looking) games collection yet.

Before I get into that, let me take a moment to call out Sega on the name of this collection. First off, it’s not that “ultimate.” At about $30 for 40 or more games, it’s certainly a great value. But I think they should have saved the moniker for that eventual (hopefully) mega-disc that contains everything 16-bit and Sega. Or at least one where they leave Gain Ground off. The other beef that I had is the inclusion of Sonic’s name. The Sonic I know and love would put all of the games starring himself in something called Sonic’s Ultimate Genesis Collection. Instead, you only get six or so Sonic games in this collection. Perhaps they’re saving those other ones for the inevitable Sonic collection on this generation’s hardware.

As said before, the value here is fantastic. You get 40 Sega Genesis titles that cover just about all the bases, as well as nine more unlockable titles coming from either the Sega Master System or the Arcade. It lacks a good one-on-one fighting game, but everything else is here. There’s a veritable pile of role-playing treasures here, though there’s a couple of duds, too: let’s just say that Fatal Labyrinth did not age well. Fans of side-scrolling beat-’em-ups will definitely be pleased as over a dozen great titles are included, including more Golden Axe than you can shake an axe at. Platforming fans have nothing to complain about either: sorry Sonic, but in my mind Dynamite Headdy and Ristar have shown you up in your own collection.

All of the games look better than ever on your high-definition set as they’ve been scaled up to 720p; that’s quite a jump from that old RF connector you had on your Genesis back in the day. Colors pop and details shine; I found myself noticing new details on games I’ve played for years now. Darkly colored games like Vectorman 2 have so much more noticeable detail now.

While the games themselves are fine, I feel that the overall presentation of the collection lacks a bit of polish. After viewing your now typical flying screens montage opening movie, I was surprised to hear the select menu music coming out of only one speaker, the front left one. In contrast, the menu sound effects considerably louder, and in stereo. Sound oversights seem to move into bugs, probably in the emulation code. I found a few instances of sound breaking up or distorting in some games. Remember the first boss in Sonic 3? The bombing airship? The sound effects crackled and distorted the whole battle.

The lack of polish continues into the unlockable developer interviews. The videos seem pretty low-res and grainy. Also, the subtitling on Japanese speakers is so poorly timed that it seems like they could have just omitted the video and featured text and screenshots for the interviews instead. Maybe they could have saved room to include Sonic CD instead.

So how do you recommend a games collection? I think you look at the sum of its parts. I personally put 50+ hours playtime into this collection, and I can say that I really enjoyed playing my favorites over again. I missed these games. I am proud to say that I demolished the insanely challenging Dr. Robotnik’s Mean Bean Machine for the first time, too. I was also going to complete Fatal Labyrinth just to say that I did, but I couldn’t stomach it. Sorry.

In all, it was great to be able to flip through a menu and boot up classics that I’ve loved for years. It sounds cheesy, but this collection really brought me back. It immersed me in those 16-bit days where I’d spend an afternoon of playing a game for hours, then rip the cartridge out, put another one in, and go at it again into the night. The advantage here is high-definition graphics and the lack of cartridge blowing. And at $30, this collection is probably cheaper than that stack of cartridges, even now.