I’d been looking forward to this game for a long time, ever since I played it at the Tokyo Game Show and found myself having quite a bit of fun with it. Later hands-on sessions seemed to confirm that, while by no means perfect, Sonic Unleashed was definitely a fun little videogame. However, it was under closer scrutiny that the cracks started to show, and now it’s become one of the most bipolar games I’ve ever had to play.

Now the time of judgement is at hand, both Sonic and his Werehog counterpart having been rigorously put through their paces. What is the final verdict? Read on to find out … 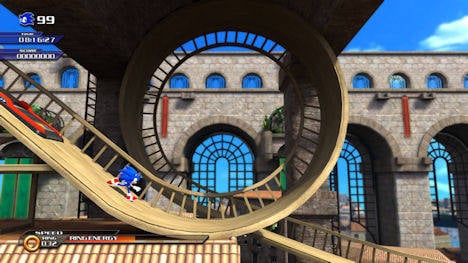 As with all new Sonic games, this latest title attempts to adhere to a plot, although unlike Sonic 2006, this one actually doesn’t make me want to eat my own fists in confused rage.

The game begins with an astoundingly beautiful opening cinematic in which Sonic and Dr. Eggman/Robotnik are busy having their final showdown. As Sonic corners Eggman and is about to bring him to justice, it turns out that the whole thing was a scam by the good doctor. He traps Sonic, corrupts the Chaos Emeralds, turns him into a werewolf and wakes up yet another Sonic Team-created Final Fantasy monster, The Dark Gaia. 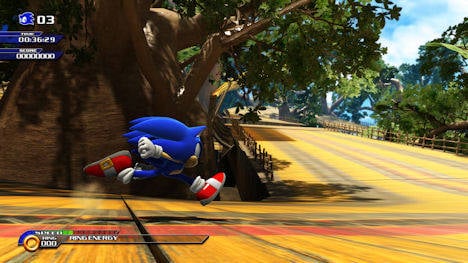 It’s as absurd as any other recent Sonic plot, but the difference with Unleashed is that it never takes itself too seriously, using some childish slapstick and a more cartoon-like approach overall. While not exactly engaging, it is mostly inoffensive, save for yet another sidekick in Chip, whose singular gimmick of perpetual hunger is almost as grating as his voice.

Gameplay is roughly split in two halves, with Sonic the Hedgehog performing speed runs through daylight stages, and Sonic the Werehog tackling Gaia monsters in a platform brawler style at night. There are also other gameplay modes and some ridiculous faux RPG stuff, but we’ll get to that in a moment.

The speed runs are what you will be familiar with if you’ve played most of the post-Genesis console games. The difference here is that these ones aren’t complete rubbish. Seamlessly switching from a 3D to a 2.5D perspective, quite a few of these daylight stages are incredible. Sonic will smash through enemies, jump from rail to rail, home in on airborne enemies to cross chasms, and like never before, it all actually works. Well, most of the time. 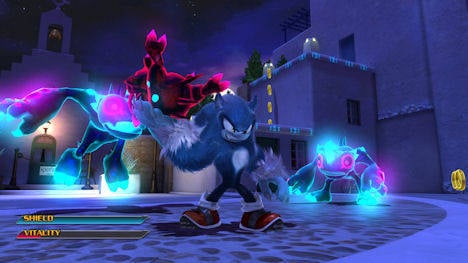 There are a few poor design choices that hold the speed stages back. For instance, a vast majority of the Chu-Nan stage is terrible, with dodgy homing attack sections and a huge amount of trial-and-error gameplay. Holaska is not much better, with an entire section where Sonic must gather rings while speed boosting across water to avoid drowning. Considering how difficult it is to gather the rings with such a fast, hard-to-steer hedgehog, you’ll be swallowing a lot of water.

Worst of all are Sonic Team’s attempts at completely 2.5D stages. Spagonia’s Rooftop Run Act II, for example, is probably the most broken bit of “gameplay” I have played all year, if not ever. The controls were not designed for intricate platforming, and the piss-poor design of the stage doesn’t help matters. In fact, just after checkpoints in this stage, you are given an extra life that appears every time you restart. The very fact that Sonic Team had to put that life in indicates that they knew how broken the stage was. Covering your own ass like that doesn’t make up for the fact that the whole level is shattered in terms of design. 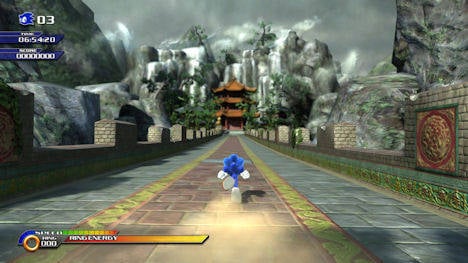 Yet the game is able to make up for itself with such stages at Rooftop Run Act I, which is, to be honest, beyond breathtaking. There are moments in Sonic Unleashed where you feel absolutely magnificent, and as Sonic hits 300 in-game miles-per-hour, blasting through stages, leaping from spring to spring and running along walls, you’ll find it hard to stay mad at the game. Until, of course, yet another broken section rears its ugly head.

Such additions as the side-step, in which Sonic can zip from left to right while maintaining his speed, and the new ability to “drift” and screech around bends, add much to the gameplay and make for some incredibly fun moments. The aforementioned Speed Boost, in which Sonic can use “Ring Energy” to increase his speed and break through obstacles, is particularly empowering. It’s just a shame that the fun gives way to frustration far too much. The inspired elements make one sad, knowing that the entire game fails to be so thrilling when it so easily could have been.

The same can be said for the Werehog sections, which are also roughly split between enjoyment and hatred. At its core, the nighttime stages make for some simple but pleasant brawling, with Sonic able to pull off some great moves — including the Sho-Hog-Ken uppercut. However, the Prince of Persia-style environmental acrobatics simply don’t work. The controls aren’t responsive enough for these platforming sections, and you’ll often find yourself falling to your death thanks to sluggish movement, poor camera angles, or both. If Sonic Team wanted to rip off PoP, it should have also ripped off the intuitive, fluid controls. 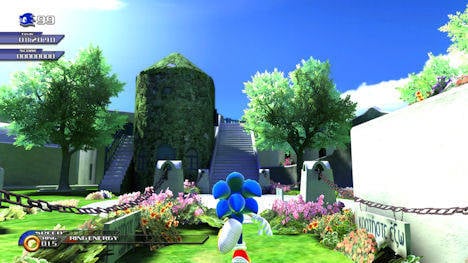 When it’s not trying to be a platformer, however, Sonic Unleashed works pretty well as a brawler. The Werehog has access to some powerful and impressive moves, and also has an “Unleash” meter which, when filled, gives him a little extra edge in battle. It’s certainly not as much fun as something like Devil May Cry, but it’s fundamentally solid action.

I can at least say that Sonic Unleashed is easily one of the best-looking videogames I have seen this generation. The speed stages are graphically sublime, and the new Hedgehog Engine does a magnificent job of capturing an intense sense of speed while showing off some gorgeous environments. The Werehog stages are similarly beautiful, with the Dark Gaia creatures rendered in neon greens and pinks that really make them stand out.

But now we go from good right back to bad. Doing little to help the experience is a reliance on meaningless collect-a-thons and needless hub worlds that seem to exist solely to pad out the game. There is no need to have Sonic wandering around a town with NPCs that have nothing important to say. Extra minigames such as a rather dire quick time event airplane ride provide a change of pace, but rarely do anything to be appreciated. This kind of nonsense points to Sonic Team’s desire to create some sort of Final Fantasy-style RPG. The studio needs to learn that forcing it into a Sonic game never works. Perhaps Sega should let these guys make their precious RPG to get it out of their system. 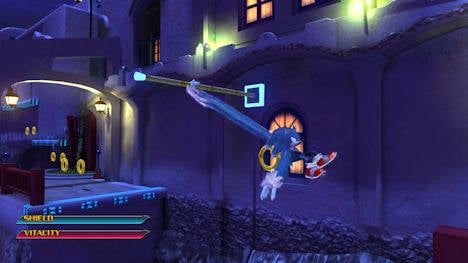 Talking of RPGs, you can “level up” both Sonic and his Werehog alter ego, applying collected experience points to various attributes, making Sonic faster, or raising a variety of Werehog stats. You can also unlock new combo attacks. Later in the game, you can also see a little hint of Zelda or Metroid, as Sonic gets access to new abilities that he can take to previous stages and access previously unreachable areas. While not exactly deep, these elements do add a little extra value to the whole package.

As a self-confessed Sonic loyalist, I like to pay special attention to the music, since the old 16-bit games had some of the best soundtracks of all time. While never quite reaching those heights, the music of Sonic Unleashed is rather catchy in places. The camp ’50s detective tune that plays as the Werehog fights is questionable and repetitive, but the speed stages have some highly memorable tunes. Amazingly, the voice acting isn’t completely brutal, either. 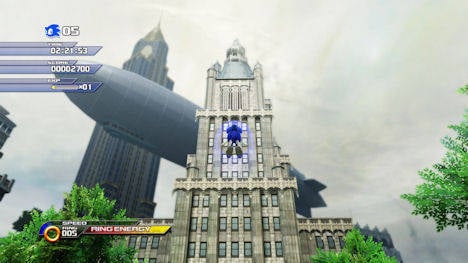 Sonic Unleashed is a very difficult game to rate. I have never played a game that is both so much fun, yet so broken and infuriating. When the game works, it really really works, but when it fails, it fails spectacularly.

All Sonic Team needed to do was to maintain the sheer fun and thrill that makes up roughly 40% of the experience and we’d be looking at a must-have title, and a score verging on a ten. As it stands, silly mistakes and ignorant design choices have trashed this game’s hopes of being anything more than a decent rental at best. By all means, play this game just to experience the high points, as they are worth experiencing. Just be careful about dropping full price for a game that has screwed itself over so badly. 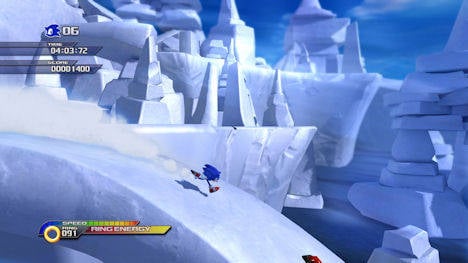 It’s like Sega baked a delicious chocolate cake, but mixed a bag of nails into it.

Score: 6.5 (6s may be slightly above average or simply inoffensive. Fans of the genre should enjoy them a bit, but a fair few will be left unfulfilled.)