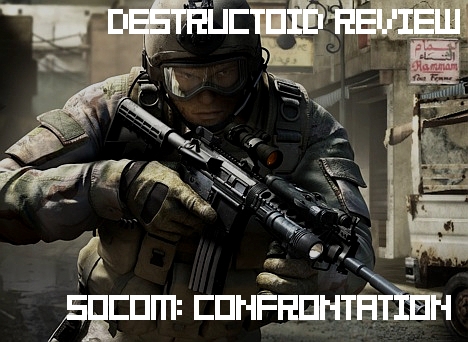 I like it when a small amount of bullets kill an enemy. Any game that markets itself as realistic must have this essential property. I’m often surprised that the majority of games don’t do this. Take Far Cry 2 for example. The game is built around the realistic portrayals and features some pretty lifelike things, including its landscape, gun degradation, and inherent violence of civil conflict. But why in the hell does it take 14 bullets to kill a dude in a wife beater?

SOCOM: Confrontation gets a few things right. One of the big sticking points for me is that your bullets negatively affect enemy players in a quick manner. You don’t need to worry about shields, regenerating health, or Kevlar wife beaters. It’s practically a blessing to see this in action.

But, Confrontation isn’t without its faults. To keep the bullet theme running a bit long, it has this particularly nasty habit of shooting itself in the foot. But how bad is the injury? Is it merely a flesh wound or is it something that even boiled, spiced wine can’t fix?

SOCOM: Confrontation is Slant Six’s first foray into the SOCOM universe. The series is known for its grit, realistic play, and bevy of multiplayer options. In this regard, the game doesn’t fail its fans. There is a ton of customization, strategy, quick kills, and options of play. But, how does one celebrate or enjoy these great aspects when the essential component, the network, is crippled by errors and latency? Therein lies the problem with SOCOM: Confrontation.

If you theoretically go out and buy this game today, you’ll immediately be greeted with two rather large patches. These patches were created specifically to address the plethora of network issues that Confrontation has experienced and is still experiencing today. The ape in the room (latency) is still looming large and casting its shadow over the vast majority of ranked matches. At the same time, the latency is manic in the majority of private rooms. Occasionally, you’ll enter into a decent room where you’ll be able to travel around and shoot, as any player would expect. These are the times when the game shines. But when the game is lagging as it usually does, it affects every facet of play – movement, combat, and communication. In addition to latency, you’ll also encounter odd bugs, crashes, server errors, timeouts, and connectivity issues. At this stage of release, this is simply unacceptable for a game that lacks a single player component. There is literally nothing to do but search aimlessly for a few matches that won’t give you problems.

Outside of the network, one of the nastier aspects is the control scheme. Seemingly simple actions like talking, crouching, and weapon selection have multiple inputs attached to the button. It also features practically zero intuitiveness in terms of button mapping. There were several occasions within the first few hours of play that I found myself opening up the manual just to find out how to lay down or to switch to an alternative method of fire. It is a steep learning curve that will often have you fumbling for grenades and wishing you had one of those Tech Tree RTS posters to guide your fingers. There are alternate methods and mapping options available, but it all feels bad. There are simply more commands than buttons.

In addition to buttons, the power of the SIXAXIS is harnessed. Moving your controller from right to left to up effects the way your character looks out from corners and from behind objects that obscure his vision. Where this is typically a sore point for most PlayStation 3 games, you’ll be pleased to know that it is subtle and typically doesn’t get in the way of normal play. Even better, it can be useful on the urban maps.

One of the brightest features is the ability to customize practically everything on your character. His voice, scars, armor, hats, weapons, face, and camouflage are editable and ready to go at your slightest whim. The ticky-tacky stuff like voice and scars are merely for your own entertainment. It’s highly unlikely that opponents or even teammates will notice that wicked scar you just put on your dude. But the choices of weapons, armor, and sidearm are vital to the play experience and carry real weight. Weapons range from standard fare rifles all the way to submachine guns, shotguns, and heavy machine guns. The armor goes from light to heavy, and the sidearms range from pistols to optional equipment like frag grenades and claymores. The primary weapons operate much like you would envision, but the optional sights and attachments give you a ton of different tactical opportunities to explore. The armor is a nice addition, but be weary, being a bullet hog in heavy armor will substantially slow down your character’s speed.

There are several different modes of play available that the majority of shooter fans will instantly recognize. Standard deathmatch, control point hunting, escorting, extracting and bombing are available. With the exclusion of vehicles this go around, it has become exceedingly more difficult to rule a match on your own and win one for the team. All of these modes and the given maps are team efforts and will require you to communicate and strategize. Luckily, talking on PlayStation Network got a lot easier. The Bluetooth headset that comes with the game is a substantial peripheral that exceeds every wireless headset available on the market. It even comes with a nifty cable that instantly syncs it to the console so you don’t have to fumble around with wireless codes. The modes and headset are excellent complements.

The majority of the maps come from previous SOCOM games, so they should feel very familiar to veterans of the series. They vary in size according to match limitations and offer a massive amount of different pathways and hiding areas, thus increasing the need for communication, patience and strategy. Every corner is a threat and every time you decide to run out in the open, one of the faithful will pop you in the jaw with ease.

Despite the recycled maps, it’s easy to come away impressed with what Slant Six has done. The majority of simulation shooters have a tendency to become predictable in terms of movement and choke points. While Confrontation will begin to seem familiar after several sessions, these alternate corners and pathways will always offer an additional and unpredictable threat.

Of course, threats would be nothing without a way to dispatch them. The only problem is getting to the enemy. Confrontation is a fairly slow game. Instead of running (which you can do now), it is always advisable to move at a snail’s pace with an idea of what you want to do or hold down. The targeting reticule expands and contracts based on your movement and rate of fire, which reinforces a notion of patience and camping. If you’re one of those shoot first, think about it later kind of guys, you’ll find an unrewarding experience. The majority of ranked games only consist of one spawn and you’re done for the entirety of the round.

The weapons in the game react wonderfully (when not under oppressive latency) to your button presses. The evaluation of the gun’s criteria (accuracy, etc.) is exceedingly relevant. While you may be able to pop off the M-60 shot from across the map, it is definitely advisable to grab a sniper or other long distance rifle. If your aim is true, and you’re not moving, you’ll hit and kill the enemy every single time. The same thing applies to the explosives in the game, although you can certainly argue that SOCOM’s slower pace only inhibits the ability to get away from the stealthy grenade throw.

Visually, the game really suffers. Character models suffice at a distance, but when close, you can see that this game lacks that next generation shine. I am also disappointed by the amount of recycled objects and the lack of overall detail present. Normally, I would take less-than-stellar graphics as an excuse for quicker loading and better networking, but that obviously isn’t the issue. The sound does suffice, though, especially the theme music. Sure, you can hear people walking around and shooting from all directions in glorious 5.1, but hard electric music always gets my blood pumping.

In addition to ranked matches, players can create their own competitive rooms and set their own rules. This would be even better if getting into a game wasn’t such an ordeal. Menus are reminiscent of previous generation multiplayer games. First you have to choose that you want to play online (and where else would you go in Confrontation?), pick a server (that isn’t full, good luck with that), then pick a room. After finding a room that isn’t packed and loading into an ancient lobby, you’ll have to wait for the next game to pick you up. After another loading screen, you finally get to play. Unfortunately, it will probably be a latency-ridden room. Private matches are quite different, but manic in terms connectivity issues. The host’s connection needs to be fairly beefy to make the game playable. What makes private matches appealing is the ability of the host to set his own rules, including infinite respawns which is a refresher if you stare at your dead body on a frequent basis.

The big problem with SOCOM: Confrontation is not its gameplay. The guns, sound, level design, and strategy are all solid elements that, under typical circumstances, would put this game a step above most online shooters. But Confrontation isn’t typical in regards to its network performance. The latency, disconnects, freezing, and generally poor structure cripples the game’s ability to deliver its characteristic style of play. After more than a month, the game is still unfriendly and hard to play as a result. Only huge fans of this style of shooter should mess with this title right now.