I can’t convey to you how bad I wanted a Neo Geo console back in the day. Unfortunately, the price always held me back. I remember one particularly bad time where I traveled quite a distance to finally get one, only to hover at this location for hours, looking longingly at the box and never fully committing.

In 2008, these games of the early 1990s don’t seem to have the $600 appeal that they did back then. But there’s no denying that the console, and more importantly, the arcade system (MVS for you SNK geeks), saw some great videogames.

In the long run, I probably saved a bunch of money by pumping quarters into those red-topped Neo Geo arcade machines. Sure, I played a lot of Samurai Showdown back in the day. But I’m sure I didn’t drop $600 worth of quarters.

SNK Playmore takes us back to those days with the release of their SNK Arcade Classics: Vol. 1 for PSP and PS2. Do these games stand the test of time? Are they still worth your quarters?

Hit the jump to read our full review.

SNK Arcade Classics: Vol. 1 contains 16 arcade hits from your beloved arcade crawling pasts. Given SNK’s rich fighting game history, the original versions of Art of Fighting, Samurai Showdown, Fatal Fury, King of Fighters ’94, Burning Fight, King of the Monsters, and World Heroes are included. But it’s not just fighting; classic platformers like Metal Slug, Magician Lord, and the awesome Top Hunter join in for some variety. Sporting is represented with the unintentionally hilarious Neo Turf Masters, the challenging Super Sidekicks 3, and Baseball Stars 2. The super-Japanese Sengoku, difficult Shock Troopers, and shooter Last Resort round out this full collection. The line-up is exactly the same for the PSP and PS2 versions.

All of these titles are presented in their arcade form, all set on “free play.” It only took me a couple of “continues” to realize how much money I’m saving by owning these titles, especially seeing as SNK likes to make their games quite difficult. These games (except one, World Heroes) are presented in a menu that lets you scroll through and pick your pleasure. As you play through each game and accomplish some preset goals, you’ll unlock options in other games in the collection. It was kind of weird having to beat Top Hunter on “easy” to unlock Mr. Big’s move list in Art of Fighting. But this does entice you to get your feet wet in other titles that you might not normally take an interest in. Think of these goals as “Achievements” that you actually get something for. Unlockables include move lists, art, movies, and even the game World Heroes. I guess SNK wanted you to work for that one. 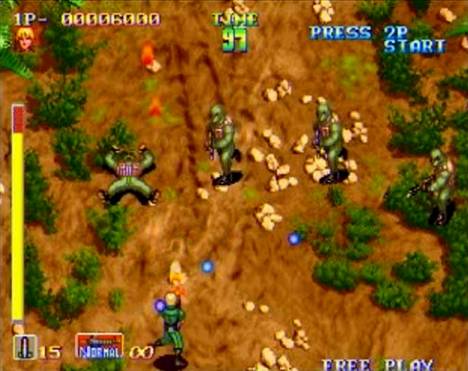 On both the PSP and PS2, all of these arcade games look exactly as you’d expect them to: old. But they’ve held up well over the years. On the PSP, the emulation doesn’t fill the entire screen by default, but options are provided if you should wish to stretch them out a bit. Aside from this, none of the games feature any visual enhancements; they look just like they did back in the early 1990s.

I’m not sure if it is the emulation or the original programming at fault, but game controls vary from fine to clunky. You’ll have absolutely no problem with the less button-intensive games like Neo Turf Masters or Baseball Stars 2. But some of the controls in fighting titles like King of Fighters ’94 or Art of Fighting seem a bit clunky, and maybe a touch worse on the PSP than the PS2. Titles like the platformer Sengoku and Burning Fight seem fairly bad to me, but even at their worst they’re not unplayable. In the worst cases, an up-forward jump ends up being just an up-jump. 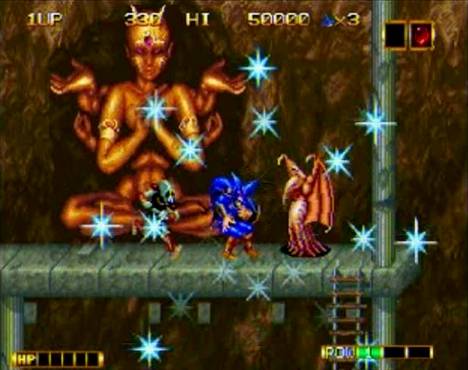 I wouldn’t say that the loading times were bad, but they do seem to make you wait a bit on some games, especially in the PSP version. It seems that the entire game is loaded into memory for both versions before the game starts; once that happens, everything is instant. The only exception is Shock Troopers on the PSP; it seems to need to load during gameplay, and sometimes the action lags a bit because of it. Otherwise, once you get going, load times won’t pose any problems.

Each of these titles has its own charms. Games like Samurai Showdown and Metal Slug have obvious retro appeal. One of my favorites was the so-bad-it’s-good platformer Magician Lord. I died countless times, but I enjoyed restarting every time, laughing at the lanky enemies all the while. I never had a chance to play Top Hunter before this, but the stretchy-armed action is good fun. Burning Fight is an old-style side-scrolling brawler, but I laughed out loud several times during my playthrough. The only game I wasn’t crazy about was Sengoku, and I think it had more to do with its clunky controls than anything else; I had no problems with the silly future guy fighting ancient Japanese warrior spirits at all. All of the games seemed to have an unintentional humor to them, so much so that I put together the above video to demonstrate.

SNK Playmore did a pretty good job of putting together a nice sampler of their classic titles. It’s fun to poke around and play through these older games. Going through them almost gave me a sense of strolling through the dimly lit arcades of yesteryear, armed with a pocket heavy with quarters. If you consider how valuable some of these titles are to collectors, you could say that you’re get thousands of dollars worth of games for your $20 (PS2) or $30 (PSP). If “old” is good in your book, this collection is definitely worth your time and money.

Score: 7.5 (Good. Replayable, fun, but nothing innovative or amazing. The game potentially has large flaws that, while they don’t make the game bad, prevent it from being as good as it could be.)