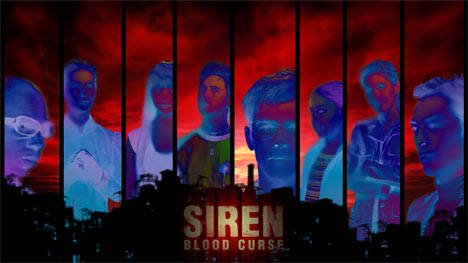 Silent Hill: Homecoming and Resident Evil 5 aren’t due until next year, and so in this gap of horror titles comes the remake of the PlayStation 2 title Siren. The original was considered an equal to Silent Hill in terms of its scariness, but had laughably-bad voice acting that left the game in some level of obscurity.

Now, the game comes alive as a remake for the PS3, one of the other few titles available on the PlayStation Network as a fully-downloadable game. Unless, of course, you imported it from Asia. The name of the game in this horror title is staying alive in a town that’s suddenly turned into a shibito-infested hellhole. As you jump around from perspective to perspective, the story behind this remote town slowly unravels in bits and pieces.

I’ve had high hopes for this title, and so now it’s time to see whether or not the game lives up to my dreams. Well, find out what Nick and I thought after the jump! 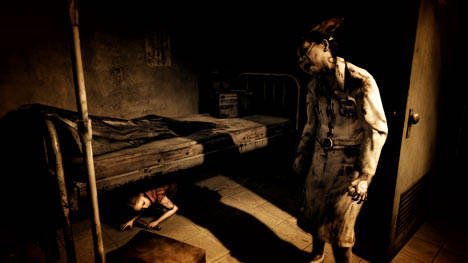 [Note: I went ahead and imported the Siren: New Translation disc (Asia Version). I don’t think there will be any discrepancies. The disc version is just all 12 episodes collected on the disc. When I complete one episode, it takes me back to the main menu and I have to select the next one — it should be just like the DLC version.]

An American camera crew sets off to film the bizarre cult rituals of a remote Japanese village, only to have the ceremony interrupted by a brash young American yankee, and the cultists scatter. For the Americans, they all get scattered when shibito (lit. dead person) start attacking them.

The game’s story is broken into twelve episodes, where you’re juggled between a half dozen different perspectives and storylines, as characters try to find each other, piece together bits of the backstory to the village, and try and make their way out of there. 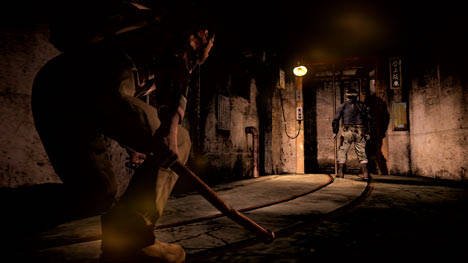 Siren: Blood Curse sits right in-between Silent Hill and Resident Evil in the spectrum of horror titles, as the game relies on atmosphere and a perpetual sense of terror to keep you frightened, but compared to Silent Hill‘s brand of psychological horror, Siren goes for a more gradual spiral into the depths of perversion and occult. The main enemy, the shibito, are fundamentally different from zombies. While they may be dead, they still carry weapons, can open doors, and they talk to themselves and each other. As the game progresses, the shibito progressively get more deformed and hellish, taking on new abilities.

Each stage that you play through is usually a “get from point A to point B” objective, but with a series of complications thrown into it, forcing you to traverse the entire level in order to find keys or alternate routes. You aren’t backtracking throughout the stages, but the game will have you play the same area several times over as you go through different persepctives.

Sometimes, you can fight the zombies. If you dare go up and start punching the zombie, there is no possible way to win. Once you dig up a beer bottle, kitchen knife, etc., you’ll be just fine, but try and get into a fisticuff with an 80-year-old shibito when you’re a strong 18-year-old? She’ll take you down no problem. Even when you have a weapon in your hand, there’s no guarantee — the fights turn out to be clunky, and if there are more than one shibito in the area, then they’ll gangrape you with little chance of survival. 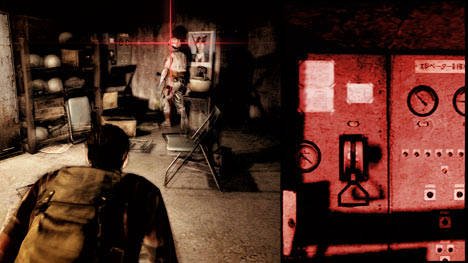 So how do you deal with the shibito? Well, you can hijack their brains and see through their eyes with a technique called “sightjacking.” You can choose to lock onto one of the shibito and have a split-screen view of what they’re doing while you try to maneuver around them. This is the only way to gauge how many shibito you’re dealing with, and sometimes, surprise! Another shibito will pop out of the woodwork and start raising hell on you.

In the graphics department, the models looks decent, but frequently falls into the problem of having the game be way too dark. Even with the flashlight on (when I have one), it’s oftentimes hard to distinguish what’s going on in the game. Added to that is the game’s near-constant grain filter on the screen gets to be rather irritating, as it detracts from the overall feel of things.

Right now, the horror genre is going through a change. Silent Hill is not a guaranteed success anymore, while Resident Evil has moved into different territory. Siren fills in the gap that the horror genre has been missing, although it is an awkward fit for a generational revamp of the original game. The story is still compelling and slowly spirals downwards into the more twisted and perverse, with several moments that leave you in shock. The game has a lot of room to grow, though, and can tighten up some of the aspects of combat and get rid of the damned grain filter.

Condemned 2 notwithstanding, the lack of new survival horrors this generation has been troubling. Like Brad, I had high hopes for Siren: Blood Curse, having eagerly been waiting for a PlayStation 3 nightmare to play through since the consoles launch. Unfortunately, while Blood Curse hits most of its expected marks, it’s ultimately not quite as satisfying as I’d hoped, and a can be a frequently frustrating experience.

If Siren: Blood Curse gets one thing right, it’s certainly in capturing an eerie mood. Played with the lights down, prepare for chills as the quick, yet zombie-like shibito amble out of the darkness in pursuit of your character. Their howls and spoken words are shrill and unnatural, altered in such a way that’s reminiscent of the creepiest parts of Sam Raimi’s original Evil Dead. Brad’s complaint that the game is too dark is spot on — I had to crank the default brightness significantly — but does quite a bit to add to the sense of dread and the unknown that makes for a good survival horror title.

Gameplay wise though, Blood Curse is all over the place, and the controls in particular feel a bit clumsy and dated. I loved that everything from garden hoes to shotguns — strewn all over the game’s twelve episodes — could be used in combat. Still, using them is not necessarily interesting or that satisfying, merely tapping a square repeatedly until a shibito drops or you randomly run them through in a more cinematic and violent manner. 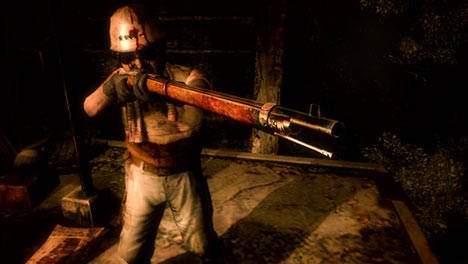 My biggest issue with Blood Curse, however, is how linear the title feels and how the game babysits you through nearly every mission. Each episode provides clear goals, most of which are “get from point A to point B”; each of these goals contains a sub-goal, usually along the lines of “get item x and use it with item y.” This linearity fails on two accounts. First, nearly every mission is characterized by these “go here” or “get this to go here” missions. Second, despite the hand-holding, you’re left to poke around areas aimlessly looking for the requisite items that the game demands you find before moving forward. Surprise — walking around in circles looking for a random item to use on another random item is not fun, interesting, or frightening.

The game’s “sight jacking” mechanic, a feature in which the player can see through the eyes of shibito through the use of split screen, is potentially interesting but is rarely used in creative enough ways to make it seem necessary. While “sight jacking” can be entered manually and used to track enemy movements and activities, there are points in the game that will obnoxiously switch to “sight jacking” split screen outside of the player’s control. When this happens it’s confusing and disjointed, sometimes ruining an otherwise suspenseful moment or making already difficult to see dark areas nearly impossible to navigate.

To say the story is nonsensical is an understatement. Even though the narrative pieces itself together over the course of the game’s twelve episodes, it’s not necessarily compelling enough to matter once you do figure it out. Much of the story is told outside of the game in the form of unlockables like diary pages, notes, video tapes, and more. Sometimes these unlockables are even more interesting than the game itself, which shouldn’t ever be the case. 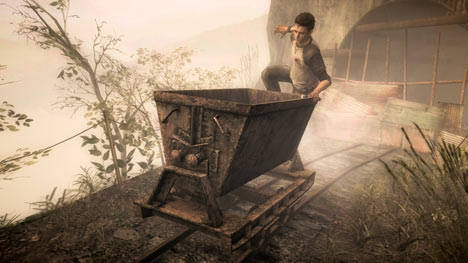 The episodic nature of Blood Curse is questionable, as well. The game is broken up in such a way that, presumably, is supposed to mirror a suspenseful television viewing experience, with previews and “previously on” clips tacked on in the end and beginning of episodes respectively. Think ABC’s Lost, except without compelling or coherent writing that successfully pulls you in and strings you along from episode to episodes. The finale of each episode rarely — if ever — leaves off on a gripping cliffhanger; it simply feels like a forced break in the action, taking you out of the narrative before it kicks you back to a title screen to select another episode. Additionally, it’s dubious that Sony decided to release all of the episodes at once on PSN, which leaves me wondering why the game is broken up into episodes at all.

For all my complaints about Siren: Blood Curse, it’s still hard to deny that the game delivers enough of what you’d expect from any survival horror title: scares. If you’re looking for groundbreaking storytelling or gameplay that advances the genre, you’ll certainly be disappointed. But for gamers looking for a few chills and who can forgive some of the same flaws that have haunted the genre for years, Siren: Blood Curse is at least worth a look.