When Sega Superstars Tennis was announced, I was as cynical as anybody else. Cramming Sonic the Hedgehog and all his forgotten friends into a tennis game reeked of commercialism, and yet as a former lover of all things Sega, I really wanted to check it out on the off chance that it was good. After all, nobody complains about the myriad Mario spin-offs, so why shouldn’t Sega try and tug our nostalgic heart strings?

Having spent many hours on the court with Sonic, Amigo, NiGHTS and yes, even the dwarf from Golden Axe, I feel I am in a qualified enough position to determine whether or not this “celebration of all things Sega” is something to celebrate, or just another sad step in the devolution of one of the industry’s most tragic former heroes.

Hit the jump for our review of Sega Superstars Tennis. 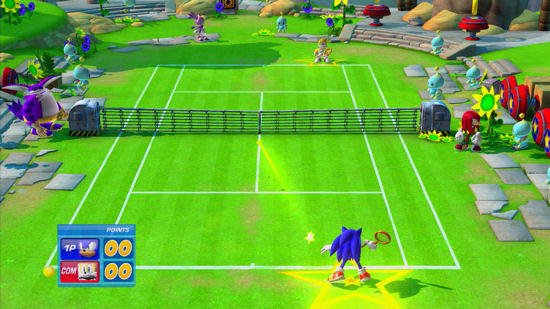 I’m not a player of sporting games by any stretch of the imagination, but throw in a few well-known anthropomorphic woodland creatures and I’m there. There’s something about bright colors and cartoon characters that makes sport games far more playable to me, and Sega Superstars Tennis is a prime example of that. I wasn’t expecting much from this title, but I’ve actually been playing it of my own accord, not just because I have to review it.

At the game’s core is a very basic tennis mechanic. The controls are incredibly simplistic, consisting of just moving around and pressing a button to hit the ball while dictating its direction with the analog stick. That’s about all there is to the main gameplay, but it works, so one can’t really complain. Things are spiced up by super powers, which are unique to each character and range from Super Sonic’s simple ball misdirection to Gilius’ nasty attack which causes lightning to rain down on the enemy’s court with each successful hit. 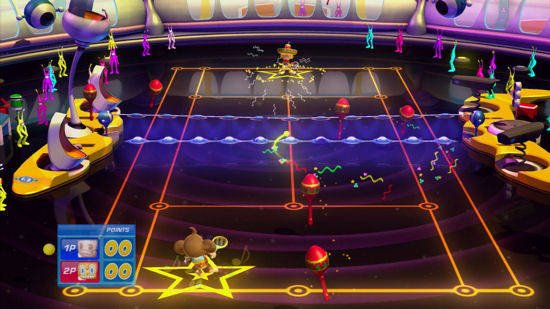 When you successfully hit the ball, a star outline underneath your character gradually fills and grows brighter. When the star is completely filled, a simple pull of the trigger will activate your special ability. Some of these powers aren’t especially useful, but a few of the characters are almost guaranteed a score when they initiate them. You will learn to fear Dr. Robotnik.

As expected, there are the usual options to play quick tennis matches, either as singles or doubles, and tournaments, but it is the Planet Superstars mode which serves as the main single player draw. Choosing from a variety of courts themed around plenty of past Sega games such as Virtua Squad, Alex Kidd, Jet Set Radio and of course, Sonic the Hedgehog, you take part in a ridiculously wide variety of tennis-themed minigame missions in order to unlock more courts, music tracks and characters. 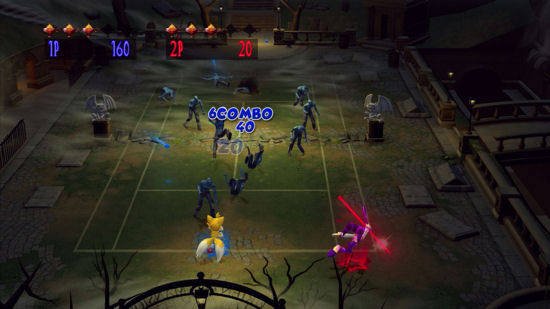 There are some pretty inventive missions on offer in this mode, ranging from such diverse ideas as merging tennis with a game of Puyo Pop Fever or launching balls at House of the Dead zombies. A few of the missions can get repetitive and frustrating, but there is an admirable amount of content to keep one going. It’s impressive to see how much diversity Sega manages to draw out of such a straightforward tennis mechanic.

You can also take Superstars online, and once again, the amount of effort that’s been put into things is quite pleasing. The usual suspects are here, player or ranked matches and tournaments. I found it quite easy to get singles games going but have not had much luck finding enough players for a tournament. The most impressive feature, however, is the “TV” option where you can actually watch other people’s matches live. You can also view replayed highlights of the the day’s previous matches, and on the Xbox 360, there’s even an achievement for being watched by someone and becoming a “TV star.” I’ve always thought spectator options in online games were cool, and it’s an excellent touch in Superstars. 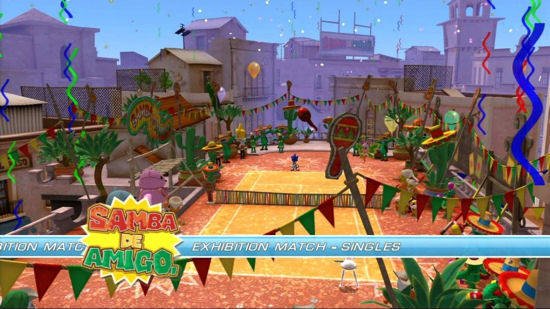 The game is, naturally, not perfect. While the simple controls work well, things are still sure to grow tiring after a while. This is definitely a game to be played in short bursts rather than day-long marathon sessions. The controls don’t always feel responsive, either. Maybe it was error on my part, but a few times I was certain I hit the correct button, only to have my character do nothing. The AI is somewhat spotty as well, especially during doubles matches. For the most part, your team-mate in a doubles match handles things swimmingly, often helping you win. At other times though, they are totally unreliable and will just stand there while you scream “You stupid monkey, hit the ball!”

Graphically, Sega Superstars Tennis is very much eye candy. Everything is bright, colorful and vivid, which makes a real change from the muddy grays and browns we’re so used to these days. If there’s one thing Sega nearly always does right, it’s make a visually impressive title, and I was visually impressed by this one. The game also has a variety of music from featured Sega games, which I’d love were it not for the fact that far too much attention is given to the cruddy modern Sonic music, and not nearly enough to the classic Sonic tunes. That said, unlocking Green Hill Zone was a delight. 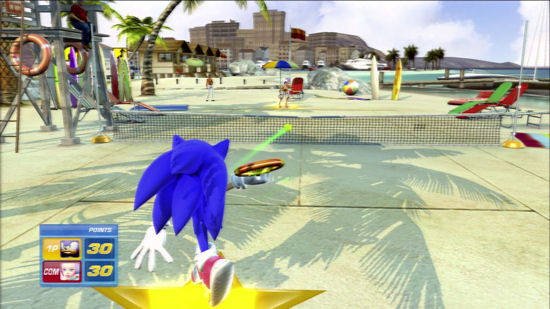 You probably don’t believe me, but Sega Superstars Tennis is actually good. It’s a damn solid game, with bright and beautiful graphics, simple but fun gameplay and a significant wad of content. While it’s certainly not a game you’d be spending weeks playing, it is a definite rental, and the most hardcore of Sega fans might be interesting in picking it up for keeps. As a breezy and nostalgic gaming trip, it’s definitely worth a little of your time, but it’s definitely something for people who know the characters and games that it draws from. I recommend you at least give it a try if you ever owned a Genesis or Dreamcast.

Score: 7.0 (Good – Replayable, fun, but nothing innovative or amazing. The game potentially has large flaws that, while they don’t make the game bad, prevent it from being as good as it could be.)