When I think of tandems, my mind instantly wanders to the Legion of Doom. Where would Hawk be without Animal? Or better yet, where would Animal be without Hawk? When I was younger, watching L.O.D. gave me an incredible insight into the world of teamwork and friendship. Together, the two face-painted rebels destroyed both the WWF and WCW with cohesive animosity. Their special move, the “Doomsday Device,” invoked fear into other teams. The rubber-spiked pauldrons probably didn’t hurt the scare factor either. When they wrestled apart, they were soulless beings and were incapable of invoking the vaunted special move. Basically, there were useless. It’s like having Lassie without Timmy, or Mr. Ed without peanut butter.

What I’m trying to get at is that dynamic tandems usually need each other. Ratchet and Clank are a cohesive unit just like L.O.D. Ratchet has the guns and brawn, while Clank always provides the emotional and cognitive stability. Secret Agent Clank was an attempt to pull Clank away from the equation and shove him into the limelight. Did the industrious little robot prove to be a Hawk, or did he become a Scott Hall?

Hey yo, hit the break for the full review. 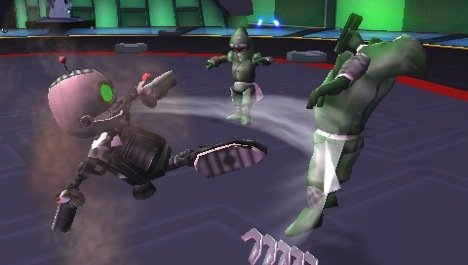 Secret Agent Clank is the story of Clank’s epic search for an object called the “Eye of Infinity.” At the beginning of the game, the Eye of Infinity is stolen by a person that appears to be Ratchet. Video cameras catch the lookalike in the act, and galactic authorities promptly imprison Ratchet for the crime. While Ratchet is in the slammer, Clank must assume the identity of a secret agent to find the Eye and clear Ratchet’s name.

The search for the object takes Clank all over the Ratchet and Clank universe. The locales include a museum, a fortress, a fortress with metal walls, and a fortress with lava pits. Across these wildly imagined levels, Clank is restricted to the tools of a secret agent, which is to say, hands and gadgets. Gadgets have always been a big part of the franchise, and you’ll find yourself leaning them quite a bit since Clank’s basic karate attack possesses the strength of a small child. The first gadget is a boomerang that can bounce between enemies on screen. Later in the game, Clank can utilize a flamethrower, holographic knuckles, and even a mine launcher. All of the gadgets that fire violent projectiles level up with use and can be upgraded with bolts, just like in every other Ratchet and Clank game.

I mention Clank’s strength specifically because Secret Agent Clank isn’t supposed to be about barreling through a level with guns blazing. High Impact tried to create a stealth-based game, with puzzle elements dispersed throughout the package. Unfortunately, it doesn’t pan out the way it was supposed to be played. Clank’s stealth abilities, the first of which is the ability to attach to glowing objects and “hide,” are somewhat pointless. Hiding usually entails a funny animation of Clank pulling leaves from a flowering pot and covering his face or posing like a statue. The problem is that getting to these objects you can hide behind is an exercise in futility because Clank can also perform stealth kills. When an enemy’s back is turned, a stealth kill can be activated by hitting a button, then following a simple sequence of random button presses on the screen. Why hide when you can maim just as easily? 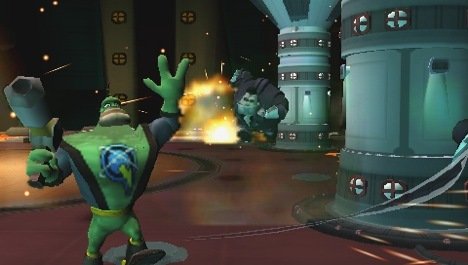 Interspersed between every level are mini-games that can be played. I use the term mini-games outside of the Wii context, of course. One game involves Ratchet in an arena-like setting, where the objective is to kill a set amount of enemy waves. Another collection focuses on Captain Qwark, everyone’s favorite failed superhero. His games are a combination of King of the Monsters and opera. These two collections tie directly into the storyline insofar as the first missions that can be played. Players get the opportunity to finish out the experience across several differing levels and difficulties if they so chose. If one gets tired of the experience, he can just opt to continue the storyline of Clank and his search for the Eye.

The games really don’t stop there though. Beside Ratchet and Qwark, there are driving games, a rhythm game, and a few others. These games are fairly straightforward, but can get excruciatingly difficult, especially the rhythm shit. Some missions end or begin with a Karaoke Revolution interface that puts the player in the driver-seat of Ratchet acting out an action to the music. The game sends out a few specific button presses, and players must push them as the beat plays. Unfortunately, these sequences can get entirely too lengthy towards the end of the game and if players gum it up, they have to start all the way over from the beginning again. At one point during the game, it took me twenty minutes to beat a rhythm section. It’s not like the music stuff is a bad idea, it’s just poorly placed and entirely too long.

There is one glaring technical problem in the game, and it’s an age-old problem. The camera is terrible and always pointed on Clank’s back. That means enemies can always get the jump on the player, and it can make fighting quite a chore. The developers tried to account for this issue by putting up a Metal Gear question mark warning when some enemies are located behind the player, but it still doesn’t help much as the enemies are much faster than Clank is. Another fairly large issue is the way the difficulty scales towards the end of the game. Most players will breeze through the experience until they hit the last few hours of play, and it’s a spectacularly iron-forged wall that they will smack. The game shifts from a reliance of hand-to-hand to gadgets on a particular level, thus creating issues finding ammo and upgrading weapons that were not readily used before. The same goes for some of the mini-games, which can suddenly become unattainable. 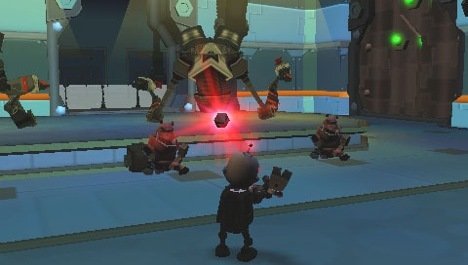 Visually, the game looks top-notch. I really enjoyed the character animations and cut-scenes in particular. The game as a whole is fairly detailed and definitely conveys a true-to-the-game Ratchet and Clank experience. All the voice-actors have come back complete with familiar lines. It was refreshing to have this portion of the experience on my PSP.

Altogether I enjoyed Secret Agent Clank, despite its issues. The game is a long journey, with ample save opportunities for those that can only throw in plays between hour-long intervals. Yet, even though I enjoyed the game, its flaws are terribly obvious. A sluggish camera, some bad gadgetry, inadequate fighting mechanics, poorly utilized stealth system and really shitty rhythm segments really injure what could have been a complete package. For a series that is as popular as Ratchet and Clank, a person should expect a game that is completely polished. I suggest renting or finding the game in a bargain bin instead of paying full price if you choose to check it out.

Score – 6.0 (Decent. Slightly above average, maybe a little niche. But I wouldn’t recommend it to everybody.)