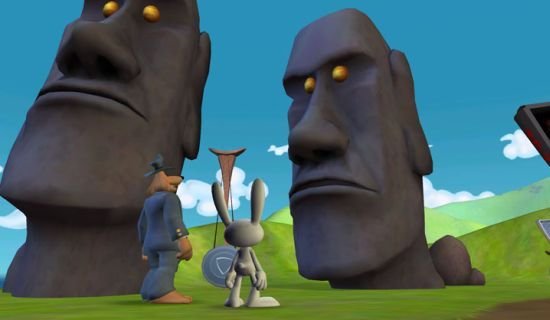 Another month, another Sam and Max episode. If you haven’t subscribed already, you should have; if you have, you might wanna know what you’re in for; if you don’t know what I’m talking about, then shame on you and shame on those who raised you.

Episode Two of Season Two takes everyone’s favorite furry freelance crime fighters to Easter Island for an adventure full of intrigue, comedy, and cultural references. We already reviewed the first episode of season two — does the second improve upon any of its faults, or is Sam and Max hitting its sophomore slump?

I should seriously hope this review is completely redundant for your purposes – that you’ve already purchased Sam and Max Season Two, and eagerly await each new episode with the enthusiasm of a twelve year old on Christmas Eve. The previous Sam and Max episodes, to put it briefly, are fun. Moai Better Blues is no different. Mostly. 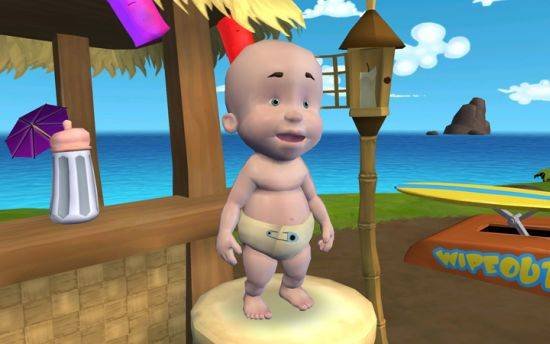 This time around, everybody’s favorite anthropomorphic duo has to save from an impending volcano eruption through use of portals, gongs, and talking Moai statues. The previous episodes were pretty damned funny, and Moai Better Blues is no different: the dialogue is crisp and funny as ever, the new supporting characters (many of which happen to be infant versions of some famous missing persons – don’t ask) are great, and the identity of the evil archenemy Sam and Max meet halfway through the game is so surreally wacky that I couldn’t bear spoiling it here.

Gameplay-wise, very little has changed; but again, this isn’t particularly awful. Moai’s action is confined almost exclusively to this time around, with only two or three necessary detours to Bosco’s and Stinky’s. Other episodes forced the player to spend a significant time in and around Sam and Max’s neighborhood; Moai keeps the player almost exclusively inside . This is not a huge difference, as none of the previous Sam and Max episodes have required a great deal of location-hopping, but it is a somewhat noticeable one. Personally, I preferred the change of scenery: getting used to the new characters and unusual puzzle logic of made for a fresher, more immersive puzzle-solving experience. As I wasn’t constantly worried that I’d have to run back to Bosco or Sybil to get a necessary item, I felt more at ease, and subsequently more interested, with my tasks on . 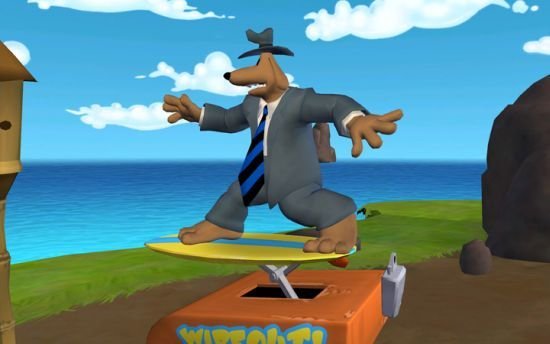 The unusual, somewhat out-of-place action sequences from Ice Station Santa are back, and they’re more irrelevant than ever. They’re kinda fun at times – the “rhythm minigame,” which requires the player to drive into bagpipe icons as they speed down the road, is interesting in its simplistic marriage of music and gameplay – but they’re not deep or challenging enough to really leave much of an impression, and (considering Sam and Max is, you know, an adventure game) it’s not as if fans of the series have been clamoring for these little twitch-reliant minigame distractions. Moai Better Blues’ action minigames are occasionally fun, but completely unnecessary and forgettable – they’re the Jennifer Aniston of videogames.

I’d hoped Sam and Max’s second season would feature some seriously increased difficulty; having completed the first two episodes of this year, however, it appears my wishes (and the wishes of many other die-hard Sam and Max fans) must go unfulfilled. The helpful, intuitive hint system is still around, but there’s never been less of a reason to use it: Moai Better Blues is, to my mind, the single easiest Sam and Max episode ever released. I only paused to really think things through once or twice throughout the entire 3-4 hour running time, and my initial puzzle-solving instincts were never wrong. I say this not as an adventure gaming master – I literally need a walkthrough in order to progress through any LucasArts or Sierra adventure title – but Moai’s puzzles are disappointingly easy (perhaps due to the fact that many problems revolve around use of portals, a game mechanic many of us have just had a great deal of experience with). 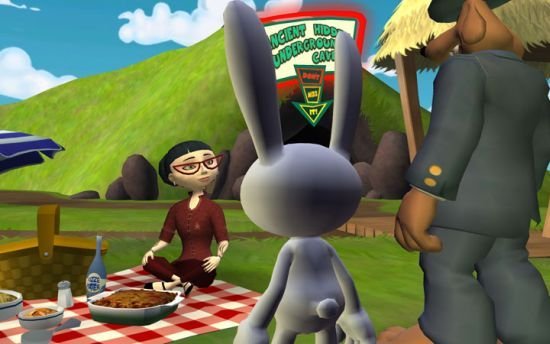 Beyond its simplistic, obvious puzzle solutions, Moai Better Blues sadly neglects to include one of the greatest staples of the Sam and Max episodic series: the boss showdowns. Every other Sam and Max episode climaxes by placing Sam and Max in some sort of seemingly impossible situation they cannot escape, where they have to (through a mix of wits and violence) defeat the episode’s main antagonist. In Situation: Comedy, Sam had to trick a hypnotized talk show host into knocking herself unconscious. In Ice Station Santa, the duo had to face off against an evil, SMG-toting Santa Claus. In Moai Better Blues, our heroes have to, uh, throw a specific item into a portal. This episode ends with a whimper, where all others ended with a bang; considering how funny and odd the episode’s antagonist is, I would have loved to see a puzzling boss showdown, but instead the developers opted to conclude the story with a boring, nondescript, slightly tweaked version of a puzzle from earlier in the episode. To be honest, it almost feels like Telltale ran out of time and/or money and were forced to end the game prematurely.

All things considered, Moai Better Blues is a fun, entertaining, but unfortunately disappointing entry in the Sam and Max series. It retains the great writing of the other episodes, but its considerable lack of difficulty and completely lackluster ending make this episode the worst in the series thus far. Granted, being the worst Sam and Max episode is like being the ugliest Playboy bunny or the least bitchy co-host on The View; it’s generally effective at what it sets out to do, and fans of the other episodes will still find a great deal of enjoyment out of it, but Moai Better Blues could stand to be much better.