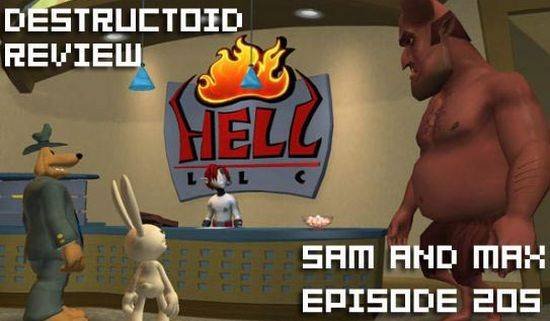 Ah, the season finale: a time when plot threads are tied up, true motives are revealed, and evil enemies come to light. Season finales are about climax, conclusion, satisfaction.

While we’re pretty sure our characters will be back for another round come next year, we still want to see the season’s main story arcs come to a close.

As Sam and Max‘s second season finally comes to its fifth and final episode, one can’t help but have some questions: will it be sufficiently climactic? Will Sam and Max find out the identity of T-H-E-M? Will my questions be answered? Will I ever be able to write an intro paragraph to a review without filling an entire paragraph full of interrogative sentences which I then promise will be more or less answered after the jump?

Episode 205, What’s New, Beelzebub?, has the cards stacked against it from the get-go – it’s the season finale, so it’s supposed to be shocking and epic and essentially the best entry in the season, but it also has the rotten luck of following the single best episode in the entire series. Chariots of the Dogs was hilarious, challenging, and introduced a new puzzle-solving mechanic that put a new spin on the entire series. With the second-to-last episode being so incredibly funny and cool, how could the season finale possibly top it?

Well, it can’t. Not quite, anyway. 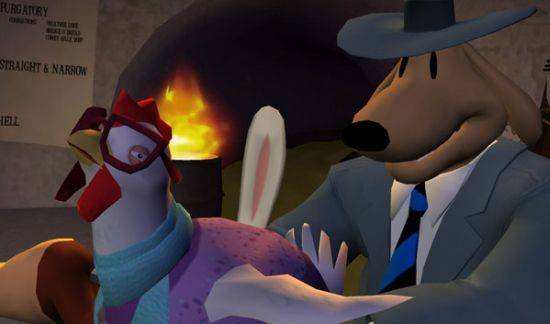 Episode 205 picks up right where 204 left off, as Sam and Max jump through a portal in search of Bosco’s soul. As you might have guessed from the episode title, the anthropomorphic detectives’ chase leads them straight to the land of the dead. Jokes ensue, but I’d be spoiling them if I said anything more — suffice to say, some old friends and enemies make appearances (as always), and the episode includes more than a few belly-laughs (as always).

Story-wise, Beelzebub is pretty solid save for one huge misstep near the episode’s end. It deals, incidentally, with the big reveal of the season’s main villain, and it could have been handled a lot better. The moment the villain is unveilled, the player is meant to experience a sort of “oh god, it’s HIM” sort of revelation that accompanies the best twists in storytelling, but the twist is sort of spoiled by a puzzle which, while very, very funny on its own, introduces that same character in a different context literally moments before his big reveal.

It’s sort of like if you were talking about The Sixth Sense with a friend who hadn’t seen it, and you began talking about how weird it’d be if the main character of a totally different movie happened to be a ghost the entire time, and then you told him about the big twist at the end of the movie. You didn’t technically tell him the twist before you were supposed to, but you got close enough to the subject that the actual twist lost most of its oomph. Such is the case with the big villain reveal in Beelzebub, sadly. 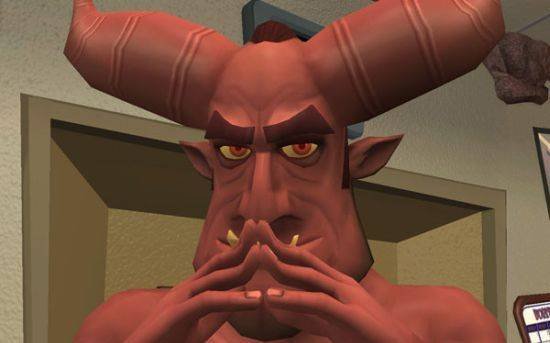 Other than that gargantuan lapse in storytelling judgment, Beelzebub has some really great moments. We get to see several different characters’ personal versions of hell, some small revelations are made, and the entire epilogue is satisfyingly lengthy, funny, and melodramatic. Narratively, it’s a fitting end to the season, even if it doesn’t have the punch of Chariots.

The puzzles are solid on their own merits, but, again, it’s pretty difficult to be amazed after playing around with the absolutely brilliant time travel puzzles in Chariots of the Dogs. Episode 205 moves back to a more or less standard puzzle format, with Sam and Max having to run around different locales and use inventory items with environmental items in realtime. Were it not for the fact that this episode finally nails its sweet spot where difficulty is concerned, I’d be rather disappointed in Beelzebub‘s gameplay. 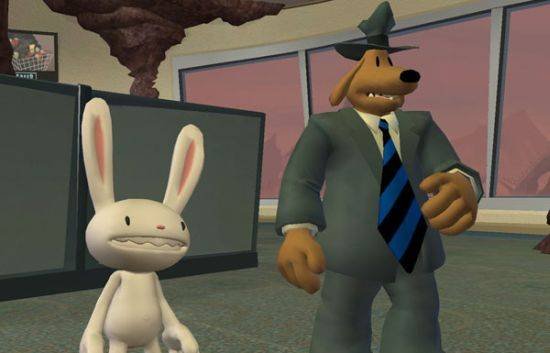 While a few of the puzzles are as easy as ones you might see in Season One, many moments in Beelzebub will have you scratching your head in that oh-so-pleasant “I have a general idea of what I am supposed to do but no real clue as to how to do it” feeling that adventure games are so good at — especially where the “boss puzzle” at the game’s end (there is one, thankfully) is concerned.

In the end, What’s New, Beelzebub is a solid episode in its own right, and a great end to the series…but it’s hard not to be a little disappointed coming right off Chariots of the Dogs. As funny and challenging and sort-of climactic as Beelzebub is, while playing it I couldn’t help but wish that Telltale had found some way to switch around the final two episodes, moving the awesome time travel puzzles into the season finale. But hey — if wishes were steak, I’d never go hungry, and now that you know Beelzebub will be sort of disappointing, then it won’t be as much of a letdown.

Either way, What’s New, Beelzebub? is a great way to wrap up the series (apart from that hugely abortive pre-revelation spoiler), and it’s a damn fine bit of episodic gaming in its own right. Get it.

In the same way that What’s New, Beezlebub? has the unfortunate luck of following the amazing Chariots of the Dogs, I have to find something that Anthony hasn’t already pegged perfectly: Beelzebub is a well-written, sufficiently challenging episode and a nice wrap-up to an equally
good season. 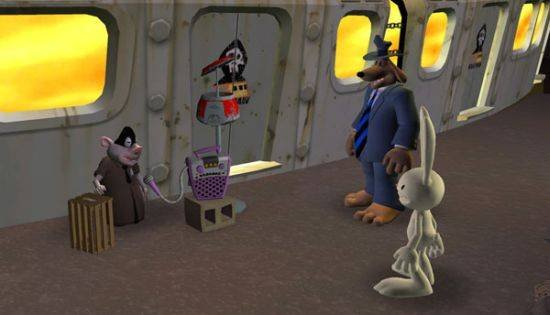 As Anthony mentioned, most of Beelzebub is split between familiar Sam & Max environs —
Bosco’s, Stinky’s, Sybill’s — and the dark underworld. This gave Telltale a bit of material to
work with, but, aside from a few pithy references to The Divine Comedy, there are only a few
ways to rework the word “hell” in a comedic context. Taken in conjunction with what I thought to be a rather anti-climactic ending, Beelzebub seems to lag a bit in the writing department,
which is frustrating for a series so rich with humor and clever narrative. I should mention,
though, that I’m being rather harsh on Beezlebub by comparing it to other episodes — by any
standard it’s still leaps and bounds funnier than any other game that I’ve played recently.

While the jokes may have suffered from an over-reliance on the Hell motif, the puzzles
certainly benefit. Without spoiling anything, the puzzles that move between Hell and Earth
are incredibly satisfying, mind-bendingly clever, and are examples of sound game design on
Telltale’s part. As an added bonus, the distracting, twitch-based driving mini-game is totally
optional this go around. 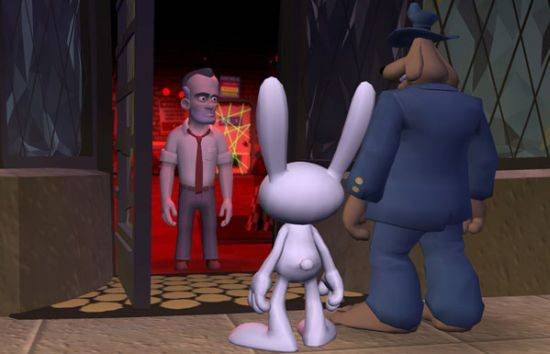 Anthony said that Beelzebub hit the sweet spot in terms of difficulty, and I have to agree. For example, I found the ending puzzle pretty straightforward, though it left Anthony scratching
his head. On the other hand, the puzzle that he found “very, very funny” I found embarrassingly difficult. This isn’t any fault on Beelzebub‘s part, but a testament to Telltale’s sense of game design — to be able to create two totally different experiences in two totally different
players is something for which all developers should strive.

All in all, What’s New, Beelzebub? is a sound installment of Sam & Max Season Two. It’s funny, its puzzles are satisfying, and, as Anthony mentioned, is a fine example of episodic gaming’s potential.

Score: 8.25 (Very fun — its essential gameplay aspects are cool and interesting, but may not be implemented in the best way.)