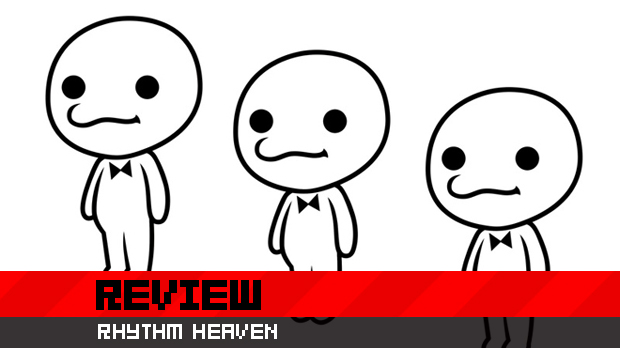 Dale North and I tried our best to try to convince you that you needed to import a copy of Rhythm Tengoku Gold for the Nintendo DS back in September of last year, and you know, if you didn’t buy it, goddammit, you should have. The only acceptable excuse for not having bought it, I suppose, is that we have known since E3 2008 that an English language version was on the way, and I can imagine some of you wanted to wait for a copy you could read if you’re not so sharp when it comes to Nihongo.

With localization comes change though, and if you’ve been following the title you already know that some Destructoid editors are less than pleased with the way some of the songs have been translated. Considering we brought you the original review, Dale and I thought it would be ideal to return for an encore and help you to decide whether to buy Rhythm Heaven … or whether you’re better off importing the game and sticking with the original.

So, for starters, if you haven’t already read the import review of this game, I’d urge you to do so as it summarizes what the gameplay is like. It does not differ at all from the original title, so if you’ve read that review you already understand what you are in for. In case you haven’t, I’ll revisit it for you here so you don’t have to go to the trouble of clicking a link and going backwards through internet time ( I hear you can get lost forever there).

Rhythm Heaven, much like it’s predecessor Rhythm Tengoku, is built on a very simple premise: tap to the beat of the rhythm as you play minigames. While it sounds simple, the challenge comes in when you want to get a perfect score on every game. An additional level of challenge is presented when the game randomly gives you the chance to replay a game you’ve already completed to get a perfect rating, which earns you special bonuses in the in-game cafe such as music to listen to and books to read.

In total there are ten sets of games to play, each containing four minigames and one “remix” level which mixes elements of all the games of the level into one game. While I like some minigames more than others, I’m all about the Remix levels, which I have favored ever since the first Rhythm Tengoku title. As for the separate minigames, they hold all the strange charm that the previous title’s games had. Standouts include the Frog Hop, where you play one of a trio of backup dancers, Crop Stomp, where you play a farmer rhythmically stomping his way through a garden pulling up beets and kicking away pesky moles, and Love Lab, where you try to keep flasks from breaking while you sow the seeds of love with a deliciously nerdy-looking scientist. 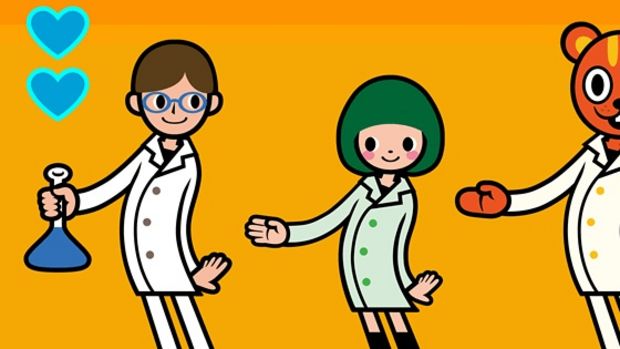 What an amazing song.

At first, you are not going to think the game is so tough if you play a decent amount of rhythm titles — after all, plug your headphones in and focus on the beat and you really can’t go wrong here. The difficulty ramps up significantly after you complete the first 30 games, and you’ll find yourself playing advanced levels of the games you’ve already completed. Some of them are passable with an OK rating, but are going to give you a hell of a time if you’re going for a full slate of perfect scores. I still groan in fear every time I load up the second “Rockers” level, for instance — I cannot get a perfect on that freaking thing to save my life.

While I originally thought that the only difference between the two games was going to be the addition of some English lyrics and the ability to actually read the instructions for each of the games, the plus of being able to read everything you can unlock in the cafe slipped my mind. While none of it is essential in any way to the gameplay, it adds a nice touch of whimsy that compliments the overall game. I like knowing that the robots are fussy, for instance, if I fill some of them up more than others, or that the Güiro lizards come from the desert and the male dwarfs the female. It shows a bit of extra effort that the developers didn’t have to take, but chose to anyway, and I like that touch of whimsy.

The heart of Rhythm Tengoku Gold is more or less perfectly preserved in Rhythm Heaven: the music itself. I can’t disagree that some of the dubs are less than stellar, Fan Club being the worst of the lot, which has you as a member of a fan club of obediant monkeys. The Frog Hop is also dubbed, but fits perfectly in time and mood with the original composition, but the vocalist in Fan Club sounds like she hasn’t had an exciting experience in the last twenty years.

Of course, these are all tiny details that obsessive fans of the import are going to notice, but let’s face it — the majority of people that are going to be playing Rhythm Heaven have never played the import and never will, while rabid fans of the Tengoku series imported it on day one and would have no real need to buy Rhythm Heaven anyway (except perhaps curiousity).I feel the need to stress this here, because what you have in your hands if you buy Heaven is still very much an incredible game, with only minor tweaks to help it appeal a bit more to the North American audience it was intended for. If wading your way through Japanese intimidates you but you still have interest in this game, don’t miss Rhythm Heaven, because games this good and this addictive are few and far between.

We already said that Rhythm Heaven, in its Japanese form as Rhythm Tengoku Gold, is a fantastic game that should be at the top of your purchase list as a DS or DSi owner. If you didn’t buy it as a Japanese import per our recommendation, you’ll definitely want to get the US release coming April 5th. As a whole, it’s even better now. Now you can read the directions and get all of the jokes.

Other than the text and the language of a few songs, very little has changed in translation. You’re still getting the insanely quirky and addictive rhythm game that took Japan by storm last year. Nintendo only changed what they deemed as necessary for release, which means that only a few of the numerous songs received a new English language voice track. And of those, only a couple are questionable. Half-assed is probably a better word. The singing is dull and uninspired, especially when compared to the Japanese versions. As a producer of this game, I would have never signed off on this work.

That being said, neither of these instances of crap singing are dealbreakers. In fact, if you’ve never played the import version, you’d probably think nothing of the performance. More importantly, the game play for these stages with questionable singing performances are still fun. And since all of the levels are short, bite-sized affairs, you’ll quickly move past it and on to the next thing anyway. And not all of the English performances are bad. The “Frog Hop” stage, called “Kero Kero Dance” in the Japanese version, received a fantastic overhaul in English, with the performance and lyrics absolutely nailing the intent and style of the original. The rest of the songs are untouched, and still brilliant. Stages like “DJ School” and “Love Lab” were already perfect, universal in appeal. 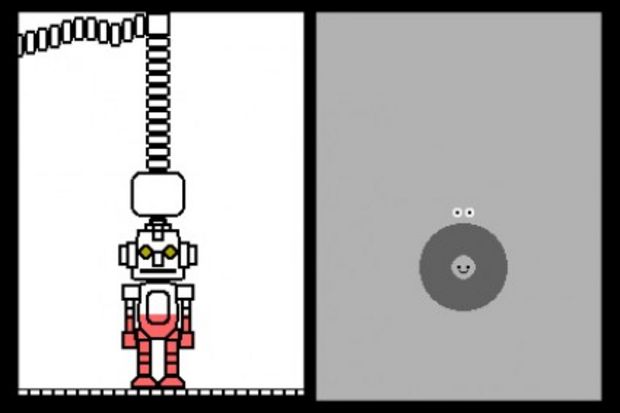 This stage is hard.

While the sound is important, the real fun is in the rhythm, hence the game’s name. Tapping out beats, changing out rhythms, and ignoring hilarious distractions is where it’s at here. It’s all stylus and screen based, with the DS/DSi held sideways. It doesn’t get any simpler than that, right?

Things start out simple, like keeping time, but then quickly ramp up to beats and rhythms that would give even the musically inclined a challenge. In-game tutorials show you the basics, but it’s up to you and your sense of rhythm to keep it going until the end of the stage. When you do well, the in-game scoring congratulates you with a nice message and a cute picture — and maybe even a medal you can use to buy more fun. If you mess it up, the game has no problem poking fun at you.

Don’t worry about the changes in translation. You’ll be too busy looking at the crazy birds pooping on singing statues and soccer players flying through space while trying to keep a decent beat anyway. And that’s really the point of Rhythm Heaven. These musical minigames are ones that will make you laugh, challenge your sense of timing and reflex, and keep you coming back again and again. You’ll fall in love. And now, with the title in English, our beloved gaming series can now have a presence in geek watercooler talk here in America. Now people will finally know what the hell I’m doing when I do the turnip dance after having a few drinks. Other than the series predecessors, there’s nothing else like Rhythm Heaven — don’t miss it.