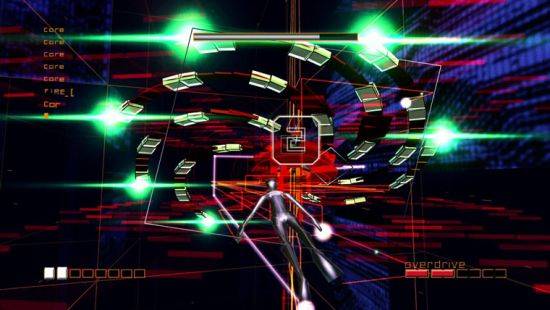 Ah, Rez — the cult classic of cult classics. Tetsuya Mizuguchi’s attempted synthesis of retro graphics, pulsing trance beats, simplistic on-rails shooter gameplay, and rhythmic vibration remains etched in videogaming’s collective memory, despite (or perhaps because of) how damned hard it was to find a working copy of the game for under fifty bucks.

That all changes with Rez HD. Costing only 800 Microsoft points, gamers the world over can now experience Mizuguchi’s synaesthetic slice of weirdness without having to break the bank or deal with dated, 4:3 graphics.

But this raises the question: six years after its release, is Rez even worth playing anymore? With multiple free, independently developed rhythm games like Audiosurf or Synaesthete already on the market, does Rez HD, even with its improved graphics and lower price, have anything to offer anymore?

Let’s find out! But first, a disclaimer:

If you ever come to my house, do not touch my second 360 controller. It has come into contact with my testicles.

Before discussing what’s new with Rez HD, we’d do well to examine the old — is Rez even that enjoyable a playing experience anymore? I say “playing experience” because, as we discussed on this week’s Podtoid, it doesn’t work too well as an actual game.

Rez‘s actual controls are incredibly simple: the player holds down the A button and drag the cursor over enemies to lock onto them (up to 8 at a time), releasing the button to fire. You can also press the B button to go into “overdrive” mode, which basically makes the player uber-powerful for a few seconds. And that’s it. You can rack up some decent combos, and the boss fights are decently suspenseful, but, from a gameplay point of view, that’s really all there is to Rez: point and shoot.

In this sense, Rez HD is unchanged from its predecessor. You’ve still only got those two buttons, the game is still on rails, and there are still only five levels which can be played in regular, score attack, or “I don’t feel like taking any damage because I’m a wuss” modes. 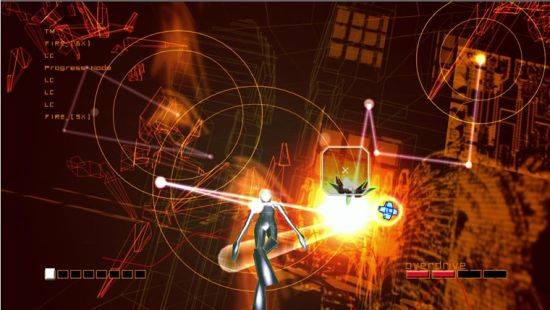 On the one hand, the lack of new levels makes sense — trying to add new stuff, and failing, could lead to definite suckitude — but on the other hand, even for a modestly priced XBLA game, Rez HD can still be completed within an hour and a half. I don’t ask for epic running times out of my games, but when one can play Wik and the Fable of Souls or Eets for hours at a time for the same amount of money it costs to play 90 minutes of Rez HD, I can’t help but be a little disappointed in the lack of truly new gameplay. Still, perhaps this is unfair; two weeks ago, the average gamer would have had to pay $50 to get what he or she can now get for $10.

That said, Rez HD is not without its improvements — the most obvious of which being the graphics. Players can now experience Rez in full widescreen mode, and in one of any variety of visual palette changes (sepia, tile, bloom, blur, glare). While the bloom and glare filters were pretty, they make the boss fights more or less impossible as the player’s eyes are overwhelmed with bloom effect upon bloom effect. Similarly, the sepia, tile (should be called “pixelate”) and blur filters look kinda neat, but ultimately harm the gameplay experience. Still, the normal mode looks quite impressive on an HDTV — especially the final level — and, should you find yourself irritated by all this newfangled technology, you can always play the classic non-HD version of Rez whenever you’d like.

But hey — in the end, this is all irrelevant. As I said, Rez doesn’t function primarily as a game: it functions as a playing experience. It’s not about the shooting and powerups so much as it is the marriage of the audio, visual, virtual, and tactile. The way the music and vibration get more intense and labored as the levels progress, how the bullet and explosion sound effects really just add another layer of musical notes to the level’s score — this is what Rez is all about. 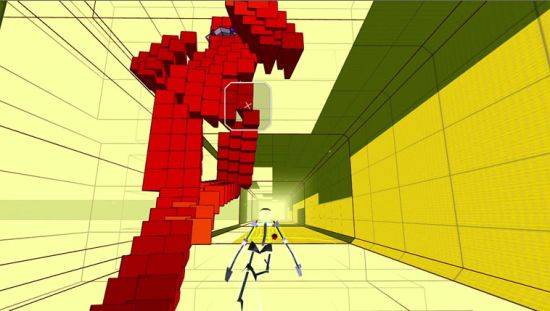 Call me crazy, but, even knowing what Rez is all about, and even with a second 360-controller-cum-trance-vibrator firmly placed atop my balls, Rez HD failed to impress me in the same way Rez did so many years ago. Perhaps it’s the fact that, between the first Rez and this new version, I’d immersed myself in games like Synaesthete — games which successfully couple music and gameplay to the point where the player experiences the game exactly as he or she would a music video. Compared to these titles, Rez HD, even with its updated graphics and improved trance vibration, now feels rather antiquated. Rez HD is decently fun today, but nowhere near as intriguing as it once was or could be.

The music is good, but not strong enough to truly immerse me in the action; the vibration is rhythmic, but ultimately weak and easy to ignore (yes, I actually managed to forget the fact that my balls were vibrating); the gameplay and accompanying sound effects so rarely match up with the actual beat of the score that they too become ultimately lost in the shuffle. I see how Rez HD could be incredible and pulse-pounding and immersive, because I’ve seen its sensibilities applied to other independent titles — as it stands, Rez just seems like the first stage of evolution in a gaming genre which has since exceeded its origins in both scope and efficiency.

Rez HD is a good game all around, but it’s nothing spectacular. If you already own Rez for the PS2 or Dreamcast, and are wondering whether or not the HD version is worth the extra ten bucks, I’d argue it isn’t — the graphics look great, but Rez HD brings nothing new to the table in terms of actual gameplay. If you haven’t ever played Rez before, download the trial to Rez HD. If you enjoy what you find even minutely, then buy the full game as soon as humanly possible, then download Synaesthete and Audiosurf and Minubeat. Rez HD is generally good, but in a world where you can get those aforementioned games for free…well, it just doesn’t satisfy like it used to.

(i.e., download the trial and use your own discretion)