After playing Resistance 2 at length, I wondered if Insomniac suffered from the same issue that Bungie probably had with the Halo trilogy — development time. Time is a funny thing. Take too much and fans are disappointed. If a developer takes too little, fans are disappointed. It’s a thin line, indeed. The original Resistance title, Fall of Man, was a flagship title for the PlayStation 3, much like Halo: Combat Evolved was for the Xbox. Success and generally fabulous reviews do have one setback — publishers always want more.

Zoom ahead several years and you notice that Bungie had to crank out a few more Halo titles to keep Microsoft happy. In a mere two years, Insomniac was able to put out Resistance 2.

Was Resistance 2 under the hood long enough or does it suffer from some of the same problems that Halo 2 had? Hit the break for the full review. 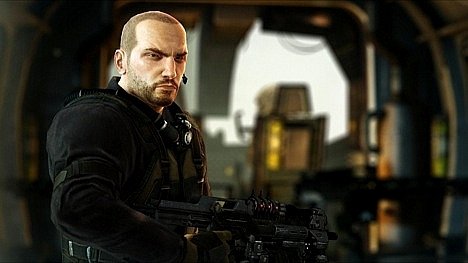 The story picks up right where Resistance: Fall of Man left off. Nathan Hale is shown bloody, broken and stumbling before being unceremoniously picked up by an American special operations team. At this point, the game flashes ahead several years, and we find Hale a vocal leader, fully in charge and capable of delivering some killing blows to the Chimera that are now invading the United States. Again, it’s up to Hale and a mix of scatter-brained allies to not only defend a country, but to put an end to the alien scourge permanently.

It is a traditional shooter’s storyline — one that is becoming tired. To Insomniac’s credit, the timeframe of the 1950s and the mid-storyline intrigue shake up what could have been a spectacularly dull affair. In the same regard, there is much to be said about what Insomniac didn’t do — namely, outlining anything about Hale past his eye color. Despite Hale’s uncharacteristic wailing of orders, the audience never gets a sense of his personal motivations or a true glimpse of emotion. The story, while quite clear in its purpose, never strays from the general theme. It becomes so broad past the introductory level that it becomes hard to follow why Hale is jumping from locale to locale to save the world. 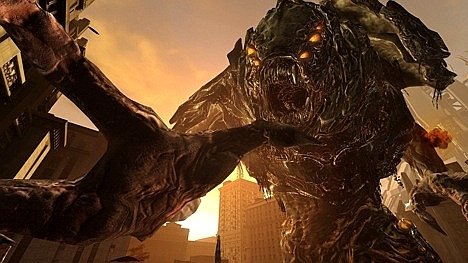 The single-player campaign has its moments of excellence. The action is always tense and the scale of battle is simply enormous — much like the majority of the “boss” monsters. There is a conveyance of scale at nearly every turn and odds often feel insurmountable. There is also something to say about the timing required in the big time fights in the game, especially with the Leviathan in the Chicago level. Seeing the Leviathan ripping buildings to shreds and tossing you from building to building before finally being brought to a halt with a skilled shot is something that I haven’t experienced before. It brings a plethora of emotion to the forefront, with awe being the big one.

But it isn’t without a handful of shortcomings that practically break the entire experience. The most glaring issue is that you will die entirely too much from asshole monsters with instant-kill weaponry or claws. Fighting off dozens of enemies simultaneously is a rough job to begin with, but having to contend with the boundary-defying Auger shooting through the walls you’re hiding behind or the new invisible Chimera that spontaneously appear to wreak havoc on your body have a tendency lead to quick deaths that you simply can’t avoid without being ridiculously careful. Furthering the frustration is the dangerously accurate Chimera that can also take more than a fair share of bullets to kill.

The big problem is that you are always put in situations that require some sort of leniency on the side of the game. Having dozens of crackshot Chimera on-screen and rushing towards you isn’t fun. What is fun is actually succeeding, killing, and shredding these monsters — it isn’t having to look at your dead body every 15 seconds or restarting the checkpoint. Some sections of the game are pure trial and error to the point of extreme frustration. 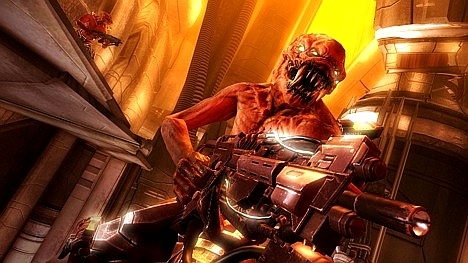 The campaign is woefully short, especially if you factor out the amount of restarts. It also lacks decent cohesion as a result of the billions of deaths you’ll incur. Often the game can feel almost too linear, with the frequent item drops indicating what is coming around the corner. It’s like an RPG save point before a door in a dungeon — you know a boss or a mass of enemies is coming. The frequency of death also kills the narrative flow of the game. The storyline is mainly delivered through conversations in Hale’s earpiece, but the voices become insignificant when having to rehash the same section of the level several times. Visuals help aid the ailing campaign. Textures are well-defined and character models look spectacular — especially the new type of Chimera. The locales are also wonderfully detailed and are set to impress.

When the game starts clicking and you pass several objectives without problems, it’s not only rare, but it is wonderful. There’s something to be said about the excellent atmosphere in some levels, but it’s quickly hindered by the above problems. Thankfully, nothing on Hale’s end really stops the momentum. Weapons are unique and very useable. All the guns from Fall of Man make a comeback, but they possess much tighter reticules and generally perform better — especially the Chimeran assault rifle, the Bullseye. 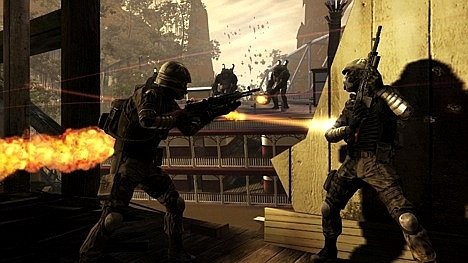 Standard conflict is characterized by a storm of bullets quickly approaching the protagonist’s face. Squadmates will constantly remind you to take cover behind a barrier (by crouching) and allow your health to regenerate. Health regeneration is a quick affair if a Chimera armed with an Auger, or one of the many nasty grenades, isn’t staring down your piece of wall. Excellent level design (which really translates to the cooperative and competitive multiplayer) keeps the action chunked into digestible pieces.

The best experience that Resistance 2 provides comes from its two multiplayer modes. The cooperative mode is a completely separate storyline from the campaign, featuring teams of eight people getting to a location after or before Hale has crossed it. Of course, story isn’t necessarily the reason why you play; it’s the thrill of working with eight people and gathering experience points to buy new upgrades for your character. There are three classes of characters in the cooperative portion: medic, special operations, and soldier. The medic is responsible for healing teammates, the spec ops is responsible for dropping ammunition to the entire team. These are easy tasks, but vital to the team actually winning the game. The enemies in cooperative are insanely tough (albeit dumb) and will occasionally take thousands of bullets to bring down. It’s almost inebriating to watch the soldier and his machine gun lay down hundreds and hundreds of bullets into a Titan’s head before it falters and blows into pieces. 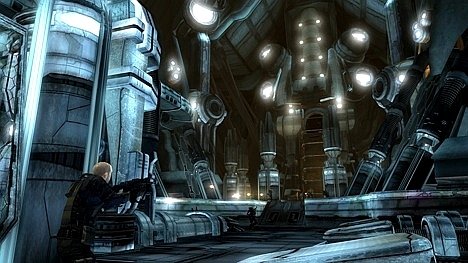 The six levels in cooperative mode are all borrowed from the campaign, but represent the excellent array of places to fight. Hulls of ships, hallways, southern environments, as well as a forest are all available. The selection makes it seem as if you will get burned out slowly, but the different variables employed on the maps are sure to keep you intrigued for countless hours. The way the experience system is utilized in terms of upgrades ensures many hours as well, although I kind of question that notion. I wish that there were more armor choices, more customizing from the onset. I also wanted Berserks to be slightly more effective. Berserks (which are used in the competitive aspect as well) are special powers granted when a sufficient amount of enemies have been harmed or killed. They’re powered by a small bar on the upper right of your HUD and gives players abilities like Call of Duty 4’s martyrdom or increased defense.

The competitive portion of the multiplayer is vast and exciting. There are several modes of play, all of which are standard shooter fare. The majority of the maps can hold up to 60 players, but Insomniac managed to break down what could have been a monumental clusterfuck fairly ingeniously. Every time you join a room this large (or of any size in Team Deathmatch or Skirmish) you’re put into a squad of five people. These are the five people you can talk to and accomplish objectives with. In a way, you’re competing not only with the enemy, but also against other squads on your team. The in-game radar keeps track of where enemies are to minimize someone who may be camping, waiting for 30 people to spawn. The XP earned can, once again, be utilized for enhancing your character’s appearance. XP can only be earned in ranked matches, which is odd, because you can’t bring your friends into such confrontations. 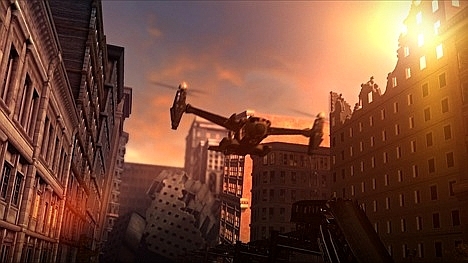 But the amount of private matches is spectacular — you’ll always find a place to play. The same goes for the ranked. The levels in competitive are broken up much like the cooperative — they’re spun from the campaign, but presented in a way that allows for these confrontations. They’re all solid offerings, but the amount of spawn camping is a tad out of hand. With 30 opponents it can become a struggle to live for more than ten seconds at a time. The visuals don’t take much of a kickback in this mode either, which is great and a testament to Insomniac’s ability to bring a rich but massive experience to players practically latency-free without an enormous amount of technical errors, glitches, timeouts, or freezes.

Resistance 2 is a great shooter with outstanding multiplayer components that transcend its lackluster single player campaign. The campaign’s scale and the ingenuity displayed in the boss fights will give players an experience they have never had before, but it ultimately collapses on itself with poor design and execution in both level and story progression. The audio and visuals are excellent set pieces and definitely aren’t a detraction. The problems with the campaign aren’t brought into the fold in the two separate multiplayer components, which are above and beyond any PlayStation Network title thus far. The integration of a party system and the intuitiveness inherent to the matchmaking make it a simple and easy task to find a place to play. Furthermore, the cooperative and competitive modes are deep and entrenched in many RPG aspects that should keep fans seeking more conflict for many more months to come. And, finally, shooting monsters in the face, especially with a rocket launcher, is always a good time. Just ask Nathan Hale, he knows all about it.