Irem’s R-Type is probably the definitive side-scrolling shooter. In it, players take control of a single ship in an attempt to save the the universe from a strange alien life form known as Bydo. This late-1980’s arcade classic has since expanded into a full series of shooters, and collectively they’re known for their high level of difficulty. They’ve all tested players’ reflexes and trigger fingers, and series fans can tell you that plenty quarters (or continues) are required to complete these titles.

The series’ latest title, R-Type Command, does not require quick reflexes or an apt trigger finger, though you might still require a few of those “continues.” Irem has taken out the action and replaced it with strategy role-playing. The game is still set in the R-Type universe, but this time your planning is more important than your power-ups.

These days, the “in” thing to do is reinvent older, established game franchises, using their name power to reel in gamers that remember the original. And why not? It works for Hollywood! But does it work for R-Type Command? Is this a good strategy game in its own right? Or is it just cashing in on the R-Type name?

Hit the jump to read our review on R-Type Command.

R-Type Command (PSP)
Developed by Irem
Published by Atlus
Released on May 6, 2008

Even though Command is a departure for the series, it manages to say true to its roots in several ways. Visually, this game looks like an R-Type title, complete with all the dark, futuristic imagery of the classic shoot ’em up. Most of the game’s maps scroll from left to right, though you’ll be moving much more slowly than you used to in the previous titles. You’re still fighting the Bydo, using awesome weaponry, and occasionally fighting some epic bosses. Best of all, the Force (attachable ship power-ups created from Bydo technology) can still be equipped. Trust me: the Force will save you time and time again. They also make great tanks.

And of course, the series’ hallmark difficulty is still here. Even though you can now take your time to plan each enemy encounter to perfection, you’ll still get your ass handed to you in classic R-Type style. Save, and save often! 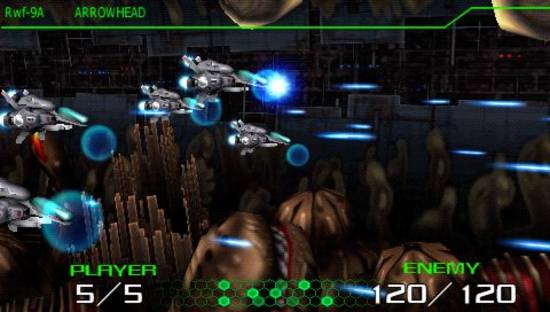 The story in R-Type Command is also pretty similar to past series’ games: it’s one man against insurmountable opposition. This time around, you’re a lone Commander, ordered by the Space Corps to take what’s left of your forces and fight off the Bydo, as they’ve managed to infest the Solar System. After only a couple of training missions, you’re dropped into battle with these Bydo, with only a small, underpowered crew and little to no help from the Space Corps.

Under it’s future space battle exterior, R-Type Command is a classic tactical strategy role-playing game. As the Commander, you move each ship in your armada across a hexagonal map, carefully managing your resources while planning your attack on the enemy forces. Much like any other strategy title, the varied units all have a range of strengths and weaknesses. In between battles, you can visit R&D to develop units using resources you’ve uncovered during battle. Mobility, attack range, terrain and all the other SRPG staples all play a role in Command.

What’s not typical of these types of games is how Irem implemented these strategy RPG staples into the R-Type world. Don’t expect to jump into R-Type Command without learning what each unit does and succeed. It’s all mixed up from the tried-and-true SRPG formula, and there’s a bit of a learning curve. For example, you still have long-range weaponry, but you may have to charge it up first (fans of the shooters will remember doing this). Units that have high mobility may also have a higher fuel expenditure for you to keep an eye on. You’ll also want to keep an eye on your ammunition, as just about every type is limited as well. And the many obstacles of the terrain of space makes for a much more interesting playing field than the “oh, there’s a mountain I can’t go over” of typical SRPGs. 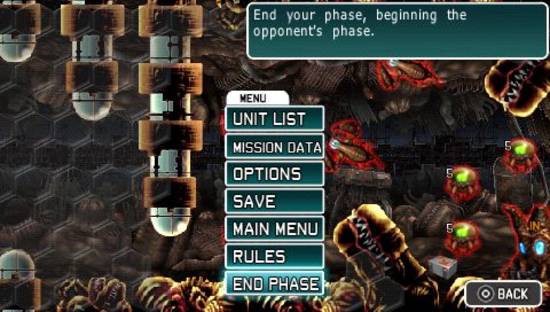 What makes R-Type Command great is the gradual evolution of power and confidence as it draws you into the story. It slowly builds you up from an scared rookie to a powerful Commander of a massive armada. New technology, techniques, and power-ups are gradually introduced, and depending on how well you play, you’ll acquire the manpower to use these new abilities. And Command doesn’t do you any favors. Expect to restart battles after multiple defeats, but know that each time you do, you’ll be armed with a bit more power and knowledge than the last battle, and that eventual victory will feel really good. I lost twice on the first training mission, and three times on the second one. But the techniques and strategy I learned from them prpared me for much more difficult battles ahead.

While “tough love” is always appreciated, the sometimes unnecessary difficulty caused by the “Fog of War” isn’t. This Fog of War refers to radar range. As each ship’s radar range varies, your visibility of the enemies in a map is often limited. I suppose this was included to add a bit of a twist to classic strategy, but most of the time it just seems unfair. There’s a specific unit you can deploy that has an extended radar and excellent mobility, but as you’d guess, this ship is pretty weak to enemy fire. This means that you’ll see the first batch of hiding enemies, but when that ship is downed, you’re probably screwed until the end of the battle — if you make it that far. It’s pretty frustrating to move your single unit into “unknown space,” only to find a horde of Bydo waiting there, ready to attack.

There are also some silly restraints on weapon use in some craft. For example, all of the ships with a charging attack seem to be stuck in their classic arcade roots; they can only fire from left to right. That’s right: they can’t turn around to use their most powerful attack. In some later battles, you’ll find yourself at a serious disadvantage when you are encountered from behind. 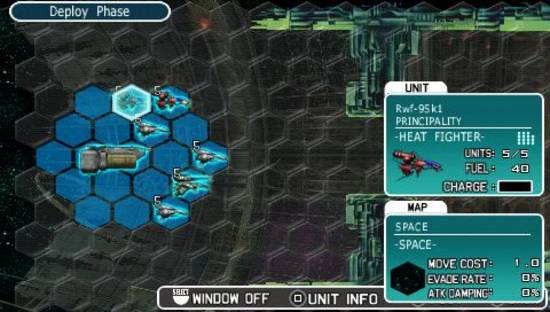 There does seem to be a definitive hump that is overcome after several battles. When the learning curve is behind you, and your confidence is finally there, blazing through battles is easy. With all the options shut off, and a little skill under your belt, it seems easier to fly across the hex-grid and demolish enemies, and the action becomes fast and addictive. I can’t tell if it’s because the game becomes easier, or that I just became better at this game’s strategy, but after 7 or 8 missions, I felt like I could take on anything.

The presentation of R-Type Command is especially nice; there’s a lot to appreciate while you ponder your next ship placement. The game opens with a pretty slick CG cutscene that follows some allied ships through Bydo-infested space. In battle, they attempt to keep a running theme going with the occasional animation of your skirmishes. They always look great, but they’re slow-loading and somewhat annoying in the midst of a heated battle. Thankfully, you can opt to shut these animations off. The maps are all visual treats, spanning from asteroid-heavy open space to dark, confined ruins. Debris floats by in the background, and glimpses of upcoming enemies are often hinted at in the distance. The music is mostly good, though it comes with the looping you’d expect with 30+ rounds of strategy. There is some variation, and you’ll love with the “you’re going to win” song comes up near the end of a difficult battle.

I didn’t have the chance to try what is probably one of R-Type Command’s cooler features: the ad hoc VS. mode. Atlus only sent one copy of the game, and the VS. mode requires two copies. I do know that each completed battle in the single player mode opens up that stage for future head-to-head skirmishes. We’ll update this review after we’ve had a chance to give this mode a spin.

While there’s no shortage of tactical strategy role-playing games on the PSP, they’ve all begun to look similar to each other, and variety and challenge seem to be scarce in these games as of late. Thankfully, Irem made Command to live up to the R-Type name as far as challenges go, and the inclusion of innovative space twists is a breath of fresh air for this genre on the portable. In the end, completion of a stage in R-Type Command is every bit as rewarding as it was in its shoot ’em up predecessors, but without the painful hand cramp. Give your trigger finger a rest and pick this title up.

Score: 8.5 (Great. Very fun — its essential gameplay aspects are cool and interesting, but may not be implemented in the best way.)

[Update: Thanks to Atlus, we’ve now had a chance to try out the multiplayer features of this game. I enlisted a friend to go head-to-head, as a new player, with my fully experienced fleet. Needless to say, I won. But we had a good time regardless.

Multiplayer plays almost exactly like the single player does, though you now have someone to scream at when you lose your best fighter. The action was quick, lagless, and engaging. My friend played as the enemy Bydo, which enabled him to heal in between rounds. I still blasted him to pieces!]