[This is just one of the new games available in The Orange Box. Don’t forget to read our reviews of Episode Two and Team Fortress 2, and keep your eyes peeled for forthcoming console reviews.]

It’s no big secret that I’ve been eagerly awaiting Portal since its initial announcement long ago. When I finally got my hands on the game at E3, it was plain to see that Valve had created something special; manipulating the portals by way of the Aperture Science Handheld Portal Device got me into a whole new mode of thinking. I found myself reevaluating common conventions of first-person titles and had to shake a lot of old habits. Like a drug-addled hippie, I walked away from the game spitting at my colleagues and muttering nonsense about motion and space. These mutterings, naturally, were deftly ignored.

Getting my hands on the game proper was like an extension of the aforementioned acid-esque experience. It was incredible, it was gripping, it was a promising new addiction, it was — over?

Ever seen “Cube”? We were made to watch it in my Canadian Literature class, the last literature course I took as part of my English major requirements. I had seen it before, but not in such a way where I was expected to, y’know, think about it. From the film we were supposed to cull some sense of Canadian identity or aesthetic, but I struggled — all I could see was a bunch of anxious folk stuck in a deathtrap and killin’ eachother slowly. Thinking about it academically gave me a nosebleed.

Having endured the film in such a way, you can imagine how warped my fragile li’l mind was going into a game like Portal. Incorporating the same sterile, clinical sort of aesthetic and limited understanding of the circumstances surrounding the character’s involvement in the Aperture Science Enrichment Facility’s testing program, this was a game that I knew I was going to overthink. The constant disorientation of moving through portals into different parts of a map where my view has to adjust to compensate for the new direction of Goddamn gravity doesn’t help, either. Fortunately, there’s quite a bit in Portal to overthink and dissect.

Dumped into small quarters containing little more than a toilet, a sleeping pod, and a radio, the player isn’t given much information as to what exactly is going on in Portal. The vaguely feminine mechanical voice of GLaDOS, the only other character in the game, rings out over intercom and informs you that the test has begun. Nineteen test chambers to acclimate you to the use of the portal gun await, along with some… less than desirable consequences should you fail. And that’s it. You’re off. 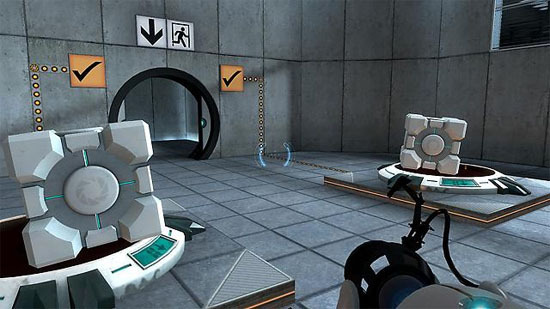 The mechanics at work in Portal‘s gameplay are similarly simple. Once you pick up your Aperture Science Handheld Portal Device (zee gun), you have the ability to plant a portal on any flat plane available to you, with some exceptions. Certain walls and floors can’t be portal’d (usually those which are darker or textured in particular ways), and any planted portals will dissolve the moment the player passes through certain fields. Though these restrictions might sound stifling on paper, there’s actually quite a bit of freedom to be had once you’re granted use of both orange and blue portals. Your weapons are your portals, weighty objects like storage cubes, and your mind. No guns, no explosives, no nothin‘. Just you and your portal-slingin’ device.

Portal includes nineteen test chambers, the first 13 or 14 of which you’ll blaze through in less than an hour. Designed to acclimate you to the subtleties of portal-based gameplay, these initial chambers are almost embarassingly simple. The final five chambers will be where you spend most of your time, and demand a good two and a half hours versus the preceeding 14’s thirty-plus minutes. Once things get rolling you’ll be doing some truly amazing stuff with your portal gun, particularly with the momentum puzzles — using gravity to slingshot yourself out of a portal at high speeds. The puzzles demand not only a keen eye for solutions but a quick finger in pulling them off, confirming Portal‘s “action-puzzler” status. Perhaps most noteworthy about the game in this respect is the way it gets you to really think differently about a level; like Crush before it, Portal demands review of how we associate with level design, particularly the first-person variety.

The game is short, though — almost cruelly so. It spends much of its content just getting the player rolling, and while the remaining puzzles do take a bit of time to complete (particularly the last — I’ll say nothing, but trust me, it’s the bulk of the experience), I was really hoping for more time to screw around inside the testing facility. Once the game is completed you’re granted access to “advanced” versions of some of the levels, which are frightfully difficult and should take a bit of time to work through. Portal‘s brevity will hopefully be remedied by future map expansions and additional content, but for now the game feels just too short. Hopefully we’ll be seeing some exceptional user-created content in the near future. 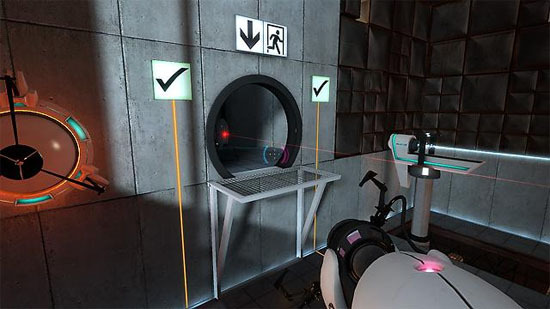 Valve’s trademark storytelling makes an unexpected but undoubtedly exceptional appearance in Portal. It’s a hilarious game, chock full of some of the darkest humor I’ve ever seen. GLaDOS, the mechanized voice which reports on your progress and offers backhanded pick-me-ups and promises of cake at the test’s conclusion, is the source of just about all of it. She’s condescending and mockingly bureaucratic; her lines begin with an informative tone and become more sinister and malicious as the game goes on. By the game’s end you won’t be able to imagine Portal without her voice ringing in your ears, and the credits solidify GLaDOS as one of the best antagonists to appear in a game in ages.

Though the game itself is remarkably sparse in exposition and environment design (again, sterile and clinical testing facility), there’s a surprising amount of context and story information to be drilled. I won’t say much, but there are moments — you’ll know them when you see them — that the environment makes huge reveals about what’s going on at Aperture Science. Though the game itself is heartbreakingly brief, Portal adds a great deal to the Half-Life universe thanks to these particular moments, the game’s conclusion and GLaDOS’ contributions to the narrative. This brand of storytelling is uniquely Valve’s.

Portal is a fantastic game and well worth the price of admission, particularly for those netting the title as part of The Orange Box. Valve has put together a remarkable title with intriguing and ultimately rewarding gameplay as well as some of the funniest writing in gaming today. But much like GLaDOS, Portal might strike some as huge tease — an insanely promising play scheme cut short by criminally brief length. If the game was miserable this wouldn’t sting so badly, but unfortunately for Valve Portal is one of their most brilliant titles among a catalog of brilliant titles. Buy it, play it and pray for map expansions.

[Look at me still talking while there’s science to do!]