Hey, you. You like dropping blocks? No, not on cats, on other blocks, thereby eliminating blocks en masse. Yeah, like Tetris, but not quite like Tetris — this is Planet Puzzle League, and it’s a damn fine example of what a puzzle game should be. At least, we think so.

If you’re not already a Panel de Pon convert, you might be wondering exactly what you might be offered by a game like Planet Puzzle League. In the latest Destructoid review, Chad, Nick and I will do our best to convince you, all without the threat of force! Now hit that jump and read up on what could very well be the best DS title yet in 2007, or I’ll break your Goddamn legs.

Updating a classic puzzle game can be a tricky process. Change or overhaul too much and the game evolves into something quite unlike its predecessor, which could potentially scare away faithful audiences (Tetris 2). Release the same ol’ game over and over, on the other hand, and you risk sterilizing your franchise with a series of ho-hum ports. For Planet Puzzle League, the latest update of the classic Panel de Pon puzzle series, Nintendo took the trail blazed by last year’s phenomenal Tetris DS, and the result is nothing short of spectacular.

You may have already encountered Puzzle League once or twice before in its previous stateside incarnations. If your first experience with League (known in mother Japan as Panel de Pon) was on the SNES as Tetris Attack, you already know that the game is a far cry from its previously tacked-on namesake; Panel de Pon is a gravity-oriented block puzzler, sharing a few more genes with Columns and Bejeweled than with the Godfather of puzzle gaming. Blocks rise up from the bottom of the field in five different colors, and must be shifted in pairs and set in horizontally- or vertically-aligned strings of three or more to be cleared. Once the blocks are cleared, the blocks above cascade into their place, creating the opportunity for chain combos. That’s the basic gist of it, but thanks to the magic of player intervention, things can get a lot more complicated.

While the blocks clear in Panel de Pon, the player can switch blocks into place beneath, around, or above them to achieve bigger and longer strings of chain combos. To watch a skilled player go to town with a chain combo is really a thing of beauty — it’s a combination of planning and quick reflexes, and not unlike watching a player really rock, say, Street Fighter III: 3rd Strike. It’s– oh, hell, I’ll show you.

The chain combo aspect of gameplay in Planet Puzzle League is what really sets it apart from most of the other Touch Generations games (Elite Beat Agents notwithstanding). League can be enjoyed by most anybody who can count to three, and can be played simply and slowly — single- or double-clears for the most part. For those gamers looking for a bigger challenge, Panel de Pon  offers fast-paced combo play like the video above, making this a must-have package for casual and hardcore puzzle gamers alike.

New to this latest installment of the series on the DS are a variety of upgrades that mark Planet Puzzle League as the best yet. As you might suspect, internet play over Nintendo WFC is a big plus, though marred by the traditional hangups of Nintendo’s maligned online strategy — oh, friend codes, how I loathe thee. Random matches in the form of Free Play Battle and Birthday Battle always serve up good fun, however, even if it’s served in a weird sort of way. At first glance you might suspect, as I did, that an unusually large number of players share your birthday (mine’s December 10th, send money), but the name’s misleading. Birthday Battle is just a stupid name for a ranked battle, in which players are ranked against other players sharing their birthday based on win count. Newbies can test the waters in Novice Battle, which will go dark after winning a handful of rounds — a great way to get a feel for the online game without getting your spirit stomped by any mutant 1000-win players.

Also of note is the inclusion of the vertical/stylus play, in which the player holds the DS in a book orientation (see Hotel Dusk, Brain Age) and shuffles blocks on the touch screen with the stylus. For those players who have been playing Panel de Pon with the directional pad for the better part of the decade, this can be a little disorienting at first — especially online, where lag can leave you wondering just where your cursor got off to — but once you get used to it, it’s an invaluable way to play. Stylus-based play allows for faster shuffling, which means it’s easier to slide those blocks into tighter spaces on the fly — a must for the big ten-plus chain combos.

Single player retains most of the basic modes you’d expect with a couple of twists. Six modes in total are at your disposal: Endless, Clear (get the blocks beneath a certain line), Garbage Challenge (shoot for high scores while clearing huge, row-spanning block-chunks), Vs. COM, Time Attack, and Puzzle (clearing blocks in a set number of moves). Endless is easily the most hypnotic — one of my Endless rounds lasted 55 minutes — but there’s plenty to do in League‘s single player and there’s bound to be something that will hook you. One of the more cerebral modes is Lift Attack, in which you have to see how deep you can go in two minutes — it’s not about score so much as it is about the height of your stack, sort of like Mr. Driller.

Additionally, League takes a page from Brain Age with its Daily Play mode, which allows you to play one of three modes (Score Attack, Garbage Attack, Lift Attack) for two minutes once per day. After each play, your score history is displayed in a graph, giving you an idea of your skill development. It’s a really nice touch, especially for those looking to improve their style of play.

Aesthetically, Planet Puzzle League can stand on its own two feet, even without the bright-and-shiny rebranding of previous stateside Panel de Pon localizations like Tetris Attack and Pokémon Puzzle League. Sure, there aren’t any familiar characters bubbling ’round the place to make you forget you’re playing, y’know, a puzzle game, but PPL is pretty in its own right. In vertical mode, the field of play is displayed at a higher, clearer resolution which really showcases the colorful block skins (7 in all) and stage backdrops (10 total). Some of them are uglier than others — doubly so for one in particular — but it won’t be long before you find your favorite and stick to it. The combination of music, backdrops and block patterns doesn’t quite have the variety that a game like Lumines brings to the table, but there’s just enough to keep things from getting stale. A strong effort that could’ve been just a wee bit stronger.

I can’t recommend this game enough to anybody who loves puzzlers — hell, even to those who don’t. For the uninitiated it can be a slow, methodical exercise, and for us veterans it’s like some bizarre hybrid of action and puzzle gaming — the pace is determined by the player. For these reasons Planet Puzzle League is a terrific inductee into Nintendo’s Touch Generations series and just a damn fine addition to your DS library. Don’t miss this one for nothin’. 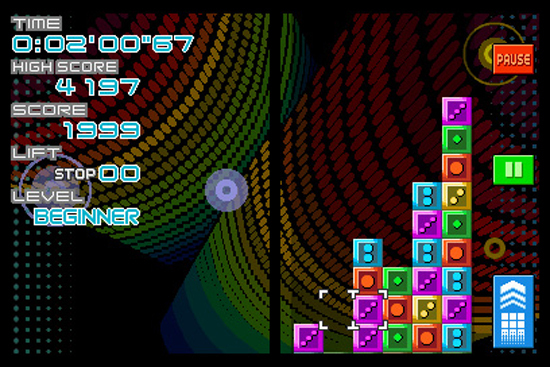 Aaron’s glowing (bordering on psychotic) praise of Planet Puzzle League might seem a bit over-the-top, but let me assure you this: it is entirely warranted. As a huge fan of all things Panel de Pon related, outside of Nintendo replacing all of the game’s assets with offensive imagery of my mother, there was no way I was not going to love this game. But I was still floored, because the game’s developer, Intelligent Systems, have created the ultimate version of what was already one of the best games in the genre.

Traditionally played with the d-pad and buttons, the game implements touch screen controls that not only change how the game feels, but how the game is played (note that the game can be played traditionally, as well). The game’s core mechanics will feel familiar to anyone who’s played previous iterations of the title, but the “touch and slide” controls make it feel remarkably similar to another DS puzzler, Meteos. However, Planet Puzzle League feels less arbitrary and free than that title, with chains and combos that any player with a keen eye and fast reflexes can rock with a little work and patience.

While this DS version does seem to be the definitive version of the title (with Wi-Fi play, as well as a wide variety of modes), I was surprised to find myself missing its tie to a license. With Tetris Attack, Nintendo’s Mario universe was used liberally throughout the presentation, and even the Pokemon franchise gave the game life and character on the Game Boy Color and Nintendo 64. Planet Puzzle League‘s presentation (like all things in the Touch Generations line) is polished and sleek, but at times it tends to feel cold and lifeless. I find it hard to swallow that a game like this has to take itself so seriously, even if it is trying to appeal to a mass audience.

But in the end, the game doesn’t really need a known license to give it legs. Planet Puzzle League has established itself as one of the best puzzle games in the world of videogames, and it’s one of the best games on the Nintendo DS. Period.

Yay, Nick and Aaron, I want to hop on the “gushing over Planet Puzzle League” bus as well! Next stop, repetition!

All points made across the board I completely agree with: the new touch screen controls are implemented perfectly (the d-pad is so 2002!), the new gameplay modes are unique takes on old favorites (Daily Play is easily the best new addition), and, unlike Nick, I really feel the game benefits from its clean, polished, mascot-less presentation.

What blew me away the most about Planet Puzzle League, however, was how addictive it turned out to be. I don’t know why I was so surprised by this: Tetris Attack for the Super Nintendo (another member of the ridiculously gifted Panel de Pon family) is was, hands down, my favorite puzzle game of all time, so, needless to say, I pretty much knew what Planet Puzzle League was going to offer before even turning the game on.

But who knew taking a classic puzzle game formula and combining it with the accessibility and expanded multiplayer base of a Wi-Fi enabled handheld would produce the best version of Panel de Pon yet? Seriously, I went back to play Tetris Attack after playing Planet Puzzle League for hours (upon hours) and there really is almost no comparison; the frantic, combo-heavy action and short burst gameplay just feels so much better (and is infinitely more satisfying) on the Nintendo DS.

Needless to say (and without trying to sound like a broken record) Planet Puzzle League really raises the bar for the genre by offering a near-perfect puzzle gaming experience (I can’t give a 10 to anything with friend codes – sorry, Nintendo). Everything the game does it does very, very well – a truly fun, rewarding experience that any DS owner should not pass up. 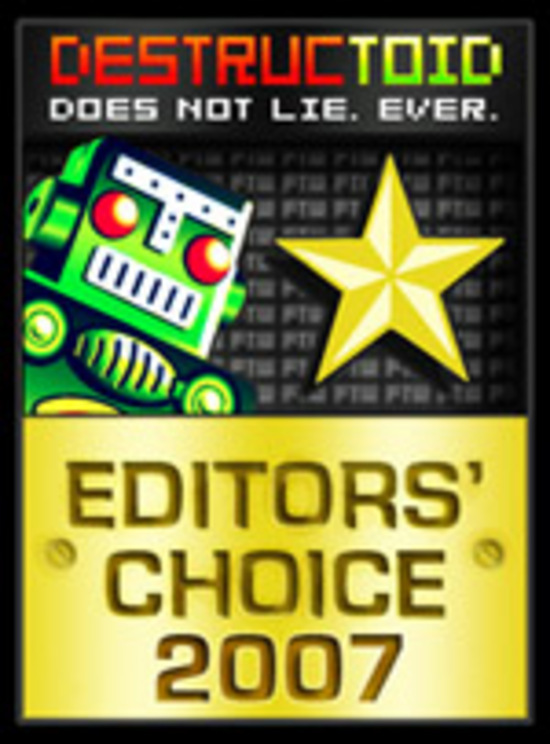