Developer Blazing Lizard has had Pirates vs. Ninjas Dodgeball cooking for a while, and has cleverly exploited the Internet’s memetic fascination with pirates and ninja to ensure that the game would get at least glancing coverage at regular intervals.

Internet memes can only get a game so far (just look at Jeff Minter,) and now that this Gamecock-published title is available on Xbox Live Arcade, we can judge for ourselves if there is a solid game backing up the pop culture pandering. It’s gotten some mileage out of its novelty value, but how is Pirates vs. Ninjas when put through its paces? Is it a bottle of rum or a bottle of piss? Is it a katana, or a Daikatana? Read on to find out, as we review Pirates vs. Ninjas Dodgeball. 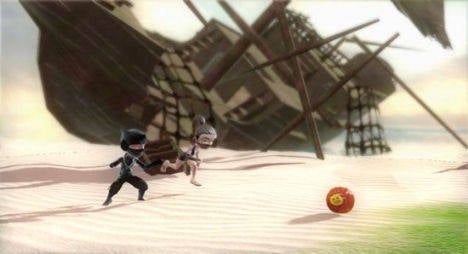 Pirates vs. Ninjas is incredibly simple, both in terms of gameplay and premise. There is a ninja clan and a pirate band, and they choose to settle their differences with dodgeball. That’s about it, really. Zombies and robots are also thrown into the mix to ensure maximum pop culture exploitation, and there is an attempt at a story mode, using text between matches that occasionally raises a weak half-smile, but consistently fails to interest. Basically, the whole game is one big Internet joke that Castle Crashers did better in a single level of its 20 stage campaign.

The gameplay matches the concept in terms of simplicity. Choosing from either the pirates or ninja (and later zombies or robots), you can play with teams of up to four players a side and partake in some shallow dodgeball action. Each team starts on one side of the map while a number of balls drop from the sky. From there, your aim is to grab the ball and lob it at your opponents until they run out of energy and your team is left standing.

The ball is collected simply by running over it, and can be thrown with the X button. A held ball can be thrown either by running and chucking it in the direction you’re headed, standing still to get a more accurate aim, or jumping and throwing in order to get a more powerful shot. You can fire super charged shots, use the right analog stick to dodge, and enemy balls can either be countered, caught, or knocked out of an opponent’s grasp with a dizzying melee attack. There are also special abilities for each playable character which can be activated by a button press and range from simply attacks like a power smash that dizzies enemies, or an obscuring cloaking device. 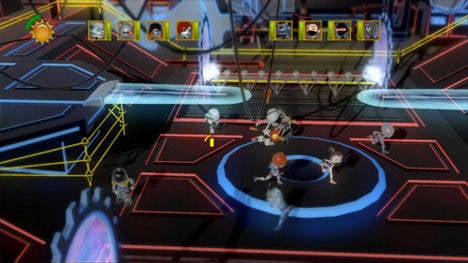 That is pretty much all Pirates Vs. Ninjas has to offer in terms of gameplay, and you can get to grips with the whole thing in five minutes. Incidentally, that’s the same amount of time it takes for you to get bored. Sadly, the game is simply not fun in any way, and is nowhere near as silly and chaotic as you’d expect a game with Pirates vs. Ninjas in the title to be. It promises comical sporting nonsense, and delivers a dull and emotionally flat experience that makes you wonder why Blazing Lizard even bothered.

It’s not so much that the game does anything that terrible, but it doesn’t do anything very well, either. The game is presented poorly and the camera can zoom out to a ludicrous degree considering the small and nondescript character models. It can be difficult to see where the balls are or even which characters are on what team. From so far away, the generic deformed models running aimlessly around onscreen could be a pirate, a ninja or Bret “The Hitman” Hart for all you know. Add to that the dodgy targeting, unwieldy character handling and the game’s need in some matches to take control of your avatar and force it to run back to its side of the pitch (also leaving you helplessly open for attack) and you have a game that lends itself well to frustration. 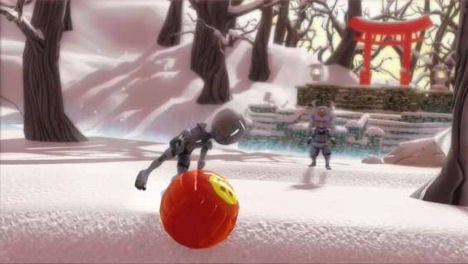 Dodgeball offers several modes, including the aforementioned single player campaign which I recommend avoiding entirely, thanks to a pathetic ally AI that is only good at losing incredibly quickly on the hard stages. Of course, multiplayer is where it’s at and this is clearly designed with the party game experience in mind, but we already have far better party games that render Dodgeball completely obsolete. If you need Pirates Vs. Ninjas to have a good time then I suggest suicide might be a more entertaining activity at your next social gathering.

I would love to talk about the online multiplayer experience, but this is an Xbox Live Arcade game, so you already know what that experience is like. It’s the same as Streets of Rage II online, or Smash TV online, and it goes like this:

There is music in the game, and it has graphics too. Neither are really worth much more discussion than that because they’re so memorable I’ve forgotten them already. 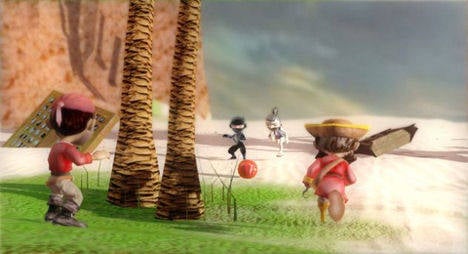 Ultimately, Pirates Vs. Ninja Dodgeball is a waste of time. Beyond its “clever” cultural references there is nothing that this game has to offer anybody with even a passing interest in videogames. There are better party games and there are better sports games, making Dodgeball nothing but a forgettable irrelevance. Following weeks of excellent titles on the XBLA platform including Geometry Wars 2, Braid and Castle Crashers, Pirates Vs. Ninjas Dodgeball looks like nothing but a rather crude and unfunny punchline to what was a superb run of downloadable games. You don’t need this excercise in mediocrity.

Score: 3.5 (Bad. Some aspects are terrible, others are either so-so or kind of fun.)