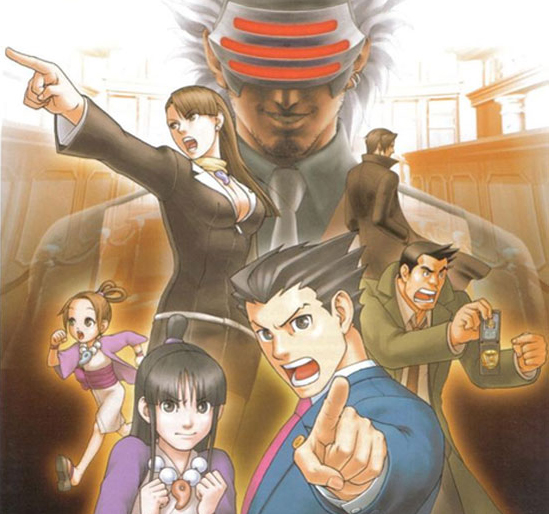 If you’ve followed the Phoenix Wright series since day one, you’ve surely had the pleasure of steering the future of many a court case (not to mention enjoying the wit of one of the best dialogue-driven series since the days of Lucasarts.) Trials and Tribulations is the final chapter in the popular trilogy starring Phoenix Wright, a hotshot attorney who was still wet behind the ears when the series began.

Hit the jump to find out why Phoenix is in the witness chair this time around, who the hell Godot is, and why a game can get away with a supporting character who openly talks about his hemorroids and can still keep you laughing.

For those of you not already familiar with it, a bit of quick backstory: Phoenix Wright is more or less a point and click animated text adventure. You play the role of Phoenix, an attorney who’s climbed up the rungs of the law system in the first two installments of the title. Trials and Tribulations takes you back to the early days of Phoenix’s career. Not only do you get to prod into Phoenix’s past, but we also get to meet new characters, including a mysterious new prosecutor named Godot who seems like a cross between an anime villain and a control freak.

Your opening case actually allows you to play the role of a young Mia Fey, defending a young and nervous Phoenix Wright from accusations of murdering the ex-boyfriend of his current girlfriend,  Dahlia Hawthorne. It’s up to you to peer beneath Dahlia’s wide-eyed sincerity to see if anything dark lies beneath. It’s fun to see these well-known characters in a different time in their lives, but the structure of the cases is what you’ve come to expect if you’ve played past Phoenix Wright titles.

While the game’s writing is top-notch as always, I felt this chapter of the saga was a little bit of the same when it came to the use of the characters. When the characters are charismatic and well developed, they work wonderfully (Pearl and Maya definitely fit the bill.) On the other hand, Larry Butz can only pull off the bumbling moron act for so long, and seeing a character tried for murder in the last game reappear to be tried again didn’t ring fresh.

I love the style of the Phoenix Wright titles, and this one is no exception. The characters are clean and colorful and look as if they could have stepped right of a panel in a comic book. By having such a unique look, it’s easy to get wrapped up in the story and find yourself donning your detective hat. Every time there’s an objection called, I still laugh aloud at the voice. I wish I had the guts to scream “OBJECTION!” into my DS, but so far I’ve avoided this in public as not to look as if I have Tourette’s Syndrome.

The music is also wonderful, giving the extra detail to each character that makes them even more memorable. For some reason I’m reminded of the Kemco NES games like Shadowgate and Deja Vu — even though this game is obviously more advanced than those, the music makes the setting complete. This series also convinces me that everyone in real life needs a theme song. They’re just so telling.

In addition to the game’s usual processes of searching for clues and presenting them to witnesses to extract more case information, Trials and Tribulations brings back psyche locks, which can only be broken by accumulating a certain amount of evidence. It adds a bit more to the gameplay and makes the player feel as if they are working harder to “break through.” I really liked this feature a lot, but it felt a little like retread from the last game as well.

While some of the game mechanics do feel like retread, overall the game is a solid experience and definitely keeps with the tradition of making the modern point and click adventure fun and accessible again. Just like the past Phoenix Wright titles, the dialogue is top notch as always. It’s still a ton of reading, so newcomers beware. If you weren’t a fan of the heavy dialogue in Super Paper Mario, then you’ll find no enjoyment with Phoenix Wright.

If you are a fan of the series, Trials and Tribulations should not disappoint. It’s a solid resolution to the Phoenix Wright storyline, and it should be an enjoyable gaming experience. However, if you have never played the series before, I would warn you to steer clear of this installment. The characters and their present positions will be much less resonant to you if you haven’t gotten to know them in the first game. If you’re interested, start with the first game. It’s been re-published, and should be easily accessible.