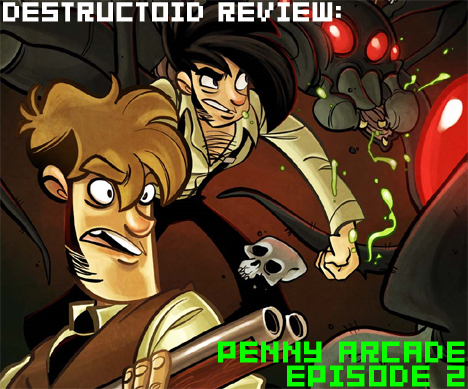 When Penny Arcade Adventures: On the Rain-Slick Precipice of Darkness Episode One was released, I eagerly gobbled it right up. It was brash, absurd and hilarious, exactly the sort of lampooning that I feel many RPGs which take themselves too seriously deserved.

This week, Episode Two made its way into our clammy, grubby hands and I was eagerly looking forward to the opportunity to return to the world of New Arcadia. Could it live up to the precedent set by the launch of the series? Now that I’ve had the opportunity to spend more time with John Gabriel and Tycho Erasmus Brahe, I’m ready to tell you. Read on to find out. 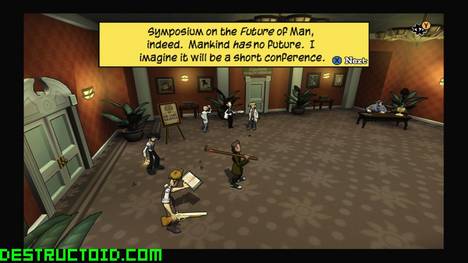 Penny Arcade‘s story picks up more or less where the last episode left off. The giant Fruit F*cker is still on the loose, with Gabe and Tycho hot on its heels. The best lead they have lies with a man determined to have invented the prototype for these infernal devices, a scientist named Crozier. Unfortunately for our heroes, his current address is the Cloying Stench Sanitarium.

Very little is provided in the way of exposition here. While I personally can’t imagine newcomers arriving in the second installment, those who would choose to do so will likely miss many references to past events. Any allusion to what has come before is glossed over in the most perfunctory way. It’s perfectly playable without prior experience but it would provide the player with an inadequate picture of the New Arcadia setting and the characters who populate it. 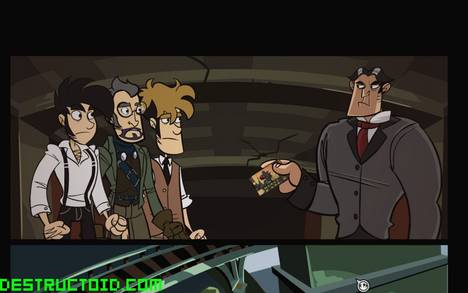 Events in Episode Two are considerably less absurd than in its preceding game, which is a bit disappointing. The plot feels much more pedestrian and, while there are moments of creativity that border on baffling, things never get quite as strange. Holkins’ writing is often very good, but the dialogue and descriptions often lack the same punch they did last time and rely a bit more on expletives to carry the humor.

Puzzles were pretty few and far between last time around and an effort has been made to introduce more of them. While there are certainly some fetch quests at work, there are a few instances where you will be expected to give a bit of thought to what you are doing. As before, none are exceptionally difficult to figure out but they are pretty clever at times. 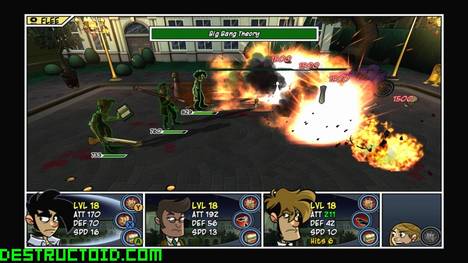 Just as in the previous installment, combat is akin to an Active Time Battle system. Each of the three characters has three meters that fill over time, giving access to their abilities. Item use fills up first, followed by a basic attack and a special attack. A special attack will launch you into a character-specific mini-game to attempt to maximize the amount of hurting it inflicts. When two (or all three) characters have filled their special attack meter, they can (sans mini-game) execute a devastating team-up attack for massive damage on a single foe.

The mini-games are improved upon a fair bit, especially Gabe’s. What was previously a pretty dull exercise in button-mashing has become a timing game with commands that must be executed within a small window at an increasing pace. Your character’s game involves pressing a button when an spinning arrow lies within a target area, whereupon it moves back in the opposite direction towards the target on the opposite side of a dial and accelerates in speed. Tycho’s remains largely unchanged, apart from a shooting range aesthetic.

This system worked well in Episode One and it remains largely unchanged here. Enemies still have assorted resistances and weaknesses to assorted forms of attack. There are a couple of new items to meet the higher hit point counts of enemies (which are matched to your character’s level fifteen beginnings) but, as before, you probably won’t have too much need of them to complete the game at its base difficulty. 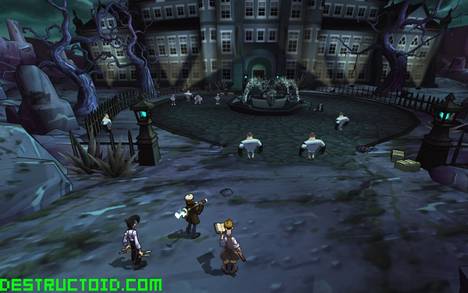 The enemies itself are what I have a problem with. They suffer from the same issue that the story itself does. Gone are the mimes, hobos and talking trash cans which were so charming the first episode. They’ve been replaced by asylum patients, wealthy aristocrats and other manner of common, boring foes. They’re really quite disappointing by comparison.

For those who found the first game to be a little too easy, additional difficulty settings have been added to this installment. Difficulty can be changed at any time from the pause menu. The default level feels even easier than the previous time around, so gamers looking to challenge themselves a bit may want to kick things up a notch if they find themselves getting bored.

After completing the game, a brutal, “Insane” mode unlocks. Success on this difficulty requires mastery of counterattack timing, as the most basic of enemies can dish out considerable damage even when blocked. Item use also becomes a necessity and the whole affair is far more strategic in nature. Insane mode demonstrates a depth of combat that the standard game fails to convey simply by providing a need for all of the tools at your disposal. 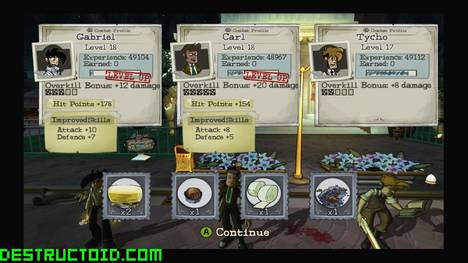 New features are somewhat minimal, but useful. The Startling Developments office now has costumes available on the coat rack which convey bonuses. Of the three, one is only available to players who have completed Episode One while a second is earned during the course of the game. The final outfit can be acquired from chests littered through New Arcadia, chests which will only open in Insane Mode, giving a reason other than masochism to attempt the feat.

Another handy addition is a checklist that allows you to follow your progress. It keeps track of statistics such as total number of kills, overkill bonuses earned and collectibles acquired. Nearly all of the information it provides can be found elsewhere, but it makes for a good quick reference as you hurtle towards the inevitable conclusion to make sure you haven’t missed anything.

The best new feature, however, is the ability to select from multiple environmental objects to interact with. When you are standing in the vicinity of more than one person or object, you are given the option of cycling through them and select the specific thing you want. This is incredibly useful, as it prevents you from inadvertantly inspecting something you’ve already seen and allows the designers to cram in even more stuff to check out. 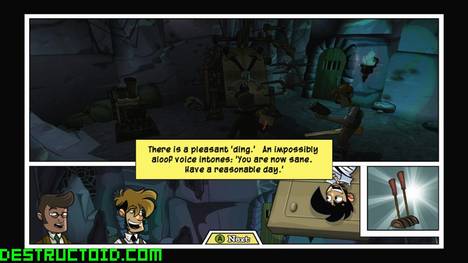 While On the Rain-Slick Precipice of Darkness Episode Two makes for a better game in the technical sense, the somewhat ho-hum story drags it down. It’s still a good game but falls a bit short when it comes to the elements which made the first so entertaining. It’s a bit early to conjecture that the team may be running out of steam and I’m still hopeful for the future of the series but this is not as strong of a release. Let’s just hope that Episode Three makes a better effort.

Score: 7 (7s are solid games that definitely have an audience. Might lack replay value, could be too short or there are some hard-to-ignore faults, but the experience is fun.)