The point is that I’m not doing any of those things, and the reason is almost as simple as the distraction: I’m busy playing Peggle.

Last week, PopCap debuted their pseudo-casual puzzler on Xbox Live Arcade. It’s everything you remember, and then some. This release has multiplayer. And I’ve been playing. A lot. 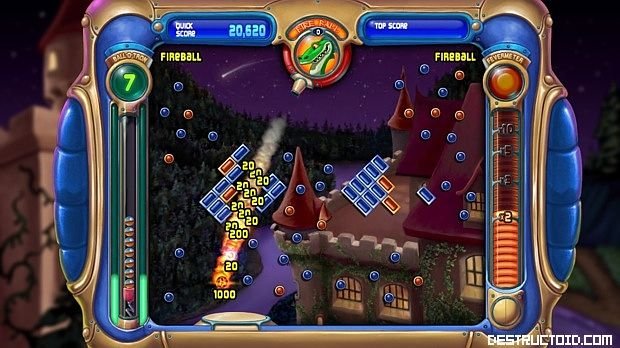 Go ahead and cheer — Peggle translates to a controller. The venerable PC pseudo-casual title has made various platform hops with great success, and this time is no different. The magic and addictiveness are still intact. Just ask my copy of Resident Evil 5. She’s been largely idle since release night, waiting for me to pop her in and bring down the house with a marathon session of Mercenaries Mode. I can’t bring myself to do it, though, because I’m too busy clanking balls against orange pegs.

The reason why I traded snuffing zombies for an Internet-ancient puzzle game is clear to me now: Peggle has depth. As I expounded in my Peggle Nights review, there is a glorious amount of complexity within the game’s simple, quirky packaging. You don’t have to find it; it comes to you after hours of play.

Let’s hit the basics of the title first.

The goal of the game is simple: clear all of the orange pegs in a level by hitting them with a limited amount of metal balls. You shoot metal balls out of a centralized cannon and send them tumbling through an environment of multi-colored pegs and various themed obstructions. It’s sterile gameplay — as simple as hurdling barrels and climbing ladders in an attempt to reach a princess.

The depth comes from successfully utilizing the tools laid out in front of you. Green pegs allow you to utilize an avatar’s special power, granting a special ability that often cuts swathes through numerous pegs with one basic button press. Purple pegs give you points, which, in turn, can give you extra lives. A roving bucket at the bottom of the screen does much the same, but if you miss it, you lose a ball. Winning and losing is a matter of understanding the game’s physics, aiming precisely, effectively managing the special pegs, and having a willingness to trade reason for chance, since a whimsical shot often yields spectacular results.

Peggle has four basic single-player modes — Adventure, Challenge, Peggle Masters, and Quick Play. Adventure is the campaign. Progressing through the mode gets you familiar with various avatars’ special abilities and the game’s levels. It also unlocks the majority of the extra modes, which all to some degree utilize Adventure’s assets. Challenge has you clearing a certain amount of pegs or laying down high scores within the framework of a single level. Peggle Masters pits you against brutal AI in a high score showdown. Quick Play is essentially an isolated campaign level — a leisurely take on the game.

Familiarity need not always breed contempt. No matter how many times I play Peggle, I’m still hopelessly addicted to whatever platform it appears on. After battling through campaign in this version, I’ve found myself incapable of doing anything other than thinking about the next Challenge level or getting into another Xbox Live battle. 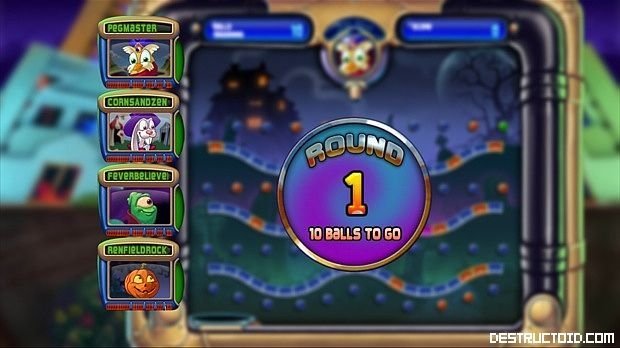 And that’s where the new sweet spot is. Peggle boasts two great multiplayer modes. Xbox Live Duel is a one-versus-one Peggle Masters-style showdown against another player. TrueSkill rankings keep the competition tight, making sure every game is satisfying on some level.

Peg Party Mode is a four-player version of Quick Play where high score is the key to winning. It has a cool HUD that allows you to view opponent’s screens before, after, or during your shot. It also allows you to monitor what special abilities they’ve picked up and how close they are to activating the “Fever” by clearing all the orange pegs. Matches are quick affairs, and never dull. I’ve been constantly surprised at some of the epic scores that have been put up on me.

The only kickback from utilizing a controller is a loss of precision. In the computer versions, you can hover over the peg you want to hit with the mouse, making absolutely sure that peg is going to get smashed. You can’t do that with a controller, and the game’s interface doesn’t make up for it. Other than that minor adjustment on my end, I haven’t found a difference between versions.

The game’s presentation has remained largely the same, with the exception of higher-resolution art. The avatars, backgrounds, and pegs haven’t looked better than this, although they aren’t exactly anything to write home about. Peggle doesn’t have the flair of a Geometry Wars, but the visuals suffice. The music, again the lesser of the presentation, pounds through home theatre systems. It doesn’t irritate nor inspire — it simply exists.

Peggle is one of those games that can hit any platform and still work perfectly. The deliciously addicting game shines on XBLA for a meager 800 Microsoft points. The little touches — the loading bar phrases and the visuals — lend credence to Peggle’s relevance on Microsoft’s downloadable service. The promise of downloadable content is present, ensuring that the single-player person will have plenty to do after galloping through the game’s content. The multiplayer really shines. Peg Party is an impressive mode, sure to keep you interested in the title. If you’re a fan of Peggle, or even new to the series, give this a download. It’s worth every penny.