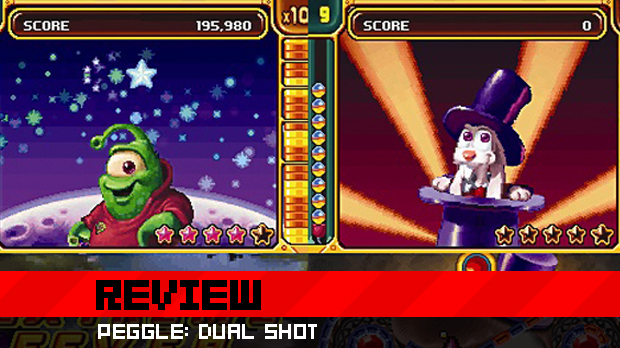 You may not know this, but in the world of game writing/journalism/blogging, PopCap’s puzzle game series Peggle would probably be called the unofficial time waster. Lots of us play it. It’s like the acceptable casual game for game writers. Kidding. But both the PC original and it’s sequel, Peggle Nights, have permanent links on my desktop for quick play during break times, between work sessions, and during boring meetings.

Now the series makes the jump to the Nintendo DS, thanks to help from the guys at Q Entertainment. Peggle Dual Shot takes both Peggle and Peggle Nights and jams them onto one cartridge with new controls and some updated content. So do we like it as a DS game? Will the game journos pick this up as their new time waster?

If you’ve somehow missed Peggle up until now, know that it’s something of a blend of pinball, that Price is Right game Plinko and the Japanese gambling game pachinko. You start with ten balls that you can fire from any angle from the center of the top of the screen. The rest of the screen is filled with pegs of different colors. Your goal is to hit all of the the red-colored pegs with your allotment of ten balls. You only control the firing angle — the rest is up to gravity.

The strategy comes in aiming your ball at pegs to get it to bounce and hit others. You fire, and then watch as your ball trickles down the screen, fingers crossed that it will hit that red pegs you’ve aimed for. As the game progresses, those red pegs become increasingly difficult to hit, which keeps you coming back for more. It may not sound like much, but the game has a way of drawing you in — the simple but addictive game play is something that you keep thinking about when you’re not playing it. It’s a sickness that you won’t want to rid yourself of.

The PC versions used the mouse to aim and left-click to fire. Naturally, this wouldn’t work on the DS. And honestly, I didn’t like the alternative methods at first. But they grew on me. The most obvious method uses the DS stylus and touch screen to aim, with a prolonged touch opening a fine-tuning aim window. You’ll touch the firing device to shoot the ball after aiming. This isn’t the best decision, as missing the firing touch area throws off your aim. The “A” button is also set to fire, but you’ll have to move your stylus from the screen and use your finger, which is even worse. I have no idea why they passed on using the shoulder buttons, as they would have worked out perfectly. 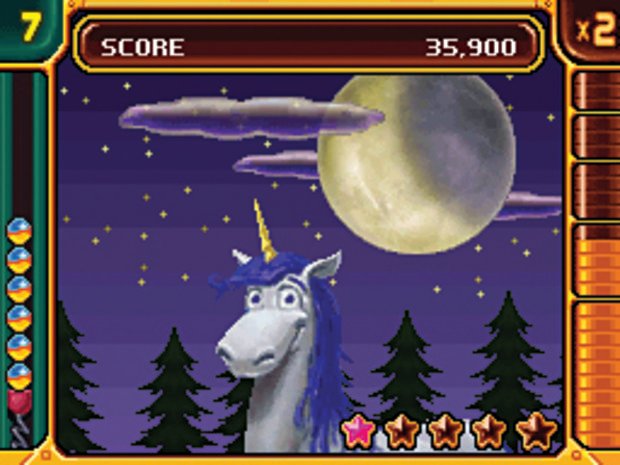 The less obvious control method uses the d-pad to aim and “A” button to fire. Unfortunately, the d-pad’s response time starts out so slowly that you’ll think your DS is broken! Hold it for a bit, though, and it will eventually move, picking up speed the longer that you hold it. It turns out that this slow pace is perfect for fine tuning your shots.

You’ll blast balls onto pegs, making bank shots against walls and obstacles, often times screaming at the heavens that you missed a red peg by a hair in over 100 kooky levels in two games, Peggle and Peggle Nights. Nights is unlockable by finishing Peggle. In both you’ll meet a wierd cast of characters that will grant you power-ups when you hit a green peg, helping you to make those shots a bit easier. These power-ups range from lines that help you aim your bank shots to fireballs that clear everything in their path. And in the later stages you’ll need every advantage you can get your hands on. Speaking of advantages, a new yellow peg whisks you away to a bonus stage where you’ll have pinball bumpers to knock your ball around. Pick up gems to earn extra balls to use back in the main level. Through all of this, you’ll gradually see your luck changing to skill, and you’ll find yourself planning shots instead of blindly firing. It’s then, folks, that you’ll know you’re truly addicted to Peggle. 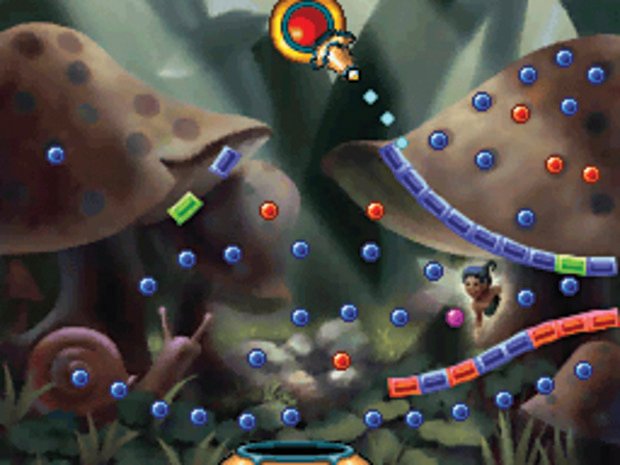 If the two games and their 100+ levels weren’t enough, there’s also new unlockable content from Q Entertainment, new Challenge stages to solve, and a DS-passing turn-taking Duel mode to keep you and a friend entertained. There’s a ton of game content here for your money, and plenty of replay value on top of that.

There’s only a couple small problems we have with Peggle Dual Shot. One is that the ball is pretty small. On the DS, some might consider it a bit hard to see. The new bigger screens of the DSi help out a bit, but I found myself with a bit of a headache after following the ball around in some longer play sessions. The other issue is that this game is missing online leaderboards. In the PC version, bragging about your score and showing off a recorded replay was part of the fun. I at least want to be able to show off my accomplishments in a ranking. Too bad about that.

I’m pleased to say that Peggle Dual Shot is every bit as addictive as the PC version. For me, it replaces the PC versions in its more portable form. I guess the best thing I can say about Dual Shot is that I’m hopelessly addicted — I find myself trying to squeeze another game in every chance I get. For this, we’ll give Peggle Dual Shot our highest recommendation, though this recommendation comes with a warning: this game is a productivity killer. You’ve been warned.