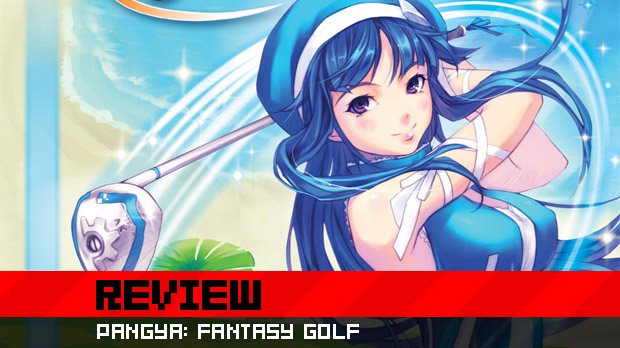 Imagine a golf game like, say, Hot Shots Golf, but with an over-the-top presentation and an RPG-ish layout and story. Oh, and have it starring a cast containing scantily clad girl pirates, huge-breasted military commanders, a cop with a beer gut, and a talking polar bear. Did I mention that this takes place in another dimension on a planet that almost worships hitting balls into holes? Sounds insane, doesn’t it? It somehow manages to make total sense in Pangya: Fantasy Golf for the PSP.

Read on for our review of Pangya: Fantasy Golf.

In this alternate world in another dimension, the game you play with a ball and club and holes in the ground isn’t golf. They call it Pangya, not golf, and the whole process pays homage to a hero in their past that sealed up evil by hitting balls into holes. Right. Golf balls? No, they’re called Aztecs here. And you can hit these Aztecs with clubs, but some use baseball bats and spiked clubs and even swords. While you’ll start out on something resembling a typical golf course, you’ll eventually find yourself hitting balls in strange locales where a sword or club almost makes sense. Almost.

As far as gameplay is concerned, though, you’re still swinging a club-like object to hit a ball, with the goal of having that ball go into a hole with the least number of swings possible. There’s still 18-hole courses and tournaments and tours. And much like Hot Shots Golf series games, you’ll use a three button press swing mechanic: one press starts swing, the next sets strength, and the last sets accuracy. And like better golf games, you’ll also have ability to use trick shots. The L and R triggers let you change clubs, and the directional pad lets you aim your shot. Essentially, anyone who has played another golf game will be able to pick this up and play right away.

It’s easy appreciate how fine-tuned and elegantly simple the control and aiming is. Pangya doesn’t break any new ground for golf, and most courses aren’t particularly challenging (save for some of the last ones), but it doesn’t seem like that was the goal anyway. This is approachable, arcade-style golf, with a focus on fun, and not challenge. That’s not to say that there aren’t holes that you’ll get stuck on, but they leave the simulation golfing to the other titles.

What makes Pangya: Fantasy Golf so great is what it stacks onto that tried-and-true game play. For one, a slowly evolving story has you cycling through and playing as each of one of the craziest casts of a videogame ever. In between these best-of matches, if successful, you’ll gradually see story elements develop that have no place in golf, like love triangles and interplanetary travel. The story, while entertaining, fails to make a lot of sense in the beginning. Give it time, though. If nothing else, it’s good for quite a few laughs. Story sequences are strange enough that if another were to look over your shoulder while playing, they might not understand how Pangya is a golf game.

You’ll earn Pangya’s currency, pang, while playing and winning. With this, you can purchase clothing and equipment to deck out your characters.  While redressing your pirate girl in a frilly dress might not sound that appealing in the beginning, for me, clothing and equipment collection became absolutely addicting in a short time. The costumes are so over-the-top that you’ll want to buy them all. Aside from changing the look of your characters, these purchases can also change your character’s abilities, giving them an advantage during play. Also, a music and artwork gallery is gradually unlocked as you play, and there’s actually a wealth of content to uncover.

A polar bear and a flying paper sack. Great.

Aside from this story mode is both tournament and multiplayer modes. Tournament mode has you unlocking licenses for full tournaments with specific golfing challenges. You’ll compete to, say, see who can hit the ball closest to the hole in one swing. Success nets you points to eventually enter a tourney, as well as more pang to spend on customization. Multiplayer is an ad-hoc affair only. That’s kind of a shame, but the focus here is on portable golfing anyway. This is, after all, a spin-off of their golfing MMO.

The style and presentation are what make Pangya: Fantasy Golf a standout over your typical golf game. It begins with an over-the-top anime-styled opening movie, complete with a bubbly pop song where girls dance in formation and chests bounce. Story sequences are presented with slick character art, and the game play graphics themselves are crazy and colorful. Each of the golfers have hilarious winning and losing animations, as well as pre and post-match rituals. They’ve left the walking-to-the-next-hole and fist pump animations to those more serious golf games.

Pangya: Fantasy Golf takes approachable, easy-to-play golf action and stacks on a ton of game play and even more unlockable content. If you’re looking for a golf sim, there are better choices for you out there. This one’s all about fun, and there’s plenty to be had here.