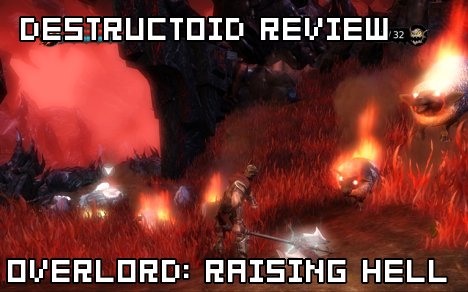 A fantasy world without an overly large, stereotypical demon villain would be far too nice, pretty, and sweet. According to Overlord: Raising Hell, fantasy realms need more evil. In fact, the want is so great that the game flips the typical demon antagonist into the main protagonist. The playful mix of satire, commentary, and terrible accents resulting from the flip is enough to delight even the most pragmatic gamer.

Yet, peel back the skin of the nefarious protagonist and charming little minions and what you’re left holding is a mixed bag. While Overlord is a decent romp through a series of missions aimed to make you laugh, think and fill the world with evil, there are also some particularly glaring flaws. These flaws on the PS3 platform are real deal breakers, and unfortunate considering the promise of Overlord: Raising Hell. 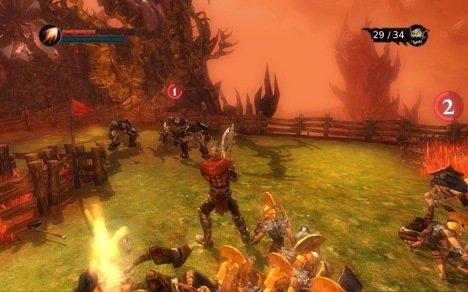 When I think about antiheroes, Richard B. Riddick instantly springs to mind. Riddick’s menthol KOOLs, “eyejob,” and knack for going against the moral judgment always get my blood pulsing. My love of the nefarious recently led me to get my hands on 4J Studios’ port of Overlord: Raising Hell. Overlord is a game of controlling minion hordes, abusing civilians, and conquering a fair-minded fantasy universe. Usually, these things are all perfect in my book, but I found myself questioning the real intent of the game. Am I an evil-doer, or am I just an evil looking protagonist? It’s a conflict that really shouldn’t be so readily apparent.

However, my doubts about the quality of evil content were often pushed aside by the strong satirical commentary the game provides. The ever-eager minions give tons of good laughs through both their guttural, but comedic speech, and their tendency to utilize mundane objects such as pumpkins for armor. Beyond the humor, the game’s take on heroics, honor, and shadow is worth anyone’s time. That’s not say that I was still not confused when confronted with saving a village as opposed to burning it down.

The game begins with an opening cut-scene that explains the history of the character aptly named the Overlord. Apparently, the Overlord was given some grief by a few heroes and subsequently killed for his actions. It’s no matter, though, because the minions restore him to his previous glory and hand over the reigns to the player. Besides dicing up the Overlord, the heroes also trashed his tower. At this point, the game becomes a rebuilding effort to return the Overlord to what he once was that takes him across the fantasy world. In the process he has to battle gluttonous halflings, elves, dwarves, and a few surprises. 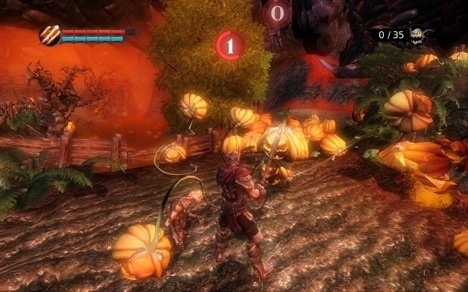 The game is a mix between strategy and action. The Overlord has a few simple actions available to him. There is a simple attack, as well as a basic magic system consisting of a total of four spells. The Overlord can mix it up with the enemies of the land, but it is not suggested. The most important asset to the Overlord is his utilization of minions. Much like a building troops in Starcraft, players can lock onto spawning pools and draw up minions from underground. There are four different kinds of minions, each with specific utilizations. The brown minions are the warrior class, the red are the fire, the blue can swim, and the green are the stealth variant. Each class has its own special abilities outside of just the obvious utilizations as well. The minions are spawned within a certain cap, and special orbs need to be collected to replenish the supplies.

The majority of time, the player utilizes the minions most with the puzzle activities of the game, which almost always consists of clearing debris or carrying an item back to the tower teleport. This is where the game starts failing on the PS3. The controls in Overlord are fickle, and the camera can be highly annoying as it swings and twirls in all the wrong places. There are two ways to control the minion horde. The first of which is simply jamming on a trigger in the direction of the object of interest. Most of the time, the minions will gather up the appropriate object, except the inexactness of the maneuver can lead to several miscues involving the minions going for a stack of plates instead of a treasure bag. Thankfully, there is a lock-on mechanism for easier deployment, but the poor path finding and typically dumb AI can still lead to cataclysmic hiccups. When you’re hitting everything right, the game is really fun, but when the minions start running around like chickens with their heads cut off, the game just starts to break down.

Players can also manually steer the minions with the right analog stick, which is needed in certain sections of the game. This process is usually arduous as the minions don’t respond well to this control scheme or auto-lock on the wrong objects on a consistent basis. Later, when all four sets of minions are available, the game becomes quite frightening to control because of the nature of the gameplay. Most puzzles towards the end of the game require different sets of minions doing different things. While picking which set to give orders to is a simple procedure, steering them around the environment becomes a micromanaging nightmare, especially with enemies present. The nasty frame rate drop that accompanies the PS3 port then aggravates this process even more, and can lead to some very unsatisfactory conclusions. 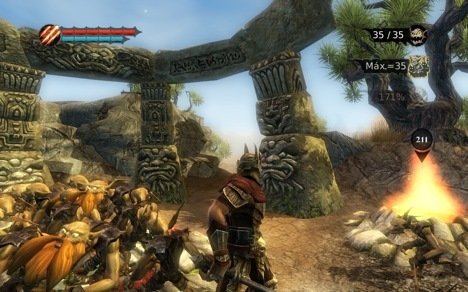 Overlord: Raising Hell has an online multiplayer component to it, but good luck trying to find someone to play with. I tried unsuccessfully for hours, and it appears that if there is anyone out there willing to play, they aren’t online much. Thankfully, the same three modes offered online are available via split-screen. There isn’t anything especially intriguing about the modes. “Slaughter” pits two Overlords and minions against each other, while “Pillage” is a just a gold collecting exercise. “Survival” is the only interesting mode available, and it is just a cooperative experience to kill enemies that appear on the screen. The technical problems experienced during the single-player are greatly pronounced in split-screen. The game slows to a crawl often, making it practically unplayable.

Visually, Overlord is showing its age. What was once fresh now looks bad by today’s newer standards. I only bring this up because it looks like the game was just perfectly ported from the 360 version. If there was anything updated or detailed more thoroughly, my eyes missed it. Even though the visuals are a bit wonky, the music, voice acting, and sound effects still suffice.

The new content available in this expansion version of Overlord is only new missions and an advanced forge. The forge is certainly an improvement over the last version, as it allows players greater customization of armor and weapons. The big change is the addition of new missions and story elements. The content doesn’t provide anything amazing to the original game. In fact, the new stuff is really irrelevant if you already did not enjoy Overlord or its gameplay, which is understandable considering how technically hindered this version of the game is.

When everything is accounted for, Overlord: Raising Hell is an occasionally fun game that is rarely engaging, but always funny. The flair of the game has a tendency to overshadow the majority of its problems, and that’s the big catch. Overlord: Raising Hell is special in regards to its satire, but is an inferior game on the PS3 platform. If the game didn’t chug like a locomotive or if minions were easier to control then I could see myself really enjoying the experience. The same goes for the expansion content. It’s great to have these new elements, but it’s hard to really bite into it when the game performs so poorly.

Score – 6.0 (I can see some people that really dig the humor enjoying this game immensely. At the same rate, the game feels old and controls miserably. Definitely rent if you never played the previous Overlord game before.)