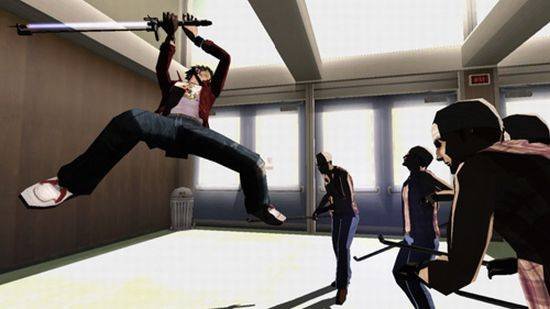 If you’re not interested in No More Heroes, you probably don’t have a Wii. Suda 51’s nonlinear, pop-otaku, lightsaber ultraviolence epic has been highly anticipated by both action junkies hankering for something more mature to play on their Wiis, and diehard fans of Suda 51 himself. No More Heroes seeks to integrate motion-controlled lightsaber combat with a nonlinear world, and then wrap it all up in an ironic, over-the-top, self-referential videogaming storyline.

Does it fall into that unfortunate trap of using gimmicky, unnecessary motion control as so many other Wii titles have? Does Suda 51’s brand of surreal, nonsensical storytelling translate well to a nonlinear action brawler? Is the open world city of Santa Destroy awesome, or superfluous?

Jonathan Holmes and I bought the game, played the hell out of it, and answered those very questions. Hit the jump for our reviews.

It’s silly, over-the-top, and by no means perfect, but it succeeds in that most elusive of areas: it is absolutely, positively, hilariously fun.

Suda 51’s latest style-is-substance exercise in gaming surrealism follows the exploits of Travis Touchdown, a super-exaggerated version of your average videogame junkie teenager, as he attempts to become the number one assassin in the city of Santa Destroy. Beam katana in hand, Travis spends the entirety of his 10-12 hour adventure performing small jobs for chump change, motorcycling around the city, and slicing up enemies.

And lemme tell ya — he slices up a lot of enemies.

During combat, the player controls Travis with a mixture of simple button mashing and the occasional Wiimote gesture. For a game based on lightsaber fighting, one might initially find the lack of 100% gesture-based Wiimote fighting more than a little disappointing. After a few fights, however, one begins to realize just how brilliant NMH’s fighting system really is. Rather than going down the route of Twilight Princess or Spider-Man 3 where the player meaninglessly and apathetically swings the Wiimote back and forth like a fly swatter, No More Heroes prefers to use its motion control much more judiciously. 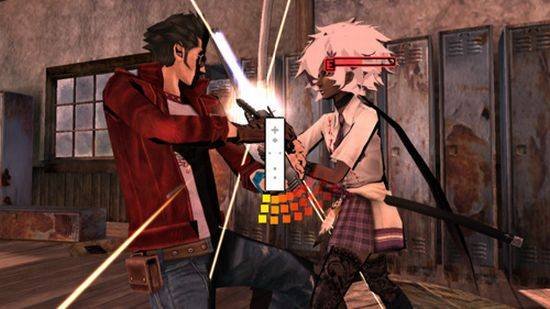 The A button swings Travis’s beam katana and the B trigger activates shield-breaking physical attacks. You’ll be using these two buttons during 90% of any given fight. Nothing special, right? Well, after button-mashing the enemy down to within an inch of his life, a large, blinking arrow appears onscreen, instructing the player which direction to swing the Wiimote in order to activate a finishing move. Upon swinging up, down, left, or right (ideally while yelling something badass), the player is immediately rewarded with an over-the-top decapitation or dismemberment, complete with an equally, hilariously exaggerated blood spray effect. Motion gestures are also used for sword clashes (spin the Wiimote around in a circle as fast as you can to overpower your opponent) and Travis’s wrestling moves (simultaneously use the Wiimote and nunchuck to bodyslam), and they work really well.

In saving the motion gestures for these high-energy situations, Suda 51 makes them infinitely more satisfying: after thirty seconds of furious button-mashing, it is indescribably fun to finally slice your opponent in half with a quick slash of the Wiimote, sending absurd amounts of blood to all corners of the screen. The Wiimote finishers act as tiny, superviolent cherries to top off every glorious kill, and they make the otherwise standard (and potentially repetitive) combat system far more fun than it really has any right to be. Every single Wiimote move feels consequential, precise, satisfying. Additionally, the sword-charging masturbation gesture may be one of my favorite things in the entire game: imagine cutting a guy in half with one swing of the Wiimote, then furiously jerking off with the Wiimote to recharge the beam katana’s batteries. The combination of alternately violent and sexual gestures makes for a very, very odd feeling, but a hysterically entertaining one (especially if you’re watching someone else do it).

Aesthetically, every aspect of the game positively drips with style. From the 8-bit menus and minimap, to the too-cool-for-school cel shaded graphics, to the hilariously exaggerated bosses (the third boss fires a massive laser beam from his crotch), No More Heroes knows exactly what it wants to be. It is a game made for videogame junkies, about videogame junkies, by videogame junkies: Travis Touchdown’s character motivation doesn’t extend beyond his lust for fame and sex, and he kills bad guys not to make the world a better place, but simply because it is fun. No More Heroes (very appropriate title, by the way) constantly exudes the sort of happy, superviolent-yet-harmless nihilism I haven’t seen since the days of Scud: the Disposable Assassin, and it definitely represents a welcome change of pace. Travis exists just to kill, the bad guys exist to be killed, and Suda 51 has an absolute ball with alternately mocking and showing his appreciation for videogaming culture. 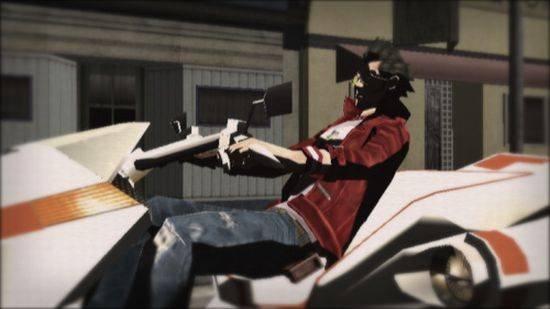 This isn’t to suggest No More Heroes is all wine, roses, and dismemberments, however; while the game’s linear aspects work quite well, the open-world city of is responsible for the game’s most frustrating moments. Take Travis’s motorcycle: considering it’s his main means of conveyance across the city, one would imagine the bike would handle tightly and gracefully. Imagine my surprise when I found myself making absurdly wide turns, crashing for odd reasons (running headlong into a car doesn’t throw Travis off his bike, but bumping into a light pole does), and constantly getting stuck in the scenery for no rhyme or reason. I eventually got used to the motorcycle’s sluggish control scheme (especially once I found out how to make immediate 90 degree turns), but driving around on the bike just didn’t feel as out-and-out fun as it should have been.

The game’s currency system is similarly problematic. In order to unlock ranked assassin matches, Travis must perform a variety of odd jobs and assassination missions, all of which are fun to play exactly once. This is fine, assuming you don’t want to upgrade your beam katana or buy new clothes or training; however, should you want any of those things, you’ll have to play some of the same minigames over and over. “Want a new sword?”, the game asks.  “Fine, but you’ll have to replay this little assassination sidequest five more times before you can afford both the sword and the entry fee for the next story mission. Idiot.” Forcing the player to dick around with sidequests before unlocking the next part of the story has been done before (Saint’s Row), but No More Heroes actually punishes the player with repetitive gameplay just for wanting to upgrade Travis’s loadout.

However, it’s hard to complain about the faults of the open-world system when you’re slicing and suplexing your way to bloody, over-the-top victory throughout the rest of the game. The story missions do a decent job of switching up the action as you progress through the game — consider, if you will, a moment near the end of the game when a boss literally throws sex gimps at Travis — and the game ends at just the right time so the combat doesn’t have a chance to get stale. Still, I couldn’t help but wish for even more variety in the boss battles: a few too many of the assassins can be defeated simply by backing off and waiting for them to attack, then slapping them repeatedly with your sword until victory. 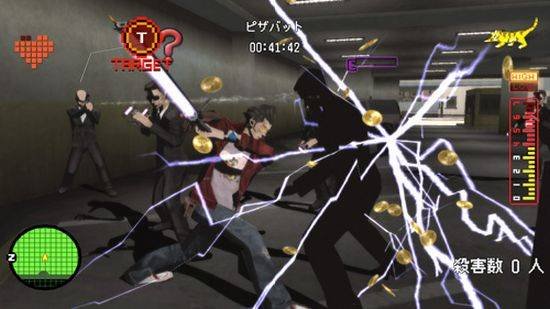 In the end, though, No More Heroes is a must-buy for any self-respecting Wii owner. The open world stuff is lame and the game always seems about a step and a half away from feeling incredibly repetitive, but the Wiimote usage and imaginative, unusual stylistic touches make No More Heroes one of the most unapologetically enjoyable games I’ve played in quite a long time. One cannot play through the game without noticing its various flaws, but by the time you’ve simultaneously decapitated four bad guys in one glorious, motion-controlled sword slash, those flaws will be all but forgotten in the flood of gruesome, wacky fun which No More Heroes has to offer.

Me and the Reverend mostly see eye to eye on this one, but there are few bits of awful he failed to mention, and a few bits of awesome I just can’t help but gush about.

I’ll start with the awful. This game looks like a Dreamcast game. A really high budget Dreamcast game with brilliant art direction, but a Dreamcast game none the less, this on a console that some say is as powerful as two GameCubes duct taped together. Occasional polygon drop out, low res. textures, inconsistent frame rates, hoards of identical enemies, it’s very Zombie Revenge meets Shenmue.

I was hoping the final build of No More Heroes would look a lot closer to the teaser trailer for the game that debuted in late 2006. That is exactly what I imagined a high budget, high proflie Wii game could look like. Perhaps Suda51 had a change of heart and intentionally made the game look more “retro” for the sake of being “punk rock”. Or perhaps Marvelous Interactive Inc, the studio that funded Suda’s studio Grasshopper to make the game, just didn’t have the money to make that game look better. Regardless of the cause, it’s hard to explain away home-console graphics this un-polished in 2008.  Even that upcoming Final Fantasy WiiWare title looks better than this. 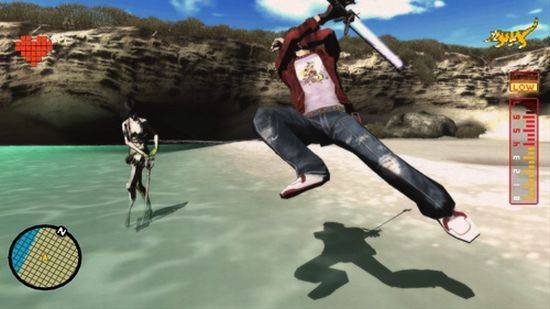 Now for the awesome. No More Heroes’ over-arching theme, “What if a hardcore videogame fan actually got to star in a videogame?” is delivered with near perfection. Travis Touchdown is just a guy, a sort of lazy guy with no real responsibilities, in a world of stupid jobs, limited social contacts, burger chains, and hunger for excitement in a meaningless life. But unlike us, when Travis Touchdown plays a videogame, he lives the videogame, with the top ten high score ranking at the end of each level to prove it. Every time you earn enough money to enter an “Assassin’s Ranking” segment of No More Heroes, you get that “I just got a new game!” feeling, and you sense that Travis gets that feeling right along with you. Props to Suda51 for pulling this off. He is a true auteur.

In conclusion, No More Heroes almost feels like it’s cheating. A game this unpolished looking doesn’t deserve to be this fun. People already turned off by the Wii’s lack of graphical horsepower may not be converted by NMH. If the game ends up a retail failure, I don’t believe it will mean that mature Wii games don’t have an audience, but rather that developers can’t get away with Dreamcast quality graphics on the console anymore. If NMH looked as good as it could, I would recommend it to each and every of age Wii owner out there. Hopefully I’ll be able to make that same recommendation for the high budget, No More Heroes sequel that as of now only exists in the land of maybe.

Filed under... #No More Heroes