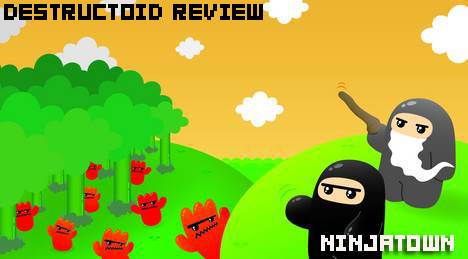 While most people may have seen the previews for Ninjatown and thought the art design was adorable, I had a more personal interest in the progress of the title: it marked the first marriage between the designer toy world so close to my heart and the gaming world. Artist Shawn Smith has been the mastermind behind Shawnimals for years now, creating iconic characters such as the Wee Ninja and immortalizing them in plush and vinyl forms.

Just because you have great character design does not always make for a great game, though — God knows there are plenty of games out there with characters that didn’t quite stick or gameplay that didn’t cut it. If you’re curious whether Ninjatown vaulted the adorable fence and made it about more than just looks, you’ve come to the right place, my friend.

Hit that jump — but hit it with stealth.

In case you know nothing whatsoever about the lore of Shawnimals characters, I’ll fill you in: Ninjatown is nestled between the Dark Forest and an active volcano called Mt. Feroshi, and is home to many different types of ninja, each with their own set of skills. The Wee Ninjas that live there spent their time making star-shaped cookies from their secret recipe, harvesting Stealth Wheat (which only grows in the dark, naturally) and Night Cocoa. 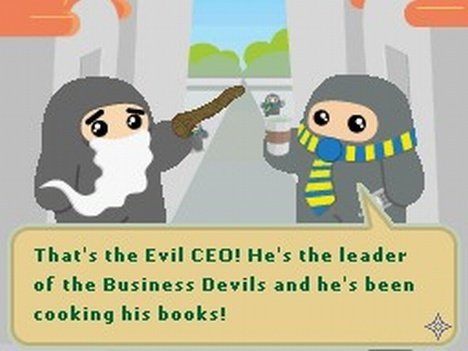 This peaceful town has been invaded by the Wee Devils, who are after the ninjas to give up the secret cookie recipe. Here is where you step in, aiding Ninjatown in their defense against the Wee Devils invasion by putting your tower defense skills to the test. After a quick cutscene, you’ll find yourself defending the suburbs in your first fight.

I went into Ninjatown slightly worried. I’m not much for complex management of troops, as I don’t typically play strategy titles. However, Ninjatown starts simple and teaches the player new tactics in such a straightfoward manner that easing into it is very comfortable and not intimidating in any way. Thanks to the help of Ol’ Master Ninja, a wise resident of the town who helps you in battles, there is often a way to rescue yourself from even the most overwhelming circumstances.

On the top screen, you’ll see an overhead map of the level you are playing on your left and Ol’ Master Ninja in a hot air balloon on your right, along with a scale that shows what type of Wee Devil will attack next and how many waves you have completed. On the bottom screen, you’ll see your map, which you can move around easily using the control pad (you can slide it with your stylus too, but I found this option to be comparatively slow). 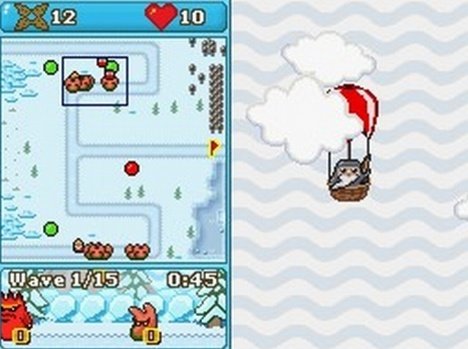 The bottom screen is where all the actions takes place. Using your stylus, you can build Ninja Huts and populate the map in order to keep the Wee Devils at bay. These huts can be upgraded as you take out enemies and earn cookies, and you can build many different types as the game progresses.

While the cutscene interactions between characters are pretty cute, battles are the point at which the game starts to really shine. Each different Ninja (and for that matter, each type of Wee Devil) has a distinct personality, from Business Ninja (equipped with cell phone) to portly Wee Devils who will burp angrily while they attack you. Once you start using special items like Ninja poop to keep enemies from reaching the goal, you’ll know the people behind Ninjatown have a solid sense of humor, and they aren’t afraid of using it! Each level you complete is graded as well, which encourages replayability to get your straight A’s.

You could assume at a glance that Ninjatown is aimed at kids because of the bright, happy art style, but this is not the case. Rather than take the common road by leaving the difficulty challenging but kind of average, the game ramps it up organically, and the first time you get your ass kicked you’ll find yourself a bit surprised at how quickly you got overwhelmed. By the time you get to level three, you’ll need to be using all your resources, or otherwise, Ninjatown is done for. 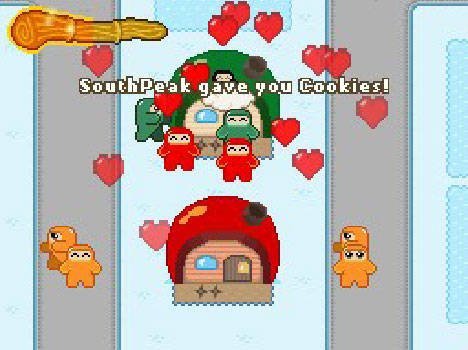 As I mentioned before, the Wee Ninjas are not your only line of defense. You also have the help of Ol’ Master Ninja, who allows you to use skills like Get Off My Lawn by blowing into the DS microphone to keep attackers away. His cane will be visible on the top left of the bottom screen, and when it is charged you will have access to several of his special skills. You also earn items for completing fights (which is where one can make their first acquaintance with Ninja poop.)

When it comes to Ninjatown’s multiplayer, you have a few options. You can play the game with one card using the Wi-Fi connection, and you can share three levels with another person. However, if both people own a copy of the game, you have eight levels to choose from, which showcase a lot more variety. Whichever player takes out a wave of enemies more quickly wins the wave and is rewarded with a bonus item for doing so.

While I enjoyed the multiplayer, my first thought was that it felt a little bare-bones, almost like an afterthought. I would really have enjoyed creating my own maps to play against other people, and while I feel it’s unfair to criticize something that is essentially a pretty fun experience as is, I have to say I hope this level of customization would be considered if they go forward with this franchise. Being first and foremost a retro gamer, simple games appeal to me, but I realize that a lot of people desire more to do. 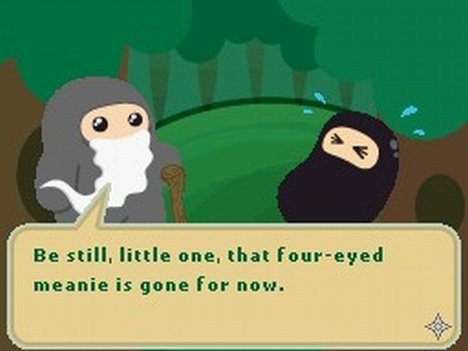 After all is said and done, Ninjatown is a great game, providing solid, fun gameplay that left me feeling challenged enough (and addicted enough) to keep playing. With each battle lasting about ten minutes, this is a perfect title to play in short bursts and makes for an ideal portable title. As long as you aren’t turned off by the cute factor, Ninjatown offers up a solid tower defense experience with great personality and humor.