I may as well just come out and say that Ninja Gaiden: Dragon Sword is the best action game on the Nintendo DS. To be fair, it doesn’t have much — if any — competition. The Nintendo DS catalog is packed with quality titles, from role-playing games to action-platformers to puppy raising simulators.

But straight up combat-action is a genre that has long skipped Nintendo’s handhelds, so it was an interesting choice Team Ninja made when deciding to bring Ninja Gaiden to the DS. Stylus gesture-based controls? Demanding we hold the Nintendo DS like a book? Is it a sword that looks like a dragon, a dragon that looks like a sword, or neither!? Has the entire collective of Team Ninja lost their minds with all of this crazy talk?

You’ll find no answers to those questions — but you’re sure find our review — after the jump.

To Team Ninja’s credit, they’ve done a pretty spectacular job adapting Ninja Gaiden’s signature high-intensity combat to a handheld. It probably would have been easiest to simply attempt to adapt the controls to the consoles buttons and d-pad, instead Dragon Sword makes good use the handheld’s standout feature, the touch screen. Interestingly, the DS is held open like a book during play, and all actions (save for block, which is your choice of any of the handheld’s six buttons or d-pad) are done by varying stylus strokes.

Instead of being forced move Ryu through a 3D space with the d-pad, you simply hold the stylus in any direction. Attacks are done in a similar fashion with the stylus — sliding the stylus across the screen horizontally will trigger a basic slice, for instance. Sliding the stylus upwards will make Ryu jump, and sliding back down quickly while in the air will make him violently slam his sword to the ground. As you progress through the game, you can also purchase upgrades to the Dragon Sword which will open up different types of attacks (counters or launching an enemy in the air, for instance).

Certainly, your touch screen will get a work out while playing Dragon Sword. The game features very little platforming elements (if you count repetitively dragging your stylus upwards as platforming), and there’s a very obvious and deliberate focus on combat. For the most part, everything feels great, and the first time you slice through an enemy you’ll get a palpable feeling of accomplishment and excitement that can only come from something like the interaction with the stylus and touch screen. Holding the DS like a book and using the d-pad (or face buttons for lefties) to guard is awkward at first, but soon becomes second nature, and before long you’ll be rolling to avoid enemy attacks like a champ.

There’s really no problem with how Dragon Sword plays. The stylus controls are spot on, and once you’re familiar with the various motions that are attached to specific attacks, you’ll have no problem wiping out hordes of enemies without much thought. But therein lies the problem – the combat in Dragon Sword is overly simple, and this much becomes apparent halfway through the game when you realize that you’ve adopted one or two tactics to clear out every single room full of enemies.

The game’s ninpo, or ninja magic, system also takes advantage of the game’s touch screen. Simply tapping the ninpo icon at the top of the screen will bring up a Japanese character which must be traced with your stylus to perform the action. Many of the magics, like the Art of the Fire Wheel, will be familiar, and many must be purchased and used to advance through the story. The first time a ninpo is performed it feels great – the sweeping motions of the stylus seem to mimic Ryu’s in-game motions, which really make you part of the experience.

But ultimately, the ninpo feels like a bit of a gimmick; when posed with the task to trace the Japanese character, you either do it or you don’t – there’s nothing in between. Missing a stroke won’t result in a half-assed performance of the magic, and even tracing out of the lines doesn’t appear to have any impact on the overall result. And while you’re given a time limit in which to perform the motions, the window is so large and the characters are so uncomplicated that you’d have to be completely incompetent or stoned to miss your opportunity. Luckily the game is short enough that having to go through these motions a handful of times never really gets too annoying. 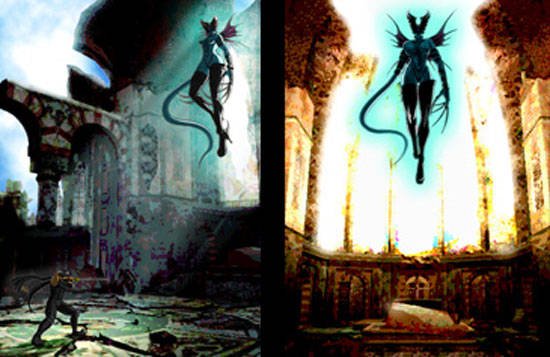 It’s also surprising that rolling around and then wildly swiping at the touch screen remains fun throughout the game’s 13 chapters, but that happens to be the case. However, the obvious mindlessness of it all can’t go unnoticed, and the ease at which enemies can be taken out is a bit disappointing considering the notorious difficulty found in Team Ninja’s console Ninja Gaiden titles. Really, if you’ve seen one room full of melee enemies with one or two floating eyeballs firing things at you, you’ve seen them all. The sad part is, whatever method you’ve found works to slay enemies early on will still work by the game’s conclusion. The same can be said about the game’s bosses, most of which seem to be huge, projectile-firing dragons (or a variation of such) who just can’t seem to withstand the formidable “roll out of the way, slash like a maniac” combination.

Perhaps one of the reasons why things don’t get stale as quickly as you’d imagine they would is how gorgeous Ninja Gaiden looks on the Nintendo DS. Always one to push any hardware they’re working on to the limits, Team Ninja has squeezed a lot out of Nintendo’s little handheld. There’s no question about it, Dragon Sword manages to pull off 3D environments and characters in such a way that you hardly even notice you’re not playing the game on a next-gen machine in high definition. Ryu’s animations are silky smooth (when you can actually see them beyond your stylus), and the environments have enough color and detail to make them feel believable.

Dragon Sword also takes a different and interesting approach to cut-scenes and storytelling, ditching the over-the-top, pre-rendered sequences found in its console predecessors. Gone are ample and bouncy breasts of scantily-clad, blue-skinned Fiends which are replaced by more subtle Manga-style artwork … of ample breasts of scantily-clad, blue-skinned Fiends. In all seriousness, while the clean look of the artwork might first turn off fans of the series, the softer feel and vibe works exceptionally well on the handheld format. 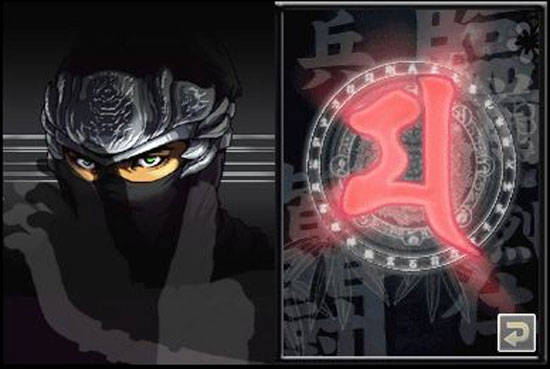 The hard-hitting techno-rock stylings of the Ninja Gaiden score make their return on the DS, and it all sounds crystal clear, especially when rocking some headphones. Longtime fans of the series will also get a kick out of the musical nod to the old-school you’ll hear between each chapter, as well. The game features no spoken dialog, but the grunts and exclamation noises made by Ryu and the game’s various other characters are fitting, and never really get annoying. And while I do question the use of a cougar sound used for some of the enemies, cougars are totally sweet and hey, why not use pouncing jungle cat sounds?

Team Ninja has also added in a few extra features, including Wi-Fi support in the form of online rankings, which uploads your total karma (the game’s point system, if you will) to a leader board. If like me, you find the game’s “Normal” difficulty to be a bit too easy, completion of the main story will unlock “Head Ninja” mode for an extra challenge. But truth be told, the only major difference between the two modes is in the amount of damage enemies will cause; they’ll still attack in the same fashion, so if you found yourself flying through the game on “Normal,” the ‘tougher” difficulty may only prove to be slightly more challenging.

The game also has hidden prizes in the form of wooden tablets that can be found throughout the game by yelling into the microphone of the Nintendo DS which will draw out bird which must be cut down in order to obtain the secret. Prizes include diaries which reveal back information on the game’s plot, character data, and cut scenes — this is truly only for the hardcore, the collector, or someone who really wants to squeeze every penny out of their purchase. 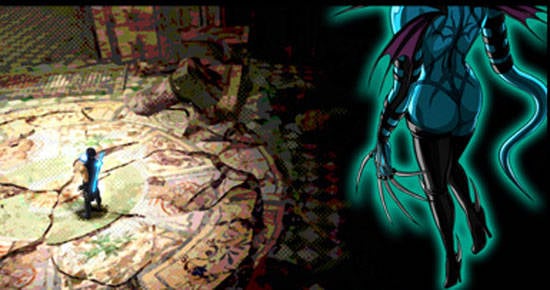 Truthfully, Ninja Gaiden: Dragon Sword is exceptional in many ways, from its blindingly fast, yet simple gameplay, to its slick visuals and animations. There’s nothing really wrong with the game per se, as Team Ninja pull off everything with style and extreme competence not yet seen on the Nintendo DS in this genre. To be fair, Dragon Sword is a blast to play and there’s nothing that really comes close to the same experience on the DS. But when it takes roughly five or six hours to complete a game — and most of those six hours are spent reliving some of the best moments from the first hour and a half — something feels a bit off.

Score: 6.5 (Slightly above average, maybe a little niche. But you wouldn’t recommend it to everybody)