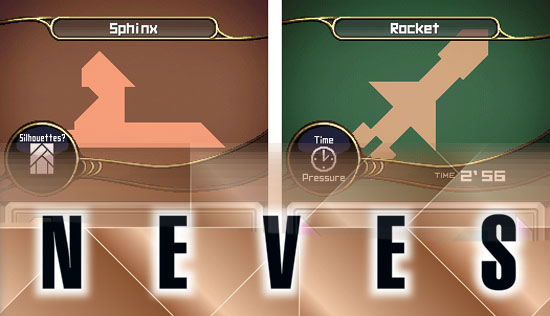 Adding another “casual” game to the already grandma-friendly DS catalog is something that most who claim themselves to be hardcore gamers would sneer at, but I’ve always argued that the term “hardcore” should be used to describe those with a passion for great video games, regardless of where they come from or what genre they’re crammed into.

Enter NEVES, the new puzzle game published by Yuke’s of America. Using what is arguably one of the simplest concepts the puzzler genre has ever seen, NEVES approaches all the classically styled block games that have found a cozy home on the Nintendo DS and asks if they want another roommate.

Should we let it in? Should we charge it more than its share of the gas bill and make it clean the bathroom? Or does the new kid have something unique to bring to the table? Hit the jump for my full review.

NEVES, on its surface, is just what you’d expect from any typical puzzle game. It’s fun, it’s insanely addictive, and it utilizes blocks in some manner. What sets it apart, however, is how inherently simple it is, and how it conjures so much goddamn fun from something so absurdly basic. You’ve probably done something like it a thousand times, (maybe in kindergarten,) but somehow it still manages to feel like a fresh experience.

The whole game breaks down like this: You’ve got seven shapes, like little wooden blocks, and you have to put them together to make a bigger shape. No, really, that’s it. It’s the same seven shapes every time, too. Sounds like it might be fun for about half a commercial break while you’re watching a Yogi Bear cartoon, right? You’re presented with the silhouette of a shape, a rabbit or a helicopter for instance, and the seven smaller “blocks” are strewn about on the touch screen. The object is to take the seven blocks and place them over the silhouette so that they fill in its exact shape.

Selecting one block at a time with the stylus, you can rotate or flip each one any way you like and then move it into place. If you’ve played any of the extra modes in Tetris DS, you already know how to do this, and even if you haven’t, you can still learn it in a matter of seconds. The challenge comes in after about number 2 of the game’s more than 500 puzzles, when you realize that your brain is used to looking at things a certain way and is now playing tricks on you. Therein lies the fun.

The meat of the game is Silhouettes? mode, and the other three modes are just variations of it. 7 Steps mode requires that you place each block in the correct position on the first try. Deselecting a block in favor of a more attractive one counts as a turn against you, so you’d better know what you’re going to do with that triangle, otherwise you’ve failed. Time Pressure mode is self-explanatory, and the multiplayer mode (which only requires one DS card, hooray!) consists of trying to clear your puzzle faster than your opponent can.

The visuals here are as good as they need to be; no better, no worse. It’s evident that some effort was put forth to make the game look decent, but this is certainly not Lumines. You have your shapes, you have your menus and UI elements, and nothing really ever leans toward either end of the sparkly-yucky spectrum. It simply is what it is. I’ll shrug and say it doesn’t matter, because while the developers could have polished things up some, the heart of the game is in the puzzle solving and any issues you may have with the graphics will quickly fade after your first few rounds of play.

Difficulty levels range from ten-second cakewalks to all-out brain twisters that leave you scratching your head in true “WTF” fashion, and it seems as though your trouble meeting your goal could depend on any number of factors. Maybe you need a cup of coffee to clear your head, maybe you’re overthinking what’s in front of you, or maybe you’ll clear the round in the blink of an eye. Who knows? Some of the simplest, most unassuming shapes turn out to be the most difficult puzzles to solve, and more often that not, you’ll be forced to think outside the box a bit. This is brain training as fun and effective as anything Dr. Ryuta Kawashima himself could throw at you.

The game doesn’t have the same hypnotic, zone-out property that I look for in a lot of puzzlers, but that might be part of its appeal. The prospective shortness of each round makes it perfect for those quick “my girlfriend is trying on clothes and I’m bored” gameplay sessions, and you don’t want her to find you slobbering on yourself in some heightened state of gaming zen when she asks what you think of the green dress. If you’re on the subway with only a few stops to go, or waiting in a long line at the bank, NEVES ranks right up there with Tetris or any other notorious “pick up and play” title, and might even suit you better in that you’ll actually be able to finish a puzzle or two and make some progress in that small span of time. Hell, leave your DS in the bathroom on burrito night, boredom will not find you.
Now I know you wouldn’t believe this review was coming from me if I didn’t have something bad to say about it, so let’s get to my only major gripe about NEVES. The music is just plain awful. I mean bad. I don’t know what I’d suggest they should have used instead, other than to say “not this,” but I really can’t do an honest review without stomping all over the tunes here. Think walking your Nintendogs. Think Hotel Dusk cutscenes. Think Kenny G in midi form. This is that same doctor’s office waiting room suckjazz that’s becoming the standard for so-called “casual” games. Sometimes the tempo and progression of it can add a sense of urgency to what you’re doing in Time Pressure mode, but even then you’ll hate it just the same. Maybe even more if you’re dealing with a particularly tough shape. I recommend just turning it off altogether. Volume goes down, game becomes awesome again. It’s magical.

Whether you choose to suffer through the soundtrack or not, once you become familiar with the puzzle pieces and get the hang of what to do, any flaws you might be able to point an accusing finger at will quickly vanish. I fully expected to like NEVES, as I enjoy most puzzle games, but I really am astounded at how much fun and contentment can come from something so very, very simple. In all honesty, it’s like having a huge roll of bubblewrap to pop, only it won’t drive everyone around you crazy. Unless maybe you have the music turned up, that is.