Arcade sports games have always been a strange beast. Most have been designed around multiplayer madness, with you and your friends in a room shouting at each other while performing feats that defy the laws of physics. And accordingly, their single-player modes have tended to be somewhat lacking.

So developers have tried to freshen things up in the arcade sports genre by introducing “career” or “lifestyle” modes. Here, the idea is to start out as a nobody in your sport, and take your game to the top. NBA Ballers: Chosen One is one of those games. It’s the fourth game in Midway’s NBA Ballers series, which is all about the basketball/hip-hop high life.

Sure, we’d all like to be paid millions of dollars to play a sport for a living, but unfortunately, I’m barely 5’7″, and I don’t have much stamina when it comes to running up and down a basketball court (or running in general, now that I think of it). As such, I checked out Chosen One, because videogames — especially sports games — are all about living vicariously. To find out how it went, hit the jump for Destructoid’s review of NBA Ballers: Chosen One. 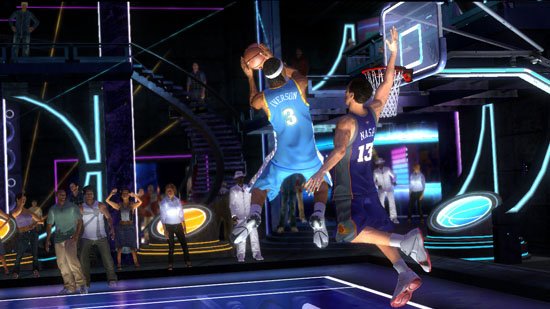 Let’s get this out of the way for those of you who haven’t already scrolled down to see the score. NBA Ballers: Chosen One is a game that is mediocre at best. Many of the negative aspects that I mention will seem like nitpicking and semantics, but they eventually add up to create an experience that is only fun in spurts. In addition, there are a few game-breaking flaws, along with a number of things that you’d think would be standard in a sports game, yet are missing here.

But I’ll start off with the good stuff — because there’s so little of it. As Nick mentioned a while back, Chosen One employs hip-hop icons Chuck D and producer Just Blaze, and they’re used to great effect in the game’s presentation. I was worried about the soundtrack once I opened up the game’s jukebox and saw fourteen tracks, all by Just Blaze — but the songs are instrumentals, and they are fantastic. This stuff is good — and coming from me, that’s saying a lot; I’m not a big fan of hip-hop in general.

Chuck D acts as a master of ceremonies of sorts for the game’s story mode. The single-player mode is split up into six “episodes”, each of which contains six “chapters”. Before each episode, you’ll see some footage of Chuck D in the equivalent of a TV studio (think NBA on TNT, etc.) talking about “NBA Ballers: Chosen One” as a fictional TV show. The idea is that they’re searching for the next great baller, and you, as an up-and-coming phenom, are one of the contenders. This HD video looks great, and it works as a realistic intro to the “episodes”. Plus, hearing the frontman of Public Enemy talk about you as a “phenom” is just damn cool. 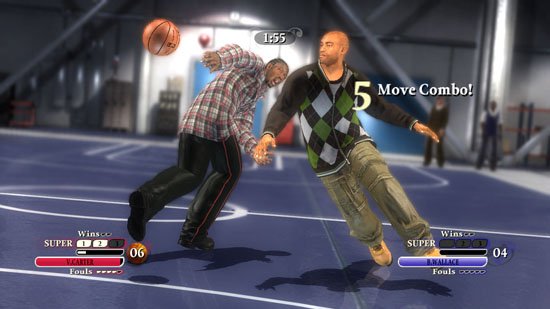 In addition to being on video, Chuck D also brings his vocal talents to the table as the game’s only commentator. He injects some personality into the rather ordinary proceedings of commentary with such phrases as, “He throws it up from the next area code,” but ultimately, there isn’t much variety. I’m already starting to hear Chuck repeat himself.

The game has an impressive roster of basketball players, past and present: you can choose from 67 of today’s NBA stars and 14 of the sport’s legends. But because the story mode is a rags-to-riches tale, you must create your own baller to play through the story. The Create A Baller mode is pretty standard fare. First, you set up your baller with basic info (name, birthday, position, etc.), and then pick a nickname. There are plenty of those to choose from, and while not new by a long shot, it’s a cool feature — Chuck D will shout out the nickname you pick when you do something of note in-game. Naturally, I picked “Bronx” for my baller (sadly, “Strong Island” wasn’t an option), so I’d hit a shot and hear stuff like, “The man from NY, Bronx, drills the J!”

Next, you get to determine what your player will look like. The options here (nose width, chin width, etc.) appear to be much more deep than they really are — I swear, moving many of the sliders all the way to the left or right seemed to produce no appreciable change in appearance. After that, you’ll have 480 points to distribute among 16 attributes (the most you can put into any particular field is 40). As you play through the story mode, your attributes will increase accordingly with how you play. For example, if you win by hitting lots of three-pointers, that attribute will go up faster. For some strange reason, you can’t have more than one created player at a time in a particular profile. 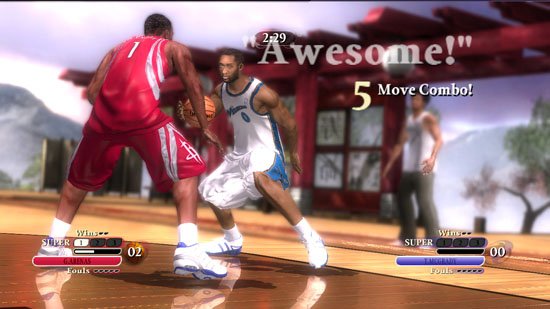 So far, it doesn’t sound too bad, right? Well, things quickly go south once you actually start a game. First of all, the loading times are rather long — expect to wait thirty seconds or more to get into a game. Before the start of a game, the camera will pan around the court (there are six in the game altogether), but after that, the screen will freeze for a second. Then, the screen will switch to a view of a basketball in mid-air, and then the game will begin. Weird.

One of the game-breaking flaws I mentioned is the passing. When you’re playing 2-on-2 games, your teammate is completely computer-controlled, which I found very annoying. That is, you can pass the ball to him, but you can’t control what he does, except for hitting X to have him pass the ball back to you. However, the passing in this game is absolutely maddening. About 95% of the time, you can’t catch a pass while you’re moving. Yes, you read that right: for some retarded reason, you pretty much have to be standing still in order to catch a ball that is thrown your way, lest it fly past you to the other end of the court.

There’s another strange issue, but I can’t think of anything to call it except “ball detection”. I lost count of how many times I was sure I picked up a loose ball, only to shout at my TV, frustrated, that my opponent had gotten to it instead. The rebounding is the same way; maybe I just suck at timing my jumps, but it’s way too hard to get boards in this game. Going along with that, the AI seems to have one hell of a nose for the ball. They always seem to manage to get their hands on loose balls — it’s almost like your opponents and the ball are magnetic or something. 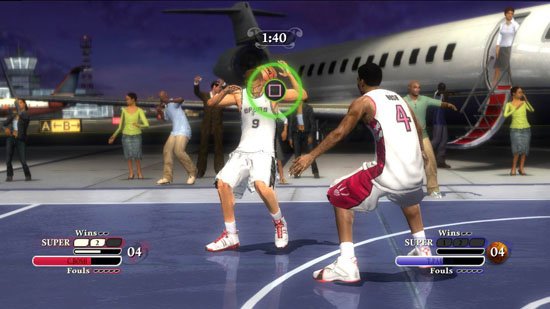 As I said before, this game is missing a few features that are generally standard in sports videogames. One of them is an instant replay system. Are you kidding me? It’s unbelievably sad to pull off an awesome string of jukes and a crazy dunk, only to hear Chuck D yell, “Let’s see a replay!”, and not be able to watch your exploits in slow motion. Hell, the in-game pause menu only has two choices: “Resume” and “Quit”. In addition, there are no difficulty settings in this game. Whether you’re breezing through the story mode or struggling to get by (the latter is far more likely), you have no options to fine-tune the AI or anything else; you’re stuck with what’s there.

And that’s the main problem with this game: it’s far too challenging. The story mode includes some ridiculous games, like ones where you have to come back from a 20-point deficit in four minutes. It’s doable once you figure out the game’s Act-A-Fool combo system, but you’ll definitely be retrying it multiple times. The combo system has you initiate fake-out moves by hitting L1 and square, and then a string of context-sensitive button presses come up on screen (you’ll be hitting either L2, R2, square, X, or triangle; circle will end the combo). Mess up, and you’ll drop the ball (literally). You can string up to 5 moves together, which will add points on to the shot you take to finish the combo.

Another one of the ridiculous story mode game types is the “no checks, no clears” game. For those not down with the street ball lingo, in a typical game, as long as someone’s shot hits the rim, the opponent must take it back past the three-point arc to “clear” the ball. If someone scores, he must “check” the ball to his opponent to begin play again. But in these games, none of that is in effect. And usually, the games are these crazy 1 vs. 1 vs. 1 affairs; they quickly devolve into waiting under the basket for the ball to go in, catching it, and then quickly putting it in — and since the ball seems to be attracted to your AI opponents, you’ll almost inevitably find yourself quickly behind in these games. 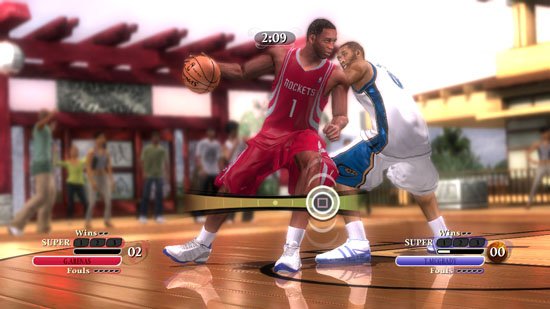 One of the dumbest ideas in this game is the “Shut ’Em Down” move. Basically, you fill a “special” meter by doing well (hitting shots and dunks, and doing jukes), and you can build up three different levels of Shut ’Em Down moves. Level 1 does an automatic steal on defense, and a crazy juke on offense; Level 2 will let you automatically hit a shot; and the hard-to-obtain Level 3 will allow for a Super Dunk, which can be blocked by a Super Block (Level 2). You unlock these moves (as well as new clothes) by winning matches in the story mode, and they all look really cool.

But I hate them because of the way they’re implemented. Each move starts a cutscene that can’t be skipped, and most of them last about ten seconds. This completely stops the flow of gameplay, and it’s really annoying to have to watch your opponent do his thing because you’re powerless to stop him once the cutscene begins. And in a last note of how utterly stupid these cutscenes are, the net doesn’t do anything (i.e., there’s no “swish”) when the ball goes in. Midway got that right in NBA Jam in the arcades; it’s ridiculous to see that now.

In the end, this game only ends up being fun when you’re playing with friends. The online multiplayer has no voice chat (at least, not on the PS3), and I quickly became bored of playing matches with random strangers. The online interface is serviceable, but it’s nothing special. You can either create games, or challenge people in the main lobby. You can set options like the number of rounds in the game, the time of each round, and so on. Unfortunately, I don’t have a second PS3 controller, so I was unable to try the game out with any physical friends in my room. If you’re in the same situation (and probably even if you’re not), don’t bother with this game.

Score: 3.5 (Bad. Some aspects are terrible; others are either so-so or kind of fun.)