Outside the realms of anime and manga fandom, games based on Masashi Kishimoto’s Naruto (made popular by the Cartoon Network series and Shonen Jump manga publication) don’t usually draw the attention of the mainstream gamer.  Like with other licensed titles, some gamers assume that if they don’t care for the movie/show/comic, the probably won’t find much to enjoy in the video game. But, if you were to look underneath any game’s licensed characters, art, or music, you would find that a game is a game, and it’s not out of the question to think that a genuinely good licensed game can be made. What if I were to say that Naruto: Ultimate Ninja Heroes is one of the best fighting games available for the PSP? Would non-fans be willing to look past the fact that this game originated from an anime license?

Hit the jump to read this review of Naruto: Ultimate Ninja Heroes.

At Naruto: Ultimate Ninja Heroes’ core lies a three-on-three fighting game tournament where you battle with one of the three characters you’ve chosen from your team against the opposite team’s choice. Should you be defeated, a second teammate replaces the first, and the team with the last person standing wins. The goal is to use your team to battle against several teams that become increasingly difficult, eventually becoming the Ultimate Ninja Heroes. The game’s Heroes Mode is the main feature, and in it you can choose one of several pre-set teams of three, or build a team of your own individual character choices from a pool of almost two dozen Naruto characters. 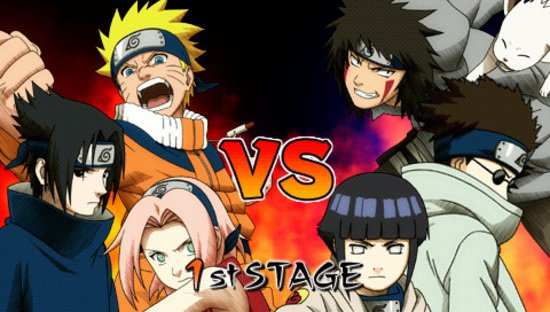 Before jumping into battle, you’re asked to choose a battle order for your three team members. Each of the team members also possesses special skills that can be used before battles. These skills range from basic healing to blocking an opponents special powers. This feature gives the game some strategy elements, and careful choices can really make a difference in the difficult end battles.

The fighting controls are fairly simplistic, but when you experience how fast-paced the game play is, you’ll be grateful that button combinations have been kept to a minimum. There’s only a couple of attack buttons, and variations are executed with d-pad movements. Basic jumping, attacking, and blocking usually take place, and once your Chakra Gauge is filled, an over-the-top Secret Technique can be executed with a simple two button command. Most of the game play consists of fending off attacks and hopping to one of each levels’ multi-plane battlegrounds to build up enough Chakra to finally execute one of these Secret Techniques. Again, it’s a bit simple, but that simplicity makes it a lot of fun. 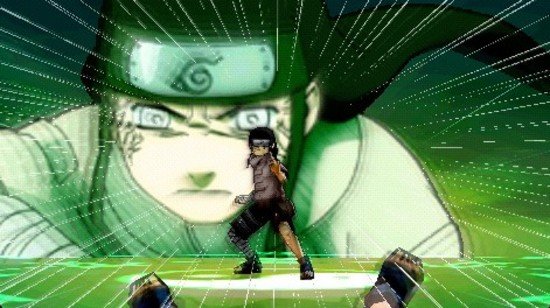 It has to be said that some of the battles are quite difficult. I think that this mostly has to do with the fast-paced action (they’re ninja, you know) and the quick responses that are required. You get a real sense of frantic chasing, and in the latter battles, it feels like you’re using everything in your ninja arsenal to stay alive and push forward. This makes for a quick-paced and ultimately satisfying portable fighting experience that’s just challenging enough to have you coming back for another fight.

There are other strategy/role-playing elements that I found out of necessity. About half way through the Heroes Mode, I hit a wall, and my team (Team Guy) wasn’t able to defeat the opposing team. I eventually found that I was supposed to use points awarded from previous battles to level up my character’s abilities (power, defense, speed, and so on), thus enabling me to take on the stronger teams. After a couple of power boosts, I was able to defeat a few more teams, but again, they didn’t go easy on me.

Like many other modern fighting games, the completion of the Heroes Mode unlocks new characters, levels, battles, and even movies to view. You can head back into battle with your newly powered-up team, or build a new one with your freshly unlocked characters, taking on even more difficult battles in the new unlocked game modes. 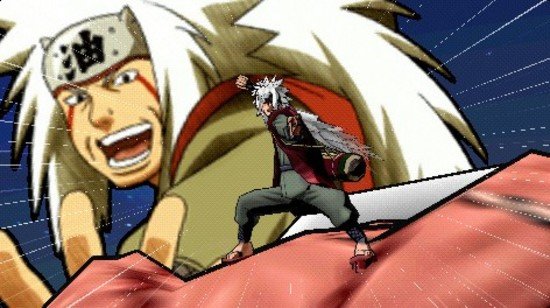 Aside from this Heroes Mode, there is a basic one-on-one Vs. CPU mode straight out of any fighting game, and a mission-based Promotion Test mode. Naruto: Ultimate Ninja Heroes also supports wireless game play, even adding in a game sharing mode for opponents without a copy of the game.

Naruto: Ultimate Ninja Heroes looks polished, but looks haven’t been an issue for any of the recent Naruto games. The cell-shaded characters look just like the do in the anime, just as you’d expect, and the various stage backgrounds all look great. Some of the character’s animations are downright impressive for a portable game, and the special effects sparkle on the PSP’s screen. The flashy animations for each character’s Secret Technique are visually impressive (and totally over-the-top), and fans of the anime will definitely be pleased. 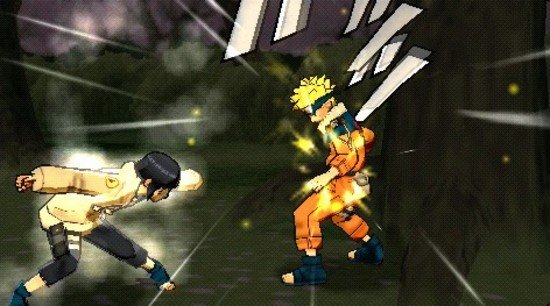 As fun as it is, Ultimate Ninja Heroes is not without its faults. Even though the PSP screen does a good job of keeping up with the fast action (surprised?), sometimes the action gets a bit small and difficult to see. The game’s camera follows your character around, making smart zooms to bring you into the action, but the fighting that takes place on some stages’ back planes is just too small to see clearly. Another visual problem sometimes arises when the action is stepped up. With various flying weapons, clouds of smoke, flying power-ups, and two crazy ninja hopping about, it’s sometimes difficult to see exactly what’s going on. A quick hop to the closest plane fixes that, but sometimes the heavy action doesn’t permit this. Finally, the pre-battle load times are standard PSP fare, which means that they’re not great. Things never go past about 5 seconds, but when you’re ready to go back in and fight for revenge, even 5 seconds is a bit aggravating. These are all minor gripes, and when you’re knee-deep in throwing stars, you don’t have time to sweat the small stuff.

Naruto fan or not, PSP owners should find plenty to like in this portable brawler. Its simple and approachable game play is a bunch of fun, and it’s hard to beat the feeling of landing that Special Technique to finish off a foe that has been giving you trouble. Forget anime, manga, or even licenses — Naruto: Ultimate Ninja Heroes is a blast to play, and you’ll be hard pressed to find better fighting action in a portable package.