Hey, there’s nothing wrong with updating a great Flash game and porting it over to other platforms. Hell, it worked out really well for Metanet Software’s N; when Anthony Burch reviewed the Xbox LIVE version, N+, he gushed over the title, calling it “the ultimate indie platformer.”

Now the title makes its way to both the Nintendo DS and PlayStation Portable as, well, N+. After playing the Nintendo DS version for over a week, I can safely say that yes, N+ on Nintendo’s handheld is a fun, addictive platformer. But does it warrant the “absolutely a must buy” Anthony gave the XBLA version?

The concept of N+ is simple: it’s a platformer without all of those pesky story elements or offensive maneuvers that characterize most modern games. If there is a narrative, you’ll have to make one up, so here’s my take: you are a ninja who must raise money in order to save an orphanage by collecting valuable golden orbs while navigating dangerous terrain. Or, you’re trying to pay off student loans to pay off ninja college.

Whatever the case is, N+ throws over 200 different levels at you, all of which must be navigated by moving and jumping. And that’s it. It’s all absurdly simple, but its solid controls and momentum-based physics jumping work well and feel great with the DS directional pad. The game’s challenge comes from the deceivingly difficult level layouts, which include lasers, mines, and other generic booby traps designed to keep you from your goals. The difficultly ramps up significantly as you progress through the levels, initially introducing you to very basic game concepts, eventually escalating to areas that seem near-impossible to negotiate. 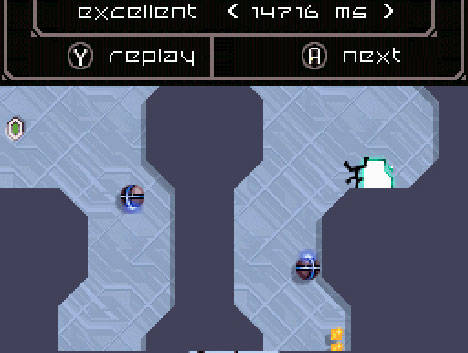 But here’s the great thing about N+: even when you die — exploding on a mine or being bounced around the stage like a rag doll — you always feel like it’s your own fault. The controls and in-game physics are precise and predictable enough that when you screw up, there’s clearly no one to blame but yourself. Sure, this can be tough on your ego, but it encourages perfecting paths through areas, and completing a particularly tough stage is immeasurably gratifying.

Regrettably, beyond personal satisfaction, there’s not much that would have you pushing for that perfect level run-through, collecting all of the game’s gold nuggets. The game does maintain statistics, but not for individual levels; there seems to be no way to see how well you’ve done on levels you’ve cleared. You can’t see how many gold pieces you missed, your total score, or the time it took you to complete any given stage. It’s because of this that I felt no reason to do anything more than push from start to finish of each level, with no desire to really return.

It’s a good thing that the game not only features a full-featured level editor, but also a way to connect to the Nintendo Wi-Fi network to download and play user-created areas. Not only does this feature open up theoretically-endless replay value for N+, but it also keeps better, more motivating statistics than it does for the levels the game ships with. When connected to the network you can see not only who created it, but not many times a level was played, how many times it was successfully completed, and your own best time. Additionally, levels can be rated, so if you want to sort through the crap you can (and considering the relative ease of use of the level editor, there most certainly will be crap). 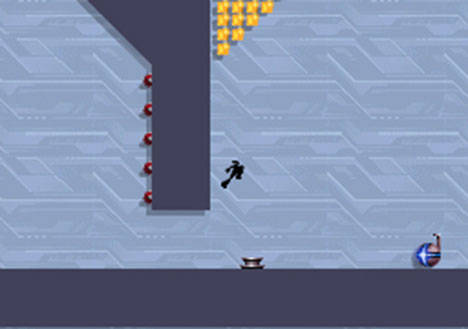 N+ can also be played cooperatively with another ninja or competitively with up to three other players, but with only one cart, testing these modes wasn’t possible. Co-op is a straightforward affair, with two players working towards a level’s exit. Competitive modes include Domination Mode (own as many switches on a level within a given time limit), Tag Mode, and Blitz Mode, where players race towards a goal.

Visually, beyond the smooth animation of the game’s skinny ninja, N+ doesn’t necessarily impress. It’s mostly flat colors, with more shades of grey than anything else, and sharp, even angles comprise most of the game’s rooms. You can view and play the game on either of the handheld’s dual screens — one displays a wide, zoomed out view of the map, with the other giving you a closer look at the action.

Regarding the game’s music and sound effects, the best I can say is that it sounds like a videogame, which is not necessarily a good thing. “Bleeps” and “bloops” characterize most of the game’s sounds, which would be fine if you were listening to them against a bed of listenable music. Unfortunately, the game’s soundtrack is abysmal and grating, probably the most obnoxious I’ve heard in a title in quite some time. Let me clarify: the music itself isn’t bad, with some pretty hot 8-bit beats and potentially catchy melodies. The problem: each piece of music is no longer than 15 seconds long, and will continually loop itself to the point where you’ll be forced to turn down your sound before you’re carted off to an insane asylum. Fortunately, the game gives you the option to cut the music altogether (and I believe that it’s the default option). 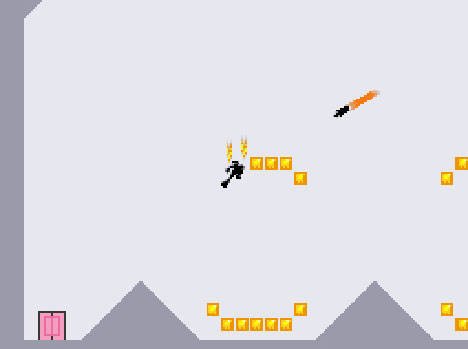 Overall, N+ on the Nintendo DS is a fun, polished game for what it is … a collection of obstacle courses. But it’s a polished and tight experience, to be sure, although I do feel that the game could benefit from having a tighter overall goal structure versus an open series of mini-challenges. Still, for those looking for challenging, bite-sized gameplay, N+ contains some of the best you’ll get on the DS.