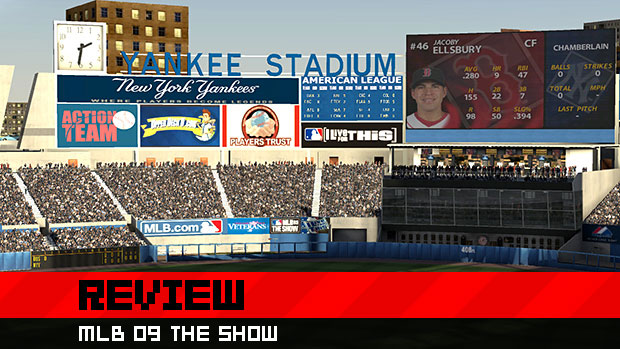 The start of the 2009 Major League Baseball season is less than two weeks away, and I couldn’t be more excited. The World Baseball Classic, which ended in a thrilling 5-3 extra-inning victory for Japan over Korea last night, helped get me “back in the mood,” so to speak. But what really kick-started that progression away from football — which I spent the majority of February thinking about — and toward baseball was the release of Sony’s MLB 09 The Show in the first week of March.

2K Sports may have an exclusivity deal with Major League Baseball, but luckily, it only applies to third-party developers — so for the fourth year in a row, PlayStation gamers have the option of Sony San Diego’s title. Last year’s game, MLB 08: The Show, was extremely well-received — much more so than its counterpart from 2K, Major League Baseball 2K8. So did Sony build on the success of MLB 08, or is this year’s iteration a step back for the franchise? Hit the jump to find out.

[Editor’s note: All screenshots in this review were taken by yours truly, thanks to the game’s nifty “Save Screenshot” feature. –Samit] 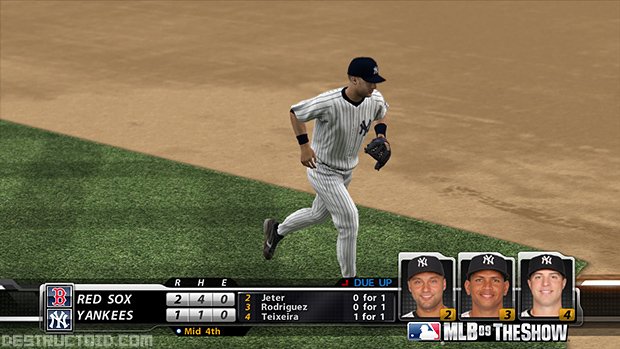 In simulation sports games, the little things are what matter the most — and Sony San Diego’s steadfast attention to the most minute, specific details shines through in every facet of MLB 09 The Show. For example, after completing a game at Citi Field, the New York Mets’ brand new ballpark, I was amazed to hear the PA announcer tell exiting fans how to get to the Long Island Rail Road (namely, to look for signs for the Port Washington line). That kind of specificity may seem excessive and unnecessary, but it definitely helps make the game feel more realistic, which is what all sports sims aim for. And as for on-field inclusions, I was ecstatic to see Derek Jeter’s trademark jump throw from the hole.

Of course, a developer can afford to entertain such local concerns when the core gameplay doesn’t need all that much work — and that’s the case with MLB 09. Since MLB 08 provided such a fundamentally sound foundation, Sony was able to focus on polishing the experience to an even higher level. The pitcher-batter confrontation, as the studio likes to call it, has never been better or more realistic. This year, the CPU plays much more like a team of humans than a mere group of robots. It’s easier to strike out the computer, since they’ll actually chase pitches out of the strike zone this year, and the pitching AI isn’t completely accurate all the time, so you can finally draw walks. I still think that the variable strike zone the game offers — there’s a variety of umpires, each with his own unique strike zone — tends to result in a tad too many missed balls and strikes calls, and sadly, that’s not adjustable with a slider. But that’s literally my only complaint with how pitching and hitting work. 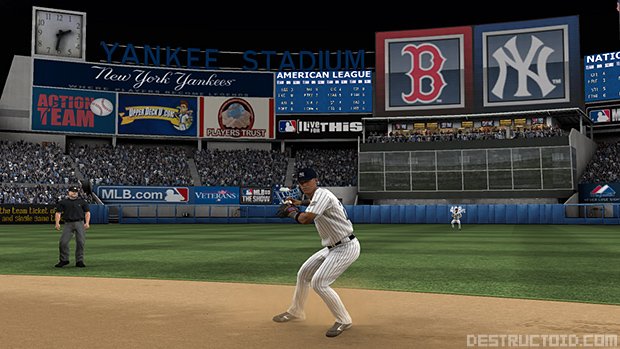 An area where major tweaking is evident is fielding. In previous iterations, hitters would often be robbed of an extra-base hit because outfielders would run directly toward balls (that is, they’d “know” where the ball would end up, so they’d just run straight to that spot — and that led to less aggressive base runners, which meant that would-be doubles became singles, for example). This time around, fielders take realistic routes to the ball, like “rounded” paths to balls hit down the line or in the gaps, so nobody gets thrown out at first base from right field anymore. And since the game features hundreds of new animations for things like tags and double play turns, every fielding instance looks and flows better. There’s also a “hotshot” system in MLB 09 to account for balls that are smashed at defenders, so lower-rated fielders will have a higher chance of missing or bobbling a play — whereas previously, fielders would pretty much catch any ball that was hit at or near them.

Yet again, Sony’s baseball franchise provides visuals that are simply unparalleled — the developers have really outdone themselves with a fabulous all-new lighting model. I started a night game and was initially confused as to why it looked like a day game, but as the game wore on, I realized that it had begun at dusk and the sky had gradually darkened over the course of the game. When playing day games, you’ll see shadows creeping up behind home plate during the later innings. Player builds and faces are so accurate that you can recognize your favorite athletes from zoomed-out flyovers, and they’ll grimace when appropriate, like when they strike out or slide into a base. If you look closely in a replay, the pitcher will even have a grip on the baseball that corresponds to the pitch he threw. Keep an eye out for your team’s mascots, too — Mr. Met, the Phillie Phanatic, and others will make an appearance in cut-scenes. The combination of graphical fidelity and detail-oriented design in The Show is absolutely mind-blowing.

There are a few chinks in the armor, though, and they’re conspicuous because everything else is so highly polished. The one glaring, egregious issue — and it’s something that has been around for a few years, yet still hasn’t been addressed — is collision detection. Players still clip through each other in every instance; as a pitcher in Road to the Show, I’ll stand in a runner’s way for fun because it’s mildly amusing to see him speed right through me. Even in Triple Play ’96 back on the Genesis, a collision between two players would knock them down. In addition, while the crowd is lively and wears team-appropriate clothing, fan models repeat far too often. That alone wouldn’t bother me that much, but their animations are all coordinated exactly — for example, every blue-shirted guy in a white hat in the vicinity of a foul ball will reach for it at the same time. Merely staggering the animations seems like a simple fix. Finally, the game’s depth-of-field filter is rather weak. 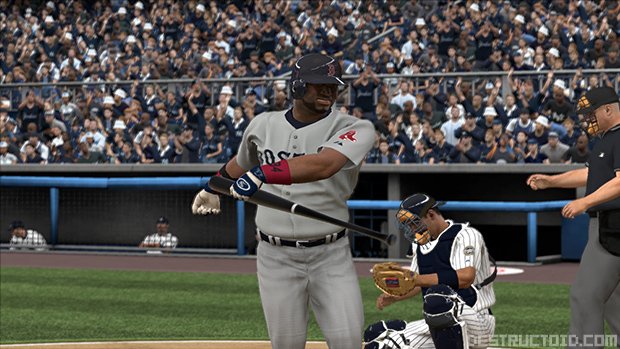 MLB 09 brings plenty of new content as well, though much of it is tailored to the hardcore audience. The Franchise and Season modes grow ever deeper with the addition of 40-man rosters, September call-ups, salary arbitration, waivers, and both the amateur and Rule 5 drafts. (If you’re not familiar with those terms, the game includes a Transaction Handbook with definitions.) Sounds of the Show allows you to record custom chants and yells (“A-Roid”? “A-Fraud”? it’s up to you), and My MLB Music lets you edit music (from the indie rock and hip-hop soundtrack or your PS3’s hard drive) to create batter walk-up, reliever entry, or home run song clips. Pressing the L3 button at any time during a game or replay will begin recording; the game outputs an MP4 to your hard drive. And for the best of the best, there’s an insane new difficulty setting, “Legend.” You’ll really have to bring your ‘A’ game to compete.

The main attraction for me is Road to the Show, the RPG-like mode where you create your own player and take him from minor-league bum to major-league superstar by playing and earning points to increase his attributes. Just like the Be A Pro mode in NHL 09, RTTS does a phenomenal job of putting you in the cleats of your player. When it’s your name on the back of the jersey, and it’s you who is in danger of being traded if his performance doesn’t pick up, you’ll care about what happens. And that’s the magic of RTTS: you legitimately become invested in your player’s career like you would become fond of a party member in a JRPG. This year’s version of the mode features analog stick controls for leading off and stealing bases, which is an improvement (though it takes some practice). There are also more interactions (“Talk to your manager about his decision to pull you from the last game”), and for hitters, the new practice mode lets you hone your skills.

Online play is also vastly improved in MLB 09. The lag in my first game made it nigh-unplayable at times, but that turned out to be an anomaly; I only had a scant few scattered instances of slowdown from then on. But if you are sucking it up, you don’t have to continue suffering. If your connection is the issue, you can choose the “Friendly Quit” option, and if you’re just getting your ass handed to you, you can concede victory (in both cases, your opponent will have to agree to ending the game early). The game also offers online season leagues, with full draft options and flex scheduling to play games ahead of schedule if you want. If you’ve got enough friends who are really into the game, this is definitely the way to go. 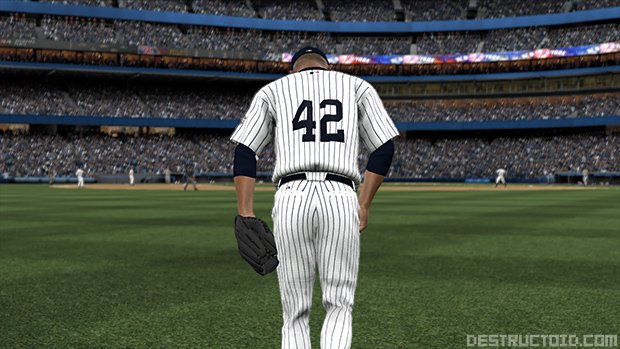 Other than the new baserunning controls, nothing has changed on that front. A few gamers have taken to criticizing the developers for not trying analog stick controls, but I don’t fault Sony for not messing with a system that works so well. Change for the sake of change often ends up hurting a game rather than helping it, and while I don’t think that the team shouldn’t at least consider a control scheme other than the button-press pitching and hitting, the current setup provides an experience that is second to none. This manifests itself in the improved hit variety — if you’ve ever seen it happen in a real baseball game, it can happen in MLB 09.

MLB 09 The Show adheres to the age-old adage, “If it ain’t broke, don’t fix it,” and that is its greatest strength. Rather than implementing changes in the name of innovation or back-of-the-box bullet points, Sony San Diego has refined the winning formula of MLB 08 in nearly every imaginable way, and they’ve delivered the best version of The Show yet. But for those who shudder at the thought of plunking down $60 for a mere “update,” the game certainly brings enough significant improvements and additions — especially for the hardcore fan base — to justify a purchase even for owners of MLB 08. It’s just a shame that baseball fans who don’t own a PS3 can’t enjoy what is, far and away, the best baseball game on the market for the second year in a row.

Oh, and just for fun, here’s a video I captured of Mark Teixeira taking Jon Lester deep to left center. Enjoy! (The crowd noise doesn’t correspond to the home run because I viewed the replay after the next hitter had already come up to bat; it’s “current,” so to speak. And in case you’re wondering — yes, I did beat the blasted Red Sox. The final score was 6-3; Joba got the win, and Rivera got the save.)