Earlier this month, Meteos Wars hit Xbox Live Arcade. Meteos is an action puzzle game, designed around a few simple mechanics that function well together. It was originally released on the Nintendo DS way back in 2005, before the television or the Internet were invented.

The game is developed by Q-Interactive, of Lumines fame. Much like Lumines, Meteos Wars combines a sharp presentation with solid mechanics. It also has the ability to become rather addicting. I actually quit doing lines on my coffee table as a result of obtaining this game — and that’s saying quite a bit. Even that scene in Robocop with the hookers and grenade didn’t have this much of an effect on me.

Conrad and I spent many hours playing this game. The majority of those hours consisted of Conrad beating me senseless in the competitive mode. Although he won’t be with me to share his thoughts on the game, he’s with me in spirit. Always. 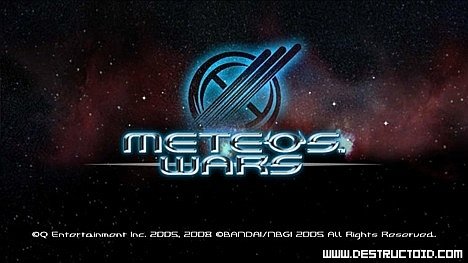 Q-Entertainment’s Meteos Wars is a quick-paced puzzle game designed to make me feel like a moron. Meteos should be familiar territory to any puzzle game enthusiast. Stacks of insignia-laden blocks fall and pile up on the screen. Your objective is to maneuver and clear these boxes by creating three-of-a-kind horizontal or vertical matches. The game is over when the blocks pile up to the top of your screen for too long.

After starting a match, the blocks are hoisted into the air by way of rocket boosters, and that’s where the game’s “gravity” factor enters the fray. If there are too many blocks on top of your original match, the rockets won’t propel blocks completely off of your screen. Thus, it is your job to clear more blocks to lighten the load and obtain bonuses that will skyrocket the nasty puzzle payload to your opponent’s screen. 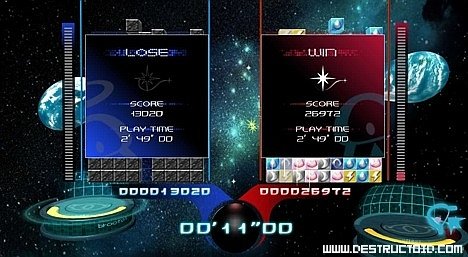 Meteos is built for two people — even the mission-based campaign mode makes that clear. Instead of competing against yourself, the game sets you against artificial intelligence that rarely throws you a bone, even on the game’s Easy mode. The AI’s conduct is easily explained by the player (and AI’s) ability to speed up time. The foremost reason to use ‘speeder’ is to screw with your opponent’s ability to create matches. When you rocket your blocks into the next screen and it looks like he is in trouble, you can speed up time to usher in his downfall. Speeder affects both screens and can be used by either player for any amount of time. It creates an interesting dynamic of interchanging speed that I believe has a tendency to make the game much more interesting than it really is.

Meteos requires fast reflexes to begin with, especially when your screen starts filling up and you’re firing blocks all over the place. The speeder makes it all the more frantic. While definitely interesting, the pacing can also lead to an unsatisfactory experience. Games rarely last more than three minutes, and if you’re not looking to play Meteos in chunks (which occasionally I’m not) you’ll leave matches unfulfilled. 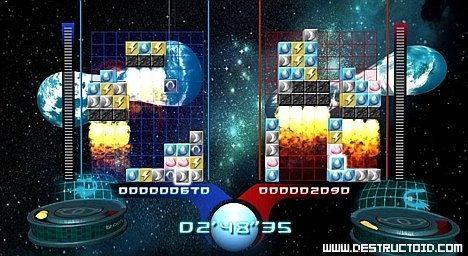 I can’t necessarily speak for the Nintendo DS version of the game, but I think it’s important to note that the inputs for this version of Meteos are occasionally too slow for the task. You move between columns with the analog stick and flip blocks with the right stick. It’s easy, but because of the pacing, the controls can be a hindrance. Often, the game expects you to see the entirety of the blocks at once in order to make the best decision possible. The problem is getting over to a trouble spot before the time runs out. There are numerous occasions that I’ve lost a match, even though I saw what I needed to do, because I couldn’t get the cursor to cooperate quickly enough.

There are negligible story elements at play, but the key is that you control an avatar that has the ability to use a planet’s inherent abilities. Every planet has a unique modifier that plays on the gravity concept. Some planets require more effort to boost blocks (but the payload is larger), and some allow for quicker displacement. Different planets also have different visual styles. The key is finding a planet that matches the style of play that you want. I found this to be a great addition, simply because the game’s visuals never seem all that familiar if you are willing to switch up the avatar every once in awhile. 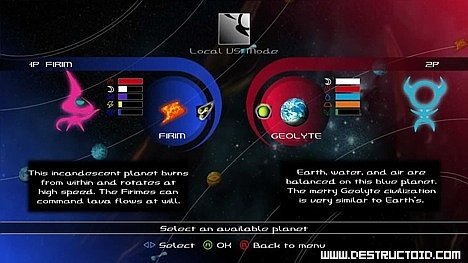 Every planet has an attack that can be initiated by filling a small bonus bar. These attacks are modifications on your opponent’s gravity or generally screwy things that can mess up potential matches. There are also bombs that randomly drop into your picture. They eviscerate rows or diagonal patterns and send them over to your opponent’s screen as well. Couple this with the speeder and naturally quick gameplay and you’ll notice that Meteos isn’t exactly the kind of game you can chill out with.

Like most XBLA titles, Meteos doesn’t offer too much in the way of modes. The single-player component has mission (which allows for additional avatar unlocks), time attack, and versus modes. Multiplayer consists of local and network versus matches. The lack of different modes or even a fully fleshed out multiplayer component leaves me wanting much more.

Meteos Wars is a fast puzzle game that has a refreshing presentation and good gameplay execution, but it lacks substance. The visuals are sharp and the different avatars contrast each other well. The sound and musical components aren’t repetitive and may even get you to turn off the lights and dance around with glowsticks in hand. The biggest failings in Meteos are the lack of modes, and to some extent, the duration of the matches. Meteos accomplishes everything that a puzzle title should and could be immensely entertaining for fans of the genre. At the same time, the pace may not be your cup of tea. Do yourself a favor and demo this before you buy.