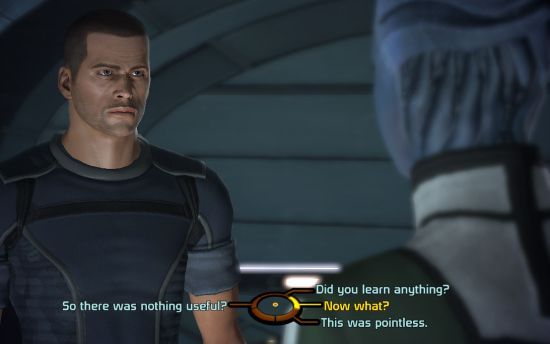 Better late than never — yeah, Mass Effect‘s been out for a couple of weeks, but you wouldn’t dare pass up a chance to hear what we (reasonably honest) folks at Destructoid would say about BioWare’s latest epic action-RPG, would you?

Equal parts Firefly, Star Trek, and Star Wars, BioWare’s most recent effort seeks to be the be-all and end-all (or, considering it’s the first in a planned trilogy, the be-all start-all) of story-driven, sci-fi action videogames. Generally, reviews have been pretty damned positive, but it still seems difficult to hear Mass Effect brought up in friendly conversation without also throwing around words like “disappointing,” “flawed,” and “what the hell were they thinking when they designed the Mako controls?”

Is Mass Effect a flawed masterpiece, then? No masterpiece at all? Crap? Genius? A mixture of the two?

Here is the secret to enjoying Mass Effect: lower your expectations.

Mass Effect is not a revolutionary RPG — hell, it’s not even particularly innovative. It isn’t a sprawling 40-hour epic, it doesn’t include particularly great action, and it won’t change the way we handle dialogue trees in role-playing games. Given how revolutionary Mass Effect seemed during its initial announcement, these realities may be hard to face — but, like all crushing truths, you’ll have to come to terms with them eventually.  Once you do, of course, you’ll be much more likely to have fun with this flawed, but enjoyable action-RPG. 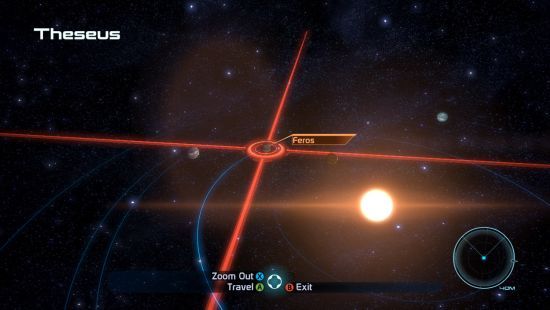 The story follows ____ Shepard (you supply the first name, gender, skills, and personality) as s/he gallivants around the Milky Way galaxy attempting to find and stop a rogue Spectre — imagine a Jedi, but without a lightsaber or force powers or forced morality — named Saren from destroying the galaxy.

How do you stop Saren, one might ask? By shooting stuff, primarily. Hell, almost only by shooting stuff. Unlike KotOR or Neverwinter Nights, Mass Effect‘s quests seem to focus solely around the realtime combat system. A few sidequests and conversations can be solved with Charm or Intimidation techniques, but this game is most definitely an action-RPG — BioWare fans, be ready for that.

Also be ready to spend the first three to four hours of the game cursing the developers for implementing such an oddly paced, seemingly-complex fighting system with almost no tutorial. Mass Effect tries to split the difference between slow, deliberate tactical 3rd-person-shooter gaming and fast-paced shoot’emup action; the player’s aim and shooting speeds are very slow, but the enemies can be very quick. It’s a weird decision, to be sure, and it definitely doesn’t work as well as it should. The cover system is totally automatic (a la Kane and Lynch, where it didn’t work either), the button mapping makes no sense, and, though you can issue specific attack commands to your teammates while paused, the game doesn’t even tell you this is possible, much less how to do it. 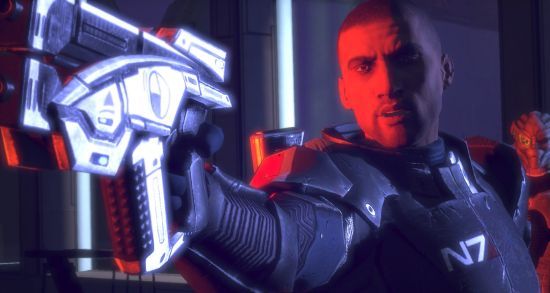 In fact, nearly everything, from the menu system to the combat to the godawful Mako driving levels, are thrown at the player without any explanation or help. BioWare just presents a bunch of ideas to the player and then walks away, leaving you to flounder around for an hour or so until you get your bearings.

Graphically, the game is gorgeous — once you get past the numerous visual bugs, that is. I’m not the sort of guy who notices texture pops too frequently (I didn’t even know what they were until Mass Effect), but Mass Effect‘s texture pops are so frequent and noticeable that you’d think you were playing a beta rather than a finished product. The dialogue scenes are one of the best parts of the game, but it can be difficult to emotionally connect yourself to a character when they seem to be, you know, missing half their face for the first few seconds of your conversation. Generally, though, Mass Effect subscribes to the “in the future, everything will be shiny” school of science fiction and when it works, it works; the pristine, almost sterile human environments go a long way in setting a fantastic, larger-than-life tone for the whole package.

But speaking of the conversation system, it’s worth pointing out that BioWare was flat-out lying about some of its aspects. While the analog stick-controlled response system is certainly a much more intuitive and cinematic method of handling dialogue trees — the conversations have a great flow and rhythm — interrupting people or choosing dickish responses almost never results in different outcomes. You can interrupt someone every single time they open their mouths, and the conversation won’t play any differently than if you’d patiently waited for them to finish every statement before jumping in with your own questions. On one hand, this isn’t such a bad thing (I don’t know if I’d want to be forced to listen to every single line of dialogue in its entirety), but BioWare still failed to deliver on their promise for an innovative, interactive new approach to NPC conversation. 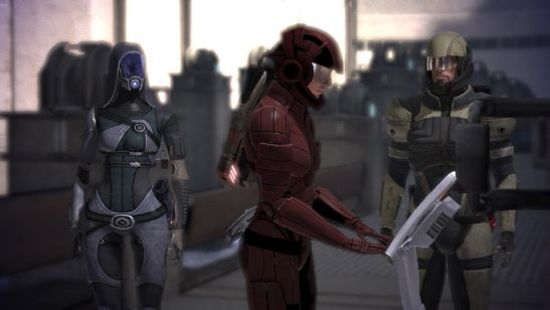 It may sound like I’m being overly negative, but these are just the flaws which will jump out at the overtly hopeful gamer within a few hours of play. However myriad or obvious these flaws may be, I don’t mean to suggest that the game doesn’t have some truly enjoyable aspects — it does. They just don’t really make themselves apparent until four or five hours into the game.

The story, for example, might initially seem like your typical “kill this guy and save the galaxy” videogame nonsense, but it’s made much more interesting and involving due to how well the characters are developed. Ashley, for example, at first seems like your typical badass videogame heroine; depending on how you progress through the game, however, Ashley will soon seem less like a badass chick with a heart of gold and more like a brutal racist who takes just a bit too much enjoyment out of exterminating bad guys. Similarly, Wrex the krogan, Liara the asari, and Kaiden the human all initially seem to fall into established videogame cliches, but they evolve and develop in unexpected and utterly satisfying ways.

Thanks to the modest dialogue, well-paced conversations, and fantastic facial animations which manage to stay juuuust outside of the uncanny valley, the characters add a lot more legitimacy to the plot than it really deserves. Hell, when you enter an elevator you’ll hear your two allies get into conversations about themselves; the conversations never repeat, and they’ll always be different depending on which two NPC’s you’ve chosen to accompany you. I’ve rarely seen a videogame give such attention to character before, and I’d sure as hell like to see more games follow suit. And when you care about the characters, the plot feels much more meaningful and epic: what begins as a boring exercise in galaxy-saving quickly turns into a character driven space opera with some political commentary and one or two tough moral choices (which are so interesting that there should have been way more of them a la The Witcher; still, I’ll take what I can get). 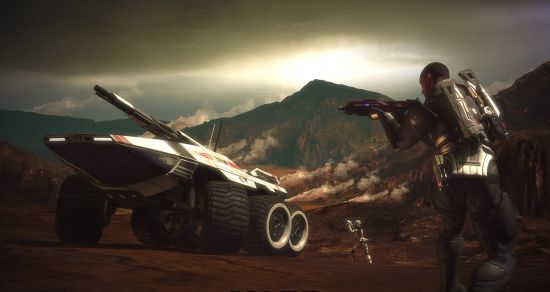 With the characters, story, and atmosphere being so strong, it becomes somewhat easy to overlook the game’s myriad faults. Don’t get me wrong: I find it absolutely unacceptable that I even be required to overlook such obvious faults as the inventory system or the Mako driving levels, but — whether I wanted to or not — I found myself getting used to the oddly paced combat, to the point where I was actually enjoying it by the game’s end. Once you find a strike team you’re really happy with and a weaponry setup which corresponds to your style of play, you’ll be happily watching as Liana throws a Geth trooper into the air with her biotic abilities, only so you can shoot the damned thing in the chest with a shotgun blast. The friendly AI is surprisingly good, and I found myself pleasantly relying on Wrex and Liana more and more as I progressed through the game; the combat is still horrendously flawed, don’t get me wrong, but it’s very easy to enjoy yourself once you finally ease into it.

Oh, one final note: Mass Effect is hilariously short, for an RPG. I completed about 75% of the sidequests in the game, and I still finished the main storyline in less than 16 hours. The game’s brevity alone is enough to make this a rental rather than a purchase, unless you’re the type who loves to replay RPGs over and over so you can see the consequences of choices you didn’t make the first time around. Still, while 16 hours is a pretty short amount of time for a galaxy-spanning epic RPG, by the time I’d reached the end I felt utterly satisfied with the story turns* and sufficiently pleased by the difficulty of the (admittedly stereotypical) final boss.

All in all, Mass Effect is a good game which will disappoint nearly everyone who plays it. Immensely flawed in its design choices, but absolutely fantastic in its attention to character and atmosphere, Mass Effect is enjoyable, but not a masterpiece; entertaining, but not revolutionary; epic and emotionally involving, but disappointing. It is not a great game — but it is, generally, a good one.

*In this context, “story turn” means “cut scene where my virtual avatar had sex with a blue-skinned alien”