As someone who loathes even the theoretical concept of athletics and is unable to play even a round of Texas Hold ‘Em over XboxLive, I’ve gotta admit that I wouldn’t consider myself the most — shall we say — qualified person in the world to review the new, Wii-exclusive installment in the Super Mario Strikers soccer series.

But I sure as hell know a good party game when I see one. After collecting three of my friends to test out the intricacies of Mario Strikers Charged‘s multiplayer and singleplayer modes, I got a pretty good understanding of the game — and my opinion of it is probably a lot more positive than one might expect.

Before getting into what I can review, it’s worth point out what I can’t. As I am wholly incapable of playing any console games online, I could not test out Charged‘s online multiplayer mode, which evidently supports up to eight simultaneous players and is, for all intents and purposes, one of the package’s major draws

Should the online work as intended, however (that is to say, no lag, no dropout, etcetera), it should be more than enough to convince even the most jaded Wii owner (do those even exist?) to purchase Mario Strikers Charged. But more on that later.

Graphically, the game is great once the camera zooms in for player closeups (like when a character executes their superpowered multistrike, or after a goal when the camera captures a character’s victory celebration), but they leave a bit to be desired during regular gameplay. I say this not because the environments and effects aren’t bright and attractive (they are), but because when two teams whose captains share a common color scheme (say, if Yoshi squares off against Luigi), it can be very difficult to tell who is who. One team does get some red clothing, but considering Yoshi’s GREEN head and Luigi’s GREEN clothes are the most prominent parts of their respective bodies, telling one team from another can get tricky — more tricky than it should be, anyway. 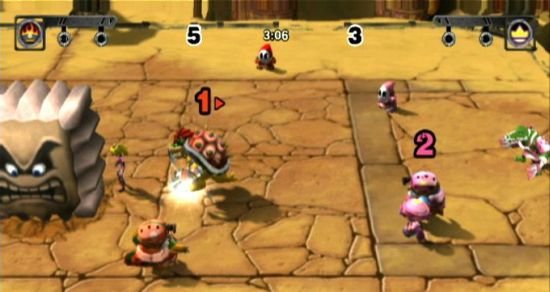 I have not played any of the previous Strikers games, but I played with a friend who had — he (who will henceforth be referred to as “Grant,” because that’s his name), however, assured me that there had been many significant changes between the last Strikers title on the Gamecube and this newer Wii version — namely, that the goalies are a hell of a lot more efficient in regular play. Where the player used to be able to get along easily just by combining two or three lob passes with one well-timed shot to get a goal, the player now has to rely heavily on using special shots, items, and multistrikes. For old fans, this might be a double-edged sword: it gives the game a new pace and urgency (speical shots and multistrikes are activated by holding the B button down for a few seconds, which leaves the player wide open to attack — as such, a great deal of any good offensive plan is setting up defenders to tackle anyone who comes near the shooter), but it also feels a bit less like “real” soccer.

Still, keep in mind that I’m saying this about a game where the team captain’s special move involves jumping into the sun, turning into a demon, and firing up to six soccer balls down at the goalie.

This new mechanic is called the multistrike, and, from a defensive point of view, it’s one of the only things in the game that actually uses the Wiimote (apart from tackling, which is activated with a quick waggle of the remote). Basically, the captain finds an open spot and holds the B trigger down for a few seconds. After fully charging up, a Ball Meter appears, where the player has to time another press of the B button in order to determine how many soccer balls will be fired at the goalie. After determining the number of balls, the final speed meter appears to determine just how fast the balls with come. The captain then initiates the aforementioned multistrike animation and shoots the balls at the goalie, who (if the defending team is controlled by a human) then has to literally “catch” the balls by using the Wiimote pointer as they rocket towards the screen. It’s simplistic, but it adds a really nice layer of interactivity to the multistrike mechanic that would have otherwise been totally CPU-controlled. Again, though, this is all assuming that you are playing against a human. If a player does a multistrike against an AI-controlled team, the goalie’s ability to catch the multistrike balls is simply calculated based on the supposed skill level of the AI team. 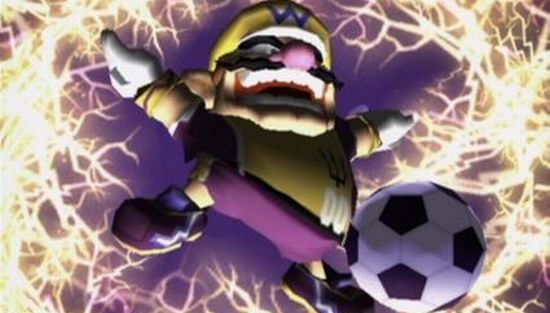 This brings me to one of the game’s few major flaws: the singleplayer experience. Whereas playing the game in multiplayer is an exercise in skill versus skill, the enemy AI in the singleplayer campaign isn’t particularly bright — so, to compensate, they’re extremely lucky. Anyone who has played a Mario Party game against computer-controlled characters should be more than familiar with this. AI enemies seem to get much better items resulting from unprovoked tackles, and their goalies seem to get unrealistically good at using and defending against multistrikes — in the latter levels of the trophy campaign, my friends and I (the trophy campaign can be played cooperatively) often found ourselves initiating perfect multistrikes, only to have all six shots instantly blocked by the absurdly lucky AI goalie. With multistrikes no longer an option, we had to rely on the special moves of supporting characters, and the hope that any one of our random shots might make it into the goal. Once the enemy AI gets so good that multistrikes become useless, the game feels much less satisfying — and since the enemy can still execute perfect multistrikes and benefit from them, the matches feel unfairly one-sided.

Not to mention the unfortunate fact that progressing through the singleplayer mode is necessary to unlock other characters. This is pretty much par for the course in comparison to other Mario games (Mario Party, Mario Kart), but the irritating nature of the AI makes it more of a chore than it really should be.

As said earlier, the pace of the game is one of extreme urgency — items are constantly being used, multistrikes are frequently attempted, and some of the more imaginative maps involve geographical hazards (for example, a Twister-themed level where a stray tractor or flying cow can drift across the playing field and knock players off the screen). At any moment, it seems like one of eighteen different horrible things can happen to a player or team, and the game takes on a very, very frantic pace. This results in a pretty steep learning curve — I can definitely imagine some players getting frustrated of the constant barrage and giving up on the game altogether — but if you’re willing to really buckle down and put some time into it, you’ll be able to look past the more chaotic moments and experience a challenging, frantic psuedo-sports experience.

It must definitely be said, however, that if you can’t find another living, breathing human to play Charged with, the game loses damn near all of its value. The goaltending is less fun, the teamwork aspects are all but missing, and the overall package is infinitely less satisfying. Play this game with friends (in person and/or online), or not at all.

In giving a final, numerical score to the game, I rated it as someone who had the opportunity to play it with my three best friends — had I been forced to review this game after playing it on my own, I am certain the score would be at least three or four points lower on the 1-10 scale. 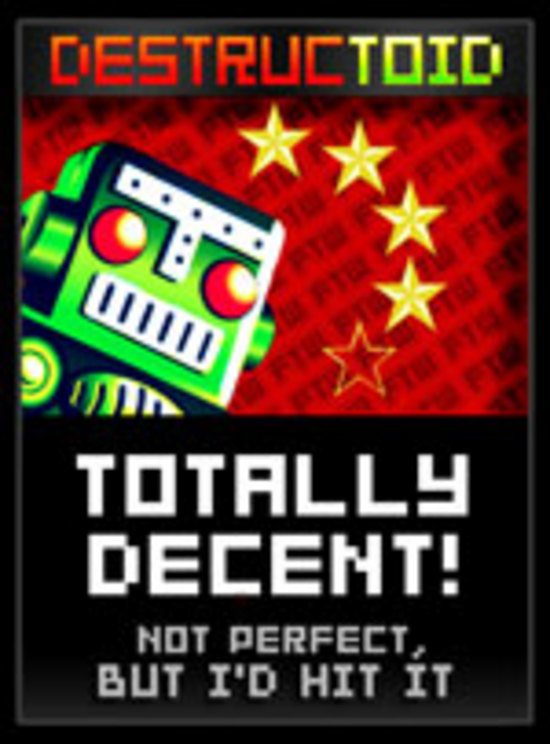 Verdict: Buy It if you have reliable friends to play with or a functioning online connection. If your only option is to play it on your own, Forget It.