For many of us, it’s been over 15 years since we threw down our first banana peel, or sent our first turtle shell screaming towards the bumper of a go-kart. In 1992, when Nintendo released Super Mario Kart for the Super Nintendo, they arguably may have permanently changed the way multiplayer, arcade-style videogame racing was played. The immense popularity of the series spawned sequels that have appeared on every Nintendo platform to date, each time delivering a solid and entertaining experience, if never really offering up any real surprises.

It’s now 2008, and Nintendo is delivering their latest and sixth installment of their popular franchise to the outrageously successful Wii console. Despite the fact that the console has been touted as groundbreaking, innovative tech that is destined to change the way we interact with videogames, Nintendo have decided — for the most part — to play it safe with Mario Kart Wii. The result is another solid entry into the series, one that should feel familiar and comfortable for kart racing veterans.

But do I think Nintendo’s decision to toe the line with Mario Kart Wii has paid off, or have I come to the conclusion that, “If you’ve thrown one banana peel, you’ve thrown ’em all”? Hit the jump to find out.

To begin, Nintendo has designed and shipped with Mario Kart Wii a steering wheel shell that is meant to encase the Wii remote, and is clearly being pushed as “the way to play.” By taking advantage of the Wii’s motion-sensitive capabilities, the Wii Wheel is meant to not only give players a different tactile experience with the title, but also a way to shed — and I’m quoting Nintendo’s Mario Kart Wii review press materials here — “complicated button combinations and joysticks.”

In all honesty, the Wii Wheel felt much better in my hands than I had anticipated. While really only a plastic shell, the peripheral gives a weight to the Wii Remote that was clearly missing with earlier racers like Excite Truck. The wheel is just about the right size, about half the size of what you’d expect to see in a conventional automobile. Design-wise, the Wii Remote slides in snugly and quickly, and comes out just as easily (provided you don’t have your remote encased in that ridiculous rubber jacket). In your hands, the wheel and remote sit in such a way that all of the buttons are in places that make sense, and even novice gamers should be able to pick up the wheel and make it around a track without much issue.

The Wii Remote can be used solo in “handle bar position” without the Wii Wheel peripheral, but it’s not recommended (and not even mentioned in the game’s instruction manual). Without the plastic shell, the remote has absolutely no weight to it, and is particularly difficult to use after you’ve played with the Wii Wheel. To make matters worse, the “use item” button — mapped to the “B” button behind the remote — is in an awkward position when using it alone (the Wii Wheel is designed with a protruding button that fits comfortably on your left forefinger). 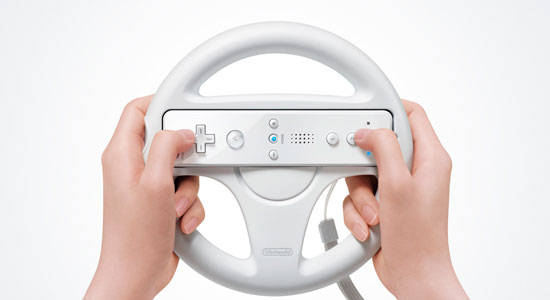 Out of the box, you’ll only have one Wii Wheel peripheral, but fret not — the game can also be played using a number of different methods that utilize “complicated button combinations and joysticks.” Mario Kart Wii supports the Wii Remote and nunchuk, Classic Controller, and even the Nintendo GameCube Controller. Of the four control methods available, I personally found the Wii Remote and nunchuck to be the most accurate and rewarding of the bunch. With the Wii Wheel, I found some of the game’s tighter turns became an issue with some slight unresponsiveness; by controlling vehicles with an analog stick, I felt I had more accurate control, which ultimately led to better times and more races won. And because some of the game’s shaking and tilting aspects become relegated to the out-of-the-way d-pad when using the Classic or GameCube controllers, the two options were the most awkward of the bunch.

While some may shun the “complicated button combinations and joysticks,” Mario Kart has never been a deep or complicated racer, and anyone with the desire to play the game should have no problem with any of the control methods. When it boils down to it, what control style you feel comfortable with is going to be a personal preference. For some, the Wii Wheel will be the only way to go, and I certainly couldn’t fault them for that; in many ways, the wheel is the only thing that truly separates the Mario Kart Wii experience from the games that came before it. For those more comfortable with traditional methods, the more classic-style controllers will do the trick. Each control method is capable of the same functions; it’s just a different means to an end.

Regardless of what you choose, the core mechanics of Mario Kart Wii haven’t been changed very much from the other titles. The addition of bikes offers up a bit more variety, but no real big advantage over the traditional karts. Both karts and bikes can do “tricks” off of jumps by simply waggling the Wii Remote, and will give you an extra boost of speed once you land. When on two wheels, pulling back on the Wii remote will allow you to pop a wheelie, giving you a temporary boost of speed, but making it more difficult to steer. To balance this, karts are able to perform two levels of Mini-Turbo boosts coming out of power-slides, whereas bikes are only able to perform one. 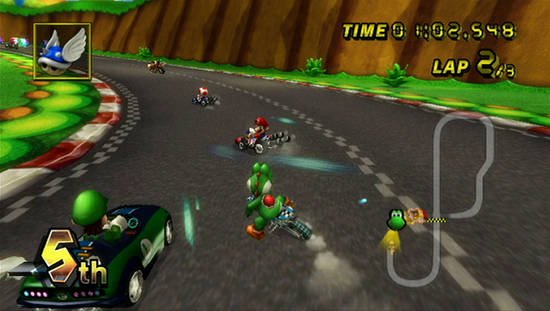 The game features 24 selectable characters (plus your Mii, once unlocked for play), each of which fall into their own weight class; thus, they can use different types of bikes or karts. The characters and their particular karts seem balanced, and what you’ll feel comfortable with is really going to depend on your playing style. Regardless of who you choose, every character is still susceptible to some of the “unfair” special items that are strewn throughout each level. Like previous games, even the most skilled players who find themselves in first place can be taken out by players behind them, due to the game shelling out (no pun intended) some of the more powerful items to those lagging behind.

In both single and multiplayer games, it’s not uncommon to find a flawless race thrown to the wolves when less skillful players use something like a “Spiny Shell” — which goes directly to the player in first place and explodes upon impact — to take you out. This is particularly frustrating in some of the single-player modes, when you might find yourself getting hit by multiple race-ruining items while cheap, rubber-band AI characters zoom past you to take the lead. Frustrating as this is, it’s nothing new with the Mario Kart series, and in multiplayer games it can lead to plenty of yelling, and otherwise entertaining races.

Mario Kart Wii is without a doubt the most full-featured game in the series, with a single-player experience that should keep players busy honing their skills alone for a while. At the outset, the game has 16 unique tracks, 13 drivers, and a number of karts and bikes that must be unlocked by completing the game’s seven cups. That is to say nothing of the time trial and ghost modes, all of which should you busy for quite some time. But what really will keep players on Mario Kart Wii beyond the unlockables is the game’s shockingly robust online multiplayer features. 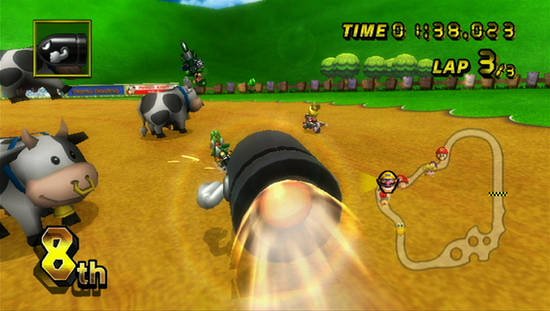 Nintendo hears a lot of noise about their shoddy online support, and if anything is going to shut up its detractors, it should be Mario Kart Wii. Yes, the appallingly stupid “Friend Code” system is back, but once friends are added, tracking them for online games, going head-to-head with their ghost racers, and tracking stats is a snap. Finding and connecting to random games online was never really an issue for me this past week, which is particularly surprising since the only gamers I was connecting with were overseas and other journalists, since the game hadn’t yet shipped to retail. I ran into no problems with dropped games or lag, either, and my online experience was so smooth that I may even choose to ignore the deplorable lack of voice chat in this review. (Wait, I think I just mentioned it, didn’t I? OK, I’ll leave it at that.)

The game’s built in “Mario Kart Channel,” which can be installed to the Wii Menu or accessed in-game, is also a pleasant surprise. It acts as an online hub for all things Mario Kart Wii, including leaderboards (local and international), in addition to being a way to see if any of your friends are currently online (along with giving you the option to join them). Although none had been available during my time with the game for review, the channel also promises to be the central location for Nintendo-sponsored Mario Kart Wii online tournaments, which should definitely lend quite a bit to the game’s overall longevity. 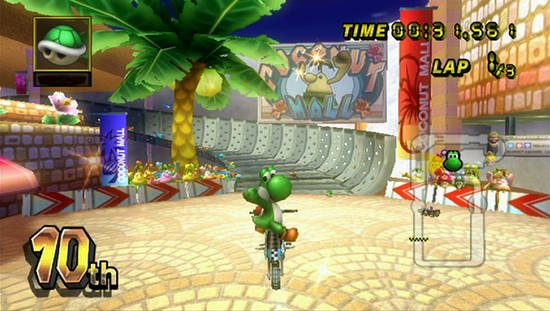 For anyone who is a fan of the series, it shouldn’t be hard to get over the lack of true innovation or that there’s barely a discernible bump in visuals over Mario Kart: Double Dash!! on the GameCube. Newcomers will find a fast-paced, easy-to-play title that relishes in its own ability to capitalize on the wacky approachability and fun of Nintendo’s mascot characters. In the past, what made Mario Kart great has always truly been about fun, friendly competition between four friends on one couch. With the addition of the rich online functionality, now social misfits no longer have an excuse.

Despite the fact that the basics of the game have remained nearly identical to the title that we fell in love with 15 years ago — we’re still tossing turtle shells and shouting when we slip on banana peels — it’s hard not to recommend Mario Kart Wii to anyone who owns a Wii. The short version of this review is “Yeah, it’s Mario Kart … on the Wii,” and for many, that should be enough.