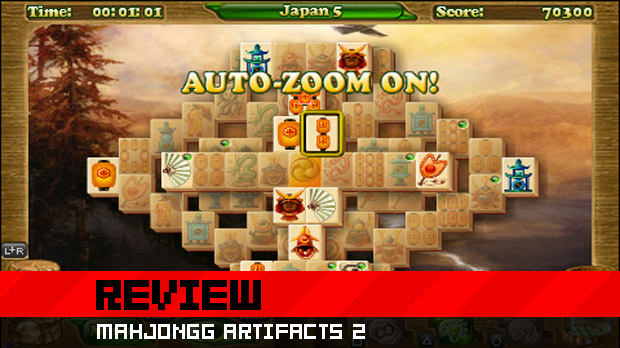 It’s mahjongg. I’m not going to tell you that this is some groundbreaking videogame. But I will say that I played the hell out of this title. It seemed to fill some gap in my PSPgo library that I didn’t know needed filling. Some days I played this title until my eyes became crossed.

This is Mahjongg Artifacts 2, a PSP minis title. The “2” in the title implies that there is a Mahjongg Artifacts 1. I never played the first one, but that didn’t stop me from giving several hours of my life to tile matching and stereotypical Asian background music.

Is this particular PSP mini worth the asking price? I think so, but then again, I like mahjong.

It goes down as always: Tiles with different pictures are spread out on a board. You pick the ones that match and remove them from the board, with the goal of removing them all eventually. The rule, as always, is that you can only remove tiles that are not covered, and are open on their sides. If you’re rusty or new to mahjongg, the title comes with a solid tutorial to play through.

Pairing tiles is much more fun that it sounds, and the spins that Mahjong Artifacts 2 puts on the classic game keeps things interesting. Random tiles have an embedded pearl in them, and a successful match with these tiles frees the pearl for your collection. These pearls can be used for special moves to help you along. These moves range from rewinding your last move to shuffling the entire board to help you out in a pinch. On top of that, special game tiles do similar things, like freeing up stuck tiles. Both of these twists add a bit of new strategy to the old game. I found myself hoarding pearls to make sure that I was able to dig myself out of bad plays.

The game boards represent different locations across the world, and the tiles’ art changes accordingly. This is all to draw the player into a story that is told before game boards are laid out. These stories are presented in comic book style. Unfortunately, the story makes little to no sense to me, and the art for these comics ranges from bad to just plain sad. I suppose that if I had played the first game, the story elements would be a tad bit more interesting, but from what I saw, it didn’t seem like it was going anywhere.

The art is pretty bad.

Fortunately, the mahjongg action is good. Game boards start out simple, but become insanely complex (in a good way) as the game progresses. In these later stages, I found myself wishing that the d-pad-controlled tile selection was a bit more intuitive. It works, but sometimes it’s hard to determine which tile you’ll be selecting with directional presses. A free-moving camera, controlled by the analog stick and L and R buttons, makes navigating these large game boards a bit easier. On top of this, hitting the select button toggles a highlight function that shows only playable titles. It’s kind of a cheat, but it makes the d-pad problems a bit more tolerable.

Look, it’s mahjong. This isn’t the next big thing. It’s a fun, casual game that will fill in the gaps between your action games and hardcore role-playing games in your PSP library. It’s a great road trip game, with its 100 game boards and various game modes. I can wholeheartedly say that it’s worth the $3.99 asking price…if you like mahjong.