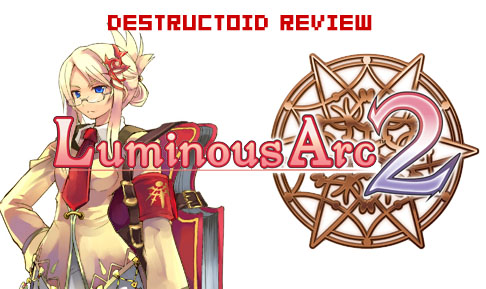 Let’s face it: at their core, all strategy role-playing games are very similar. Players find themselves positioning characters on a grid, managing resources and calculating strategy to take down the enemy. Battles follow an attack-and-be-attacked pattern, and other than some minor changes to the formula, the battle systems are very similar in these games. After battle, story segment follows, and then another battle begins.

Because of this, it seems that the success of SRPGs relies heavily on overall challenge, presentation, story, and writing. When a title falls flat on those points, it’s usually written off as a poor clone of the last “great” SRPG.

Last year’s Luminous Arc seemed to fall flat on a couple of these points, mainly in presentation and story. It’s sequel, Luminous Arc 2, seems to have taken the issues that didn’t work in the first game and improved upon them. Sure, at it’s core, it’s still a strategy role-playing game, but a new story and improved game play may have been just what this franchise needed.

One of the best words I can think of to describe Luminous Arc 2 is lively. There’s plenty of funny parts, serious bits, and a fairly large, twisting story line, but there’s a lively streak throughout the story. Unfortunately, reading any description of the story line will most likely be disappointing, as the story is about as standard as it gets.

Roland, a knight in training, becomes the kingdom of Carnava’s unlikely hero when something called the Runic Engine accidentally attaches to the back of his hand. With this new development, the queen sends him on his way to unite with the god witches of the Rev Magic Association. These lovely ladies that can help him become a Rune Knight, enabling him to use magical attacks. The knights and witches unite to go against the bad witches and save the world.

While the story isn’t the most innovative, the writing for the dialogue is fantastic. There’s a huge cast of characters in LA2, and each has been given their own voice and quirks with this great dialogue. 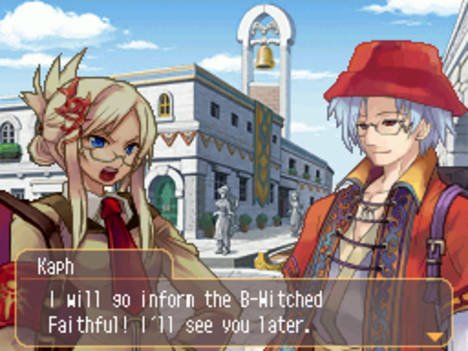 It seems that there was some real work done here to help these characters appear a bit deeper than your stereotypical ragtag group of adventurers. You’re not just a bunch of kids on a mission to save the world. This time you have the world’s most powerful witches on your team. Oh, and a mini-chef that attacks with a kitchen beater. There’s a busty, always-thirsty water-obsessed witch that wears a shell on her head. There’s also an artistic magazine editor/otaku that’s always trying to photograph every female. And a girl obsessed with crabs. In all, it’s a very colorful cast, and you’ll find yourself being drawn into the story as the characters grow on you.

And the story itself manages to have a few unexpected twists and turns. Don’t expect anything groundbreaking, but it definitely works as far as entertainment goes. The story is highlighted by spoken key lines of decent quality. With the large amount of dialogue in this game, most of it had to go unspoken, but there’s just enough spoken lines there to spice things up.

The overall presentation of Luminous Arc 2 is pleasing. The character design and art are great, especially in the dialogue screens, where you’ll see detailed busts of the characters. The backdrops and battle maps are bright, clean and colorful. There’s also a very nice anime-style introduction movie, complete with the original Japanese opening song. And speaking of music, the score to LA2 is stellar as several top-name composers contributed to the soundtrack. I found myself enjoying this title with headphones on. 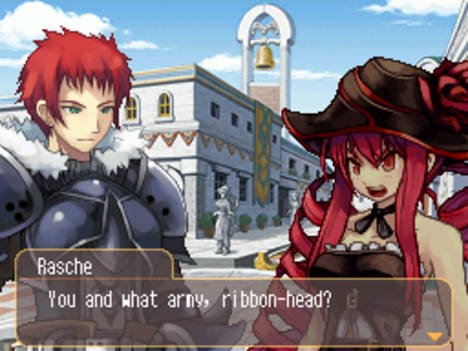 When you’re not running around the kingdom with lovely witches, you’re in battle with the bad ones. Game play takes place on a standard strategy role-playing game grid, where you’ll take turns moving your characters and attacking/defending across a given map. The changes to this standard formula are few, but they’re interesting enough to keep things moving in battle.

The first is the “Engage” system, which lets Roland borrow elemental magical powers from the witches that are in battle with him. This allows him to perform a powerful attack laced with that witch’s element. Naturally, you’ll work to pick the best elemental power to take advantage of your enemies’ weaknesses. Strangely enough, each “engage” command is followed by a full two-screen image of his chosen witch in a wedding dress. We’re not sure of the reason behind this, but it’s pretty, and kind of funny. 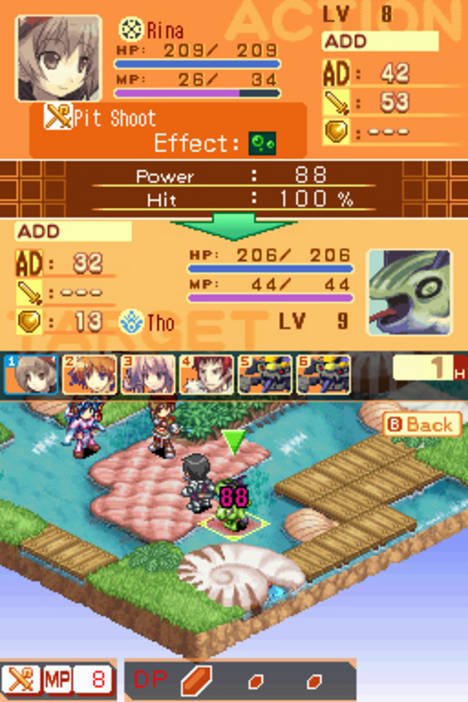 The other battle feature is called “FlashDrive,” which is sort of a charged special move. After a certain number of attacks or spells, one of three levels of FlashDrive attacks are unlocked. Each character eventually unlocks their own FD, usually matching their personality and elemental power. Strategic use of these attacks can make a big difference in battle.

Early on, the battles in LA2 aren’t that difficult, but they manage to ramp up about a quarter of the way in. You may find that some enemies have unfairly strong attacks, but success against these foes is really an issue of steering clear of them until you’ve charged up an equally strong attack. The strategy never gets too complex, and there’s just enough of a challenge to keep things moving. I did grow tired of fighting a couple of key enemy groups more than once. Every time they were defeated, they managed to pop up later, most times stronger than the previous. Thankfully, your character also becomes stronger, but a few of these battles seemed unnecessary. Some of the key battles had me restarting from save points a couple of times, but these instances were probably due to my careless charging without a plan. Nothing combat-wise in Luminous Arc 2 will require serious thought, but that’s part of what makes it so enjoyable.

While not in any way groundbreaking, Luminous Arc 2 comes together as a wholly enjoyable experience. The story is engaging and the characters are lively and fun. Those that wanted something more in its predecessor will surely be pleased. Fans of the strategy RPG genre will definitely want to check this one out.

Score: 8 (8s are impressive efforts with a few noticeable problems holding them back. Won’t astound everyone, but is worth your time and cash.)