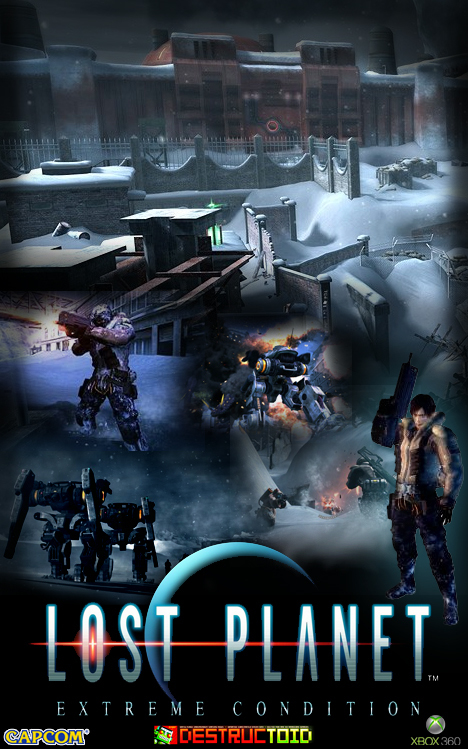 Depending on how you look at things, Capcom’s Lost Planet for the Xbox 360 was Microsoft’s latest killer app in the ongoing console war. It was one of the most talked about and anticipated games over the past few months. The question is … was it worth the hype? Find out what we think after the jump.

First things first: Lost Planet is not one of those games we can lovingly refer to as “truly next-gen.” While its graphics are beautiful and its gameplay is essentially exciting, the controls are sluggish, the camera unhelpful, and the story irrelevant.

First, the good: Lost Planet is a gorgeous game. From the snow, to the bugs, to the explosions and smoke (and by God, there are a lot of those), pretty much everything about Lost Planet’s visual style will make you glad you bought an Xbox 360. And, at first, that pride will last — as we all saw in the demo. Blasting your way through a limitless supply of Starship Troopers bugs can be very entertaining for a while, and the boss fights make up some of the most entertaining, old-school battles I’ve seen in a year or two.

And that’s more or less where the game’s strengths end. Every other aspect of Lost Planet is flawed, albeit in very new and exciting ways. Take, for instance, the fact that the game is both frustratingly hard and insultingly easy. On the one hand, your character is slow to get up and gets blown off his feet after damn near any attrack, which can lead to long stretches of time where you get hit, you fall over, and you wait three seconds to get back up before you’re hit again and you have to start the whole process over.

On the other hand, the AI is so violently unintelligent that you can literally run past armies of bugs (or space pirates) without taking a significant amount of damage or missing anything particularly important. This weird dichotomy permeates every aspect of Lost Planet’s gameplay. The camera allows for quick rotation and easy targeting, but there’s one boss fight where (while inside a mech) you have to constantly look straight up and fire at a bug’s kneecaps.

Subsequently, the camera gets really low to the ground and angles upward so you can aim, but the camera is placed in such a way that 70% of the screen is taken up by your mech and you literally have to look around your mech’s shoulders to see anything. The grappling hook is pretty fun, but you can’t fire it in midair (which would have been really, really helpful).

All in all, Lost Planet is a fantastic rental game. It requires no long-term commitment (I finished the singleplayer in about 5 hours), it’s fun in short bursts (assuming you choose to play the more difficult way and actually engage the bugs instead of walking around them), and it has one of the most boring, inconsequential, irrelevant video game stories I’ve seen in a while. While Lost Planet’s arcade-style gameplay occasionally offers some exciting moments of old-school gameplay, there’s really not enough here to warrant a purchase.

Without a doubt, in many ways Lost Planet is truly a next-generation title. The sprawling, snow-covered landscapes are awe inspiring in high definition. Explosions in the environment produce some of the most shocking effects — you can actually feel the density of the smoke as it blankets the landscape and hinders your field of vision in a realistic fashion. Snow falls from the sky as wind whips particles unpredictably, to and fro. Graphically, it’s truly a remarkable title that showcases the abilities of the Xbox 360.

The key ingredients for an enjoyable experience are all here, too. Running through areas and shooting up the Akrid (the game’s alien-bug-monsters things) is a blast, particularly when destroying them leads to such a pleasingly juicy explosion of orange guts. While your monster-hunting weapon selection is a tad limited (and completely predictable), the ability to hop into the mechanized Vital Suits (VS) adds another layer to the carnage. And when actually used, the grappling hook ability brings back fond memories of the classic Bionic Commando (and more recently, the Game Boy Advance title, Ninja Five-0).

So it’s regrettable to find that Lost Planet is a severely average shooter that suffers in more ways than it should. For starters, the game’s narrative quickly delves into slow, overly-predictable Anime territory before it really gets started. Cut scenes drag on for what seems like ages, and I had to force myself to sit through many (some of which don’t even have any music!) just so I could keep up with what was going on, and why. I guess it’s a double-edged sword that the game was so short. With only 11 missions (a few of which merely involve moving through a small area and then facing the colossal boss), the game is over before you know it; but I found myself relieved I didn’t have to sit through any more of the tired cut scenes.

The gameplay itself is overly simple to the point that, after a few missions, you’ll have seen and done nearly everything there is to do in Lost Planet. Every area involves running through a mess of enemies (either monsters or snow pirates, both of which are equally as dumb) and then fighting a gigantic boss which will either be a big, bad VS or a big, bad monster. In the case of the VS, just shoot it until it explodes; in the case of the monster, target its orange eye/stomach/nose/anus until it turns red and explodes. Realize that when I say “running through a mess of enemies,” I truly mean it — while fighting enemies in many of the areas might increase your chances of survival (and fun), feel free to run by all of them until you reach the boss. Capcom apparently doesn’t mind; they already have your $60.

While I certainly respect and see where my comrades are coming from with the single player side of Lost Planet, they seem to have forgotten the real reason to own this game: multiplayer.

Hell, it’s the reason to own most shooters nowadays. While the single-player portion certainly has its moments, playing online is really where the action is and where the game shines. Before you jump into it though, know and understand this concept: organized chaos.

Why do I say that? Because that’s what Lost Planet’s multiplayer is. It’s not so much jump in and dominate like other generic shooters, but instead a complicated mess of chaos that you’ll soon unravel with more and more play time. With the amount of action going on with VS (mechs) and bodies and explosions and objectives, you’ll think Gears of War multiplayer was a quiet walk in the park.

So, if you’re like me and merely run through a couple hours of single player before getting into what you really want to do — multiplayer — then Lost Planet is a perfect destination. In many ways, it’s a refreshing departure from the standard shooter’s multiplayer. Pick it up, try it out, and you’ll see what I mean.