The original LocoRoco put you in the middle of an invasion. The ink-blotted Mojas upon the limbless LocoRoco’s world in an attempt to enslave the bright blue BuiBui. You’re job was to repel the invasion by defeating its snarling leader. If you stuck with the original title for a little more than seven hours, you managed to defeat the big man and deliver the planet from evil.

Sony’s second installment of LocoRoco (hits retailers on February 10) pits the smiling, happy-go-lucky LocoRoco against the Mojas yet again. This time, the big evil man has a few aces up his sleeve. He has come into possession of a song that takes drains the world of color and has been palling around with a bright red race of little dudes called the MuiMui that can drive rocket ships and drop bombs.

Do you have what it takes to defeat the Mojas? Probably. It only takes about six hours. Hit the break for the review of Sony’s PlayStation Portable title, LocoRoco 2. 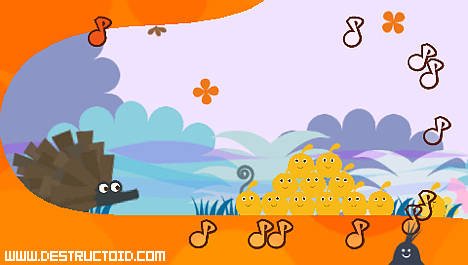 My favorite games are the ones with personality. Epic’s Gears of War leaps into mind as a great example of a game that manages to convey a profound sense of character. Gears of War’s overarching theme of futility colored the environments and character interactions just as much as the Lancer impacted the flow and intensity of action. LocoRoco 2’s mojo isn’t derived much differently than Epic’s pulse-pounding shooter — just replace the guns, violence, and ravaged environments with adorable happy things.

The core gameplay of LocoRoco 2 has been preserved and carted over from its predecessor. The star of the show is the rotund LocoRoco. It’s limbless, so its only mode of transportation is its spherical body. You roll the LocoRoco through levels by tilting the environment with the trigger buttons. Pushing in these same two buttons (or letting go of one) will allow your LocoRoco to jump. The majority of obstacles in every level are cleared with these two elements, but don’t let the simplicity fool you — LocoRoco 2’s superb level design and interactive environmental objects will keep you guessing what’s coming next. Almost every new level introduces a new element to fiddle around with: One level you’ll be pushing a gelatin egg into a bird’s nest, and the next you’ll be catching a ride on the back of a sea creature.

In addition to surprise design, a variety of new abilities and minor tweaks have been introduced. Your LocoRoco can now latch onto objects, swing, and swim. Swimming is the only major new element, as some levels rely on the ability heavily. However, the other new stuff is handy for finding the variety of hidden objects scattered throughout levels. 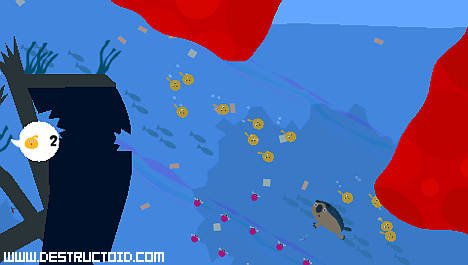 And there are tons of hidden collectibles. None of them are as important as berries. The normal variety functions as currency for mini-games, but eating the large ones produces an additional LocoRoco that merges with your initial one, causing it to grow in diameter. Extra LocoRoco function as both a health meter and a mild puzzle-solving device. Pushing the circle button summons a thunderclap that disassembles your rolling blob into its lesser parts. Holding that button reassembles them after the task is completed.

As appreciative as I am for LocoRoco blobs, I find myself more enamored with LocoRoco 2’s level design. Every world in the game has a different look and comes with a wild assortment of environmental objects to interact with. Perhaps the best part of the design is the striking variety of gameplay. Some levels put you underwater and others focus on the game’s jumping physics. Even though the levels differ, the tone of the game always stays the same. LocoRoco 2 possesses a carefree attitude, punctuated by a ridiculous amount of smiling and charm with every new foe, friend, and object you encounter. The game rarely frustrates, as its happy-go-lucky puzzle solving mechanics seem to creep their way into your brain and fry any ability to get upset.

The game’s biggest sore point is its lack of substantial playtime. The game’s 20-something levels can be tackled in four to six hours. You can stretch the limits by collecting objects (berries, items and hidden MuiMui) but I never felt compelled to retread levels. Getting 100 percent doesn’t net you anything beyond a light pat on the back in the way of items to redecorate the MuiMui House. That’s not to say that the game lacks depth: it’s there, but only if you want to pursue it. 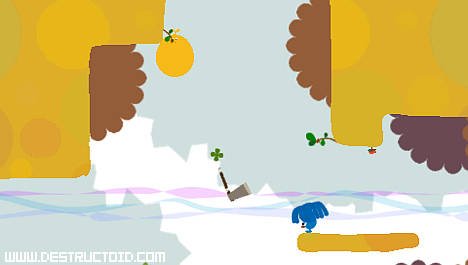 Visually, the game never disappoints. The 2D art is sharp and adorable. It’s as if the artists stared at a basketful of puppies and were able to successfully encapsulate what makes that scene so delectable. The pastels used to color the game are even better than the aforementioned basket o’ puppies. The game is vivid, bright and bursting with happy images and whimsical backdrops. A brilliant complement to the visual flair is the game’s music and integration as a gameplay mechanic. The tunes are soft and cute like everything else in LocoRoco 2, but more importantly, they now have a purpose outside of subtle entertainment. As you progress, you’ll meet and unlock other multi-colored LocoRoco to play with. Depending on whom you choose, the default music applies minor tweaks that associate with the LocoRoco. To aid the MuiMui, you can also stop and sign to trigger events in the level. Instead of staring blankly at the screen, the game challenges you to keep rhythm with the song.

The subtle twists and new abilities (such as the new rhythm game) build on the foundation that the original game had. LocoRoco 2 doesn’t go out of its way to differentiate itself from its predecessor. That isn’t always a bad thing — the same characteristic charm, visual flair, and stellar level design is present in LocoRoco 2. Unfortunately, the game is even shorter than the last go-round and suffers from the same demons.

LocoRoco 2 is a great title at a great price point. Its misgivings — short playtime, lack of narrative substance and meaningless collectibles — are easily trumped by the game’s character and solid gameplay.