Lock’s Quest is a game that has been scarcely covered, and I have no idea why. Despite being published by the rather notable THQ, it seems that a lot of gamers have never even heard of this DS strategy game. That doesn’t make the slightest bit of sense.

This game is worth your time and consideration. I’ll say that right now before we even get started on the review. The lack of attention that this seems to have been given, both by the gaming press and THQ’s own PR, is surprising. The publisher has something more than a little pleasant in its hands, yet so far hasn’t been willing to show it off.

If you want to know why THQ should have boasted about this one, read on for the full Destructoid review of Lock’s Quest. 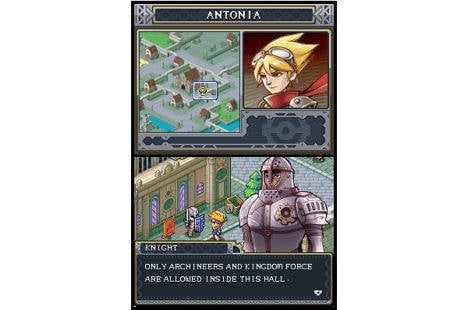 Lock’s Quest tells the story of a boy called Lock, an archineer who is able to use a special energy supply called Source to build structures, forts and weaponry. As with so many game heroes, Lock starts his adventure with an idyllic little life in an idyllic little village and looks after his idyllic little sister. All that changes, however, when a marauding army of clockwork soldiers attacks. The Clockwork Army is led by a sinister mage who was once thought destroyed. His name is Lord Agony, and he wants the world’s Source.

The most striking thing about this game is its presentation. When you first switch it on and hear the short, Final Fantasy-esque intro ditty, you will be surprised that this is a THQ-published game. The artistic style is terrific and the graphics are all very pleasant sprite work. The music is also incredible, with memorable tunes that manage to sound great despite the DS’ shortcomings in the audio department.

The game may look a little childish, and it’s certainly true that the story is no hard-hitting philosophical piece or emotional RPG fare. It’s inoffensive and rather standard as far as stories go, but the characters are likable and the dialog solid. It would have been great if Lock’s Quest had a truly astounding story to go with its presentation, but what’s there is not bad by any means. 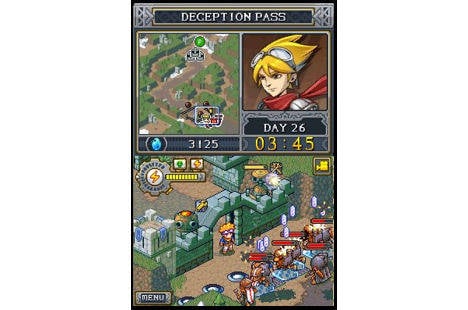 So, what is this game really about? Lock’s Quest is a strategy title that’s all about pre-planning and survival. The main bulk of the game will be spent building fortifications and then defending them from ever-increasing hordes of Clockworks. It’s a kind of Tower Defense-style experience, but deeper and richer.

Most of the gameplay is split into two phases — the build phase and the battle phase, both taking place on a gridded map. In the build phase, you get to select from a variety of walls, weapons and traps in order to protect various objects and people from the clutches of the Clockworks.

Preparation is the key to victory in Lock’s Quest, and you have only a limited amount of time to look over the map carefully, studying where the Clockworks are going to be attacking from and fortifying your territory in accordance. You will be able to build walls that block the enemy’s path, and turrets to fire at them as they approach and drain their health. You will also be able to build traps that you can dot around the map, which bestow a number of negative effects on the Clockworks. As you progress through the game, you’ll get access to more structures, traps and special helpers to aid your battles, which you construct using scrap found in battle. Once you have the scrap needed for a new construction, you will need to take part in a very simple puzzle minigame, where you find the right pieces needed to match an image of whatever you’re trying to build. 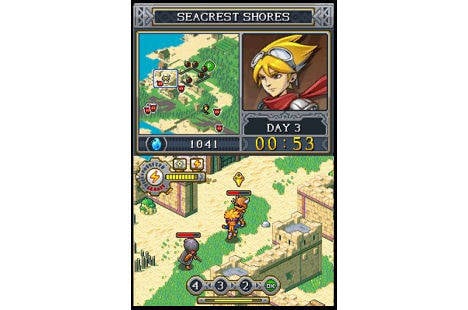 Once the building is done, the game moves onto the battle phase. In the battle phase, wave after wave of Clockwork soldier will storm your territory, intent on capturing your Source well or wreaking similar havoc. Battles are incredibly frantic affairs that task you with running from hot spot to hot spot, repairing your fortifications as Clockworks attempt to break through, and fighting them head-on. When you physically engage a Clockwork, both you and your opponent will automatically duke it out. You can shift the odds in your favor by strategically fighting them near a turret, or after they hit a trap. You will also have a variety of special moves that are activated by performing stylus prompts onscreen.

The aim of the battle is to hold your fort together until the timer runs out, at which point all Clockworks on the field will spontaneously collapse. Later on in the game, there will be other objectives as well, such as rescuing prisoners dotted around the map, or eliminating key enemies. There is also another type of battle called a siege, in which you use a cannon to destroy incoming Clockworks as they attempt to break down your wall.

The battles are bloody amazing in how well put together they are. The sense of urgency they can invoke as you single-handedly attempt to fight off a two-pronged attack, or are trying to defend multiple Source wells, really keeps you on your toes. Fights also seem perfectly paced as well — just as you begin to feel like you might be overwhelmed, the timer runs out. Nearly every battle gives you that last-second “saved by the bell” feeling. Each victory, in turn, feels like a real triumph against the odds. 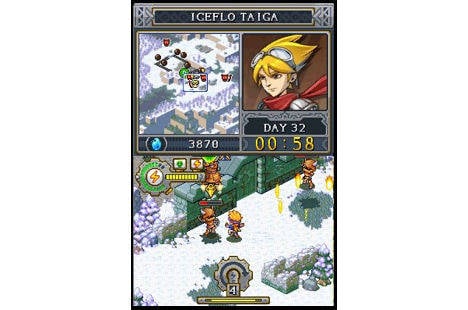 The majority of the game is based around the stylus, but the interface is a very simple one, meaning that things rarely get confused. Although movement is performed with the stylus — something I hate in all games — Lock can be commanded with a point & click style of direction as well as a more manual one. You can also use the D-pad to move the camera around, which can actually help you with your controls tremendously once you learn to let the camera do some of the guiding.

The game has its problems, certainly. The isometric viewpoint can sometimes confuse when you’re trying to build things, and it can be frustrating placing everything where you want it. In battles, objects and people can often get in your way, something that stylus controls certainly don’t help. These issues, however, really don’t matter very much in the long run, given how fun the whole thing is.

Some players may not like the lack of variety in the game. Although the developers have certainly tried to spice things up with sieges and extra objectives, the majority of the game will be spent building and fighting in very much the same way, albeit with increasingly difficult odds. It would have been nice if there was some added depth, such as level-ups or new equipment for Lock himself, but the game clearly didn’t set out to be an RPG and does what it wants to do incredibly well. 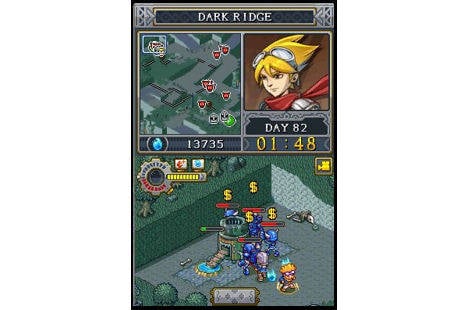 Lock’s Quest is everything a portable strategy game should be. Its battles are exciting little bursts of bite-sized panic attacks, lasting only minutes at a time, but feeling much longer. Despite a few niggles, the stylus controls work pretty damn well, helped by the clean and simple methods of control used. It’s just a really, really, really good portable game.

I would love for you to buy this. Not download it, but actually buy it. It’s worth the money, and given how little advertising this game has had, it definitely needs it. This is the type of DS game that we, as gamers, should be rewarding with our cash. I want a sequel to Lock’s Quest. I want anybody who will enjoy this game to help contribute to that happening.

It really is that good.