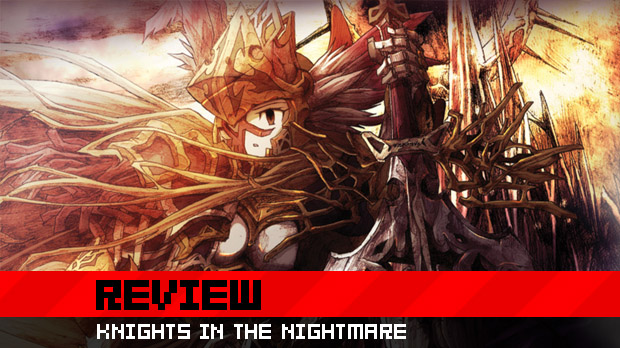 You’ve never played anything like Knights in the Nightmare. How can I be so sure? Well, every time I try to explain the game play, I find that I have to explain it twice, even to seasoned gamers. But that’s not a bad thing, mind you. In fact, it’s totally refreshing, and it’ll probably make the other DS role-playing titles look dull in comparison.

If you can imagine a grid-based tactical strategy role-playing battle combined with a Japanese shoot-’em up, complete with rows of raining bullets, then you’re on your way to understanding Knights in the Nightmare. Once you wrap your head around this idea and get past a somewhat steep learning curve, you’ll be able to enjoy one of the most inventive and engrossing titles ever released on the DS. It’s totally worth the effort.

I have no problem saying that I’m extremely excited about Knights in the Nightmare. I’ve found myself talking about it often, to many people. But it’s such a deep and complex game that I feel like I’m not doing the game justice, and perhaps I’m confusing everyone I try to explain it to. Even when trying demonstrate how the battle system works to my co-workers, I feel like I’ve let the game down somehow, and it seems that all I’ve done is give them pause on what is a fantastically original title. For this review, I’ll do my best to explain how the battle system works, but it has to be said that only by trying it for yourself will you fully understand how deep and involving this title can get.

In Knights in the Nightmare you control a wisp, a stylus-controlled floating orb that happens to be the soul of a former king. This wisp can fly freely about an isometric grid SRPG-style play field where you’ll see the outlines (ghosts) of warriors of the past, as well as roaming enemies. You’ll fly your wisp into these warriors to possess them, controlling them to attack and eventually defeat enemies on this play field.

Instead of the standard hit points formula, battles in KitN have you racing against the clock. You start out with 60 seconds to battle, but every time your wisp is hit by an enemy’s attack, which comes in the form of shmup-style bullets, time is deducted from your total 60 seconds. You’ll swipe your stylus to move the wisp around the play fied, trying your best to avoid these bullets while controlling your allies in battle. You’ll also fly your wisp around to pick up items, find hidden treasure, and even equip your allies by handing them their weapons.

Each enemy on the playfield is assigned a slot on a tic tac toe-ish Kill board, displayed at the bottom of the screen. Your overall goal is to kill the proper enemies to fill in the board with solid kills, across or vertically. If this doesn’t make complete sense, take comfort in knowing that the game provides an in-depth tutorial and a full help system to guide you. Going through all of it will take about an hour, but again, this game is worth the effort.

Knights in the Nightmare‘s story slowly unfolds. You begin as this wisp, void of all memories or direction. Eventually you’ll meet up with a mysterious woman named Maria, who helps give you direction and some aid in battle. With her help, eventually you’ll uncover more about your former self as well as what’s happened to your kingdom since you died. Between battles you’ll get just enough story detail to lead you into the next battle. You’ll also get a touch of the setting and a flashback from the past, but it will be a long while before you can put them all together in your head. The story turns out to be good, but it just takes a long time to ramp up. Luckily, there’s plenty to keep you busy between story sessions.

Knights in the Nightmare is heavy on customization and strategy options, though you don’t really have to use them to their fullest. Strategy freaks will enjoy picking through hundreds of weapon options to equip, as well as screens where you can enlist and later level up personal troops. You can pay attention to power, attack levels, elemental affinities and more if you wish, tweaking everything to your heart’s delight. Or you can just play with what the game gives you. It’s up to you, but it’s nice to know that KitN was developed to be open.

If there’s one drawback to Knights in the Nightmare, it’s how much there is going on in the screens, menus, and battles. It’s kind of overwhelming. There’s hundreds of weapons, hundreds of playable characters, countless options, numerous option screens, and almost endless customization. The small print and even smaller icons make things worse. This controlled chaos continues into the battles themselves, where there’s simply too much going on on-screen sometimes. While part of the chaos is intentional, especially when referring to the bullets to be dodged, things like equipping weapons and even sometimes seeing your own troops on screen becomes difficult because there’s too much going on. It feels like even 10 percent more screen real estate could have benefited the game as far as this sometimes cluttered feeling goes. Even though I reviewed the title on the DS Lite, I did have a chance to try it on the DSi, and the larger screen seems to help a little bit.

Aside from the cramped feeling in the menu and sometimes battles, there’s plenty to appreciate about Knights in the Nightmare’s appearance. First off, the character design is beautiful, as are the story sequences. Though dark, lush colors and soft lighting complement hand-drawn characters and backgrounds. It’s also easy on the ears, with one of the best DS soundtracks I’ve heard, especially again in the story seqeunces. Sometimes the voiced battle cries can become annoying, but there’s so much going on that you won’t have time to think about them much.

In the end, no other DS title plays like Knights in the Nightmare. It’s one of those games that gives you as much as you put into it. If you invest the time to learn the game play, you’ll be greatly rewarded with a fresh, addictive battle system. This is gamer’s game that begs to be explored more. Knights in the Nightmare may not be a good fit for the casual or impatient gamer, but if you’re one that’s tired of the same old DS strategy role-playing titles, you likely be thrilled by this unique game.