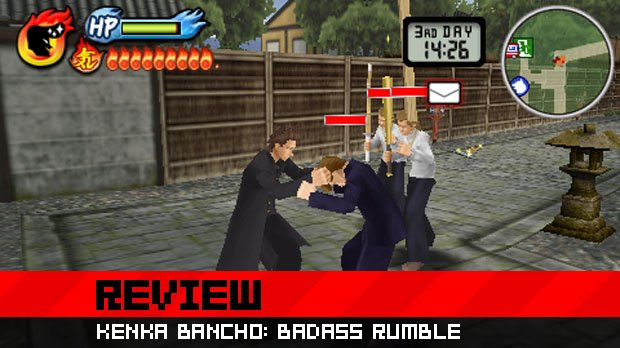 You know how it goes. There’s always that one badass at school that no one messes with. Everyone around knows that this particular badass has dignified himself by pulling enough sucker punches and breaking enough noses over the years. This mindless brute, this impossible muscle head — you usually just stay clear of him and let him do his thing while you do yours.

Every once in awhile, though, a badass with a brain comes along. Badasses that have goals. Badasses that aspire to more badassery. One particular badass in Japan gets an idea during a class field trip: He figures that if he can take out every other school’s badasses, all of which are likely in the same place for the same field trip, he could rule over the entire country.

This is the idea behind Kenka Bancho: Badass Rumble, a new PSP game by Spike, brought over by Atlus. Can we write a review where we don’t interject “badass” to describe the game? Let’s see.

In Kenka Bancho, you play as this badass, a delinquent that the Japanese call a bancho. As soon as your bus arrives in beautiful Kyoto, you can start causing trouble, just like any good bancho. In fact, you’re encouraged to cause trouble, as that’s they only way you’ll earn the respect of all the other schools’ bancho out in Japan’s most popular field trip spot.

You’re free to bash in the face of any bystander or citizen of Kyoto in this sandbox-ish game, though you’ll get farther by taking on punks from other schools. By doing this, you’ll not only increase your fighting power, but you’ll come across clues that lead you to where your fellow bancho will be during this week-long field trip. Armed with other schools’ itineraries, you can be at the right place at the right time to take down each bancho, one by one, until you’ve dominated Japan, all from the lovely scenery of Kyoto.

The game plays out in the seven days of this field trip, giving you a limited time to become the head bancho. You’ll have to check your watch often, as you don’t want to miss key battle opportunities, and you don’t want to get in trouble for missing curfew. Sure, you could wander around town to check out the sites, but you’ll end up going home the same way you came, missing the opportunity to be the bancho.

Hurry up and die — I have a text message!

Kenka Bancho is an action brawler, a beat-em-up, meaning that your rise to the top will involve plenty of kicks and punches. Two face buttons do most of the action, but there are also throwing and blocking moves. As you defeat other thugs and level up, you’ll be able to customize your fighting movesets by adding new moves. Everything from slaps to wrestling moves can be earned, and they help mix up the fight.

Movement is controlled by the PSP’s analog nub. You’re free to move in 3D space, which is mostly fine for non-battle navigation, but becomes a bit troublesome in a fight. It sometimes becomes difficult to pinpoint the direction you need to face to correctly land a punch or kick with the analog nub. The camera, which is manually controlled with the d-pad, makes things even a bit more hairy. Luckily, most encounters involve only a few opponents, and the game is pretty fair about not dog-piling you while you’re trying to figure out the controls.

Initiating a fight is as simple as punching someone upside the head, but there’s a more stylish way to propose a squab. A stare-down with your “menchi beam” sends bolts of murderous intent from your eyes. You can guide this beam into anyone else’s eyes. Some may run off in fear, but those prepared to take on your challenge will confront you. Trash talk happens after this, and you’ll work to throw out some of your own in a timed button pressing minigame. Do it right and you’ll throw out harsh words, giving you the fight advantage. Do it wrong and you’ll look like an idiot.

Kenka Bancho: Badass Rumble won’t win any awards for presentation, though it is not that bad for a PSP title. The 3D models of the characters are pretty basic, and there’s really not much going on to differentiate them from each other, as everyone is in school uniforms. The story elements are a tad bit more visually interesting, though facial close-ups and rough eye and mouth animations look like what you might expect from an early PS2 title. There is a nice visual style overall, though, and the backgrounds and settings keep things interesting. The musical score ranges from saxophone-laden elevator music to energetic guitar rock. Unfortunately, you’ll hear these same songs over and over, and you’ll likely grow sick of them before the game is over.

This game is bananas.

As you’d expect from a game that revolves only around kicking and punching, things can get a bit repetitive. It’s not a deal breaker, though. Thankfully, the fighting manages to stay fun, and there is enough story elements and and interesting setting changes to keep you going. Again, props to the localization crew at Atlus, as the game’s story and dialogue are quite funny. In all, there’s enough here to keep you playing.

There’s plenty of enjoyment to be found in Kenka Bancho: Badass Rumble. I found that the game was best appreciated in small doses, though. It makes for a solid portable game, as you can switch your PSP on, beat some ass, and then shut it back off. If you’re looking for innovation or depth, you’ll have to look elsewhere. This is a game that does not take itself seriously. Kenka Bancho: Badass Rumble is all about mindless fun, and we think that’s pretty badass.