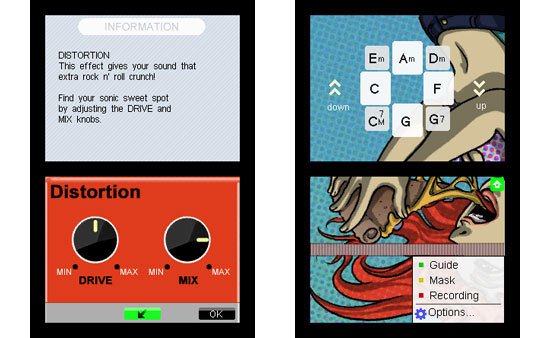 At the tender age of 13, I picked up a guitar for the first time. A cheap acoustic number with strings whose gauge are illegal in most parts of Eastern Europe, the tips of my fingers nearly bled as I forced my digits into unnatural positions. Hours, days, and weeks of practice later, I could play just about any song in Nirvana’s catalog.

While my dreams of being a rock star never truly paid off as a result of endless practicing, it did help me out with the ladies as I got older. Ubisoft’s non-game acoustic guitar simulator/tool for the Nintendo DS, Jam Sessions, might not be the key to success with the opposite sex, but it may be the easiest way for someone to pick up and “play” the guitar.

So is Jam Sessions a pocket-friendly replacement for an acoustic guitar? Or is it the answer to all of your portable Guitar Hero dreams?

Based on the Japanese DS title, Sing & Play Guitar DS M-06, Jam Sessions is less of a game, and more of a music making and learning tool. It is a bit of an experiment in that it’s really the first of its kind on any handheld platform. While it can be likened to Nintendo’s Electroplankton in that it is open-ended sound-making software, its focus on a very specific real-world musical instrument make it unlike anything else on the market.

In an attempt to turn your Nintendo DS into an acoustic guitar, Jam Sessions uses the DS touch screen to simulate strumming real-life strings. Chords are selected with the D-pad, and can be changed on the fly as you strum. The d-pads chord “palette” can be edited for a full range of chords, essentially opening up the opportunity to play any of your favorite summer camp songs.

Changing the speed and power of your strums will change the sound of the chord, just like a real guitar. And while you’re only strumming one fat string across the screen, choosing to strum up or down will also change how the chord sounds. Because of this diversity and authenticity of sound, Jam Sessions does a pretty decent job of turning your DS into a virtual acoustic guitar.

Unfortunately, that one fat string is Jam Session‘s biggest disadvantage. Because your strums are essentially “all or nothing,” there’s no way to pick out individual notes, somewhat limiting how you can play. Any aspirations to play a note-for-note version of Led Zeppelin’s “Stairway to Heaven” are thrown out the window, which is somewhat disappointing. But for anyone looking to accompany a lead or simply flesh out some rhythm ideas for a song that’s been running through their head, Jam Sessions is the perfect tool.

Transitioning between chords is not perfect, though.  With chords mapped on opposite ends of the D-pad, the  change between the two chords can sound stilted and unnatural.  Also, pressing the L button to switch to  the D-pads second sound palette of chords feels awkward , especially while attempting to strum the touch screen. With time, a lot of this becomes second nature, but kept me from getting truly natural sounds out of the software. 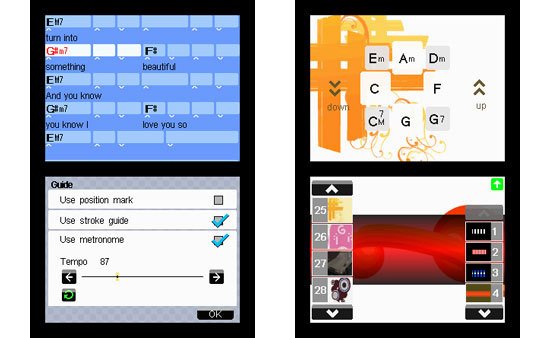 To round out the package as a guitarists portable sketchbook, Jam Sessions features the ability to record up to five performances that can be played back at a later date (a feature Electroplankton was sorely lacking). The game also features a number of effects: distortion, low cut, high cut, delay, chorus, flanger, and tremolo. Each is tweak-able using the DS stylus and on-screen knobs, and two can be used in tandem, opening up a nice range of sounds for use with the virtual guitar.

While Jam Sessions main draw should be as a tool, there are some aspects of it that can lean towards “game” game territory. 20 songs are included with the software, from Coldplay’s “Clocks” to Avril Lavigne’s “I’m With You.” Along with each song is a chord progression, lyrics, and in some cases, a song demo. You simply pick a song from the track list and play along — there is no musical accompaniment, save for an optional metronome click track.

In “Song” mode, there is no penalty for errors; you simply play along with the chords indicated on the screen. You can make as many mistakes as you like, strum in any fashion you see fit, and go at your own pace. When the song is complete, you’re not graded, but the game simply informs you that you did a “good job,” complete with a condescending little smiley face. Jerks.

It’s nice to have on-screen guidance for songs you might have never intended to play, but with “backing band” to even play along with, the mode is essentially useless. Any given number of tablature Web sites could give you the same information, for songs you’re actually interested in playing no less. Like Slayer’s “Angel of Death.”

To answer the original question, Jam Sessions is certainly not a replacement for a real acoustic guitar. And given the shallow nature of the “game” portion of the software, you’re not going to be able to milk the same kind of fun out of it as you would with something like Guitar Hero.

But as a musicians tool, and one of the most innovative uses of the Nintendo DS touch screen to date, Jam Sessions is a success … but I’m pretty sure it won’t get you laid.